‘Party Down South’ Is the Worst Thing Ever 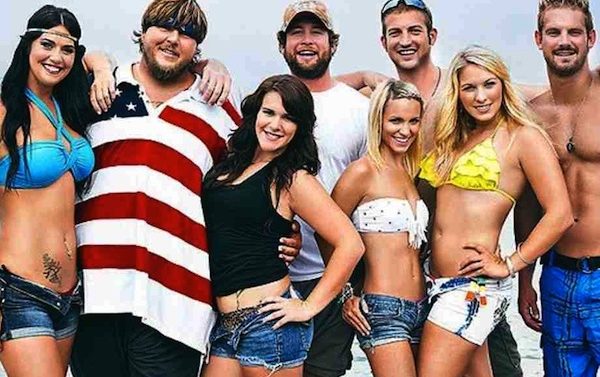 For the past few months, Flagpole Music Editor Gabe Vodicka and I have been having a really good time blogging about and making fun of “Party Down South,” the CMT reality show about eight self-described rednecks slowly killing themselves with alcohol, Leaving Las Vegas style.

We sent writer Rashaun Ellis out to find out what indignities the cast had inflicted upon themselves and our fair city while filming season 2 in Athens, which Rashaun (jokingly, I thought) treated as some kind of punishment. Gabe and I thought we’d recap each episode, starting with the first one on Thursday, June 5. “It’ll be fun!” we told ourselves. No. Because “Party Down South” is the single most depressing and cynical thing I’ve ever seen in my whole life, and this will probably be the last article we ever write about it. Seriously. It’s that bad. Don’t watch it. Not even ironically.

The season premiere opened with a brief update on what the cast had been up to since season 1, filmed in the beach town of Murrells Inlet, SC, as well as a synopsis of the last season. “We funneled a bunch a beer, shot a bunch of Jager,” one cast member said. “We partied all day, every day.”

Their definition of “party” is different from mine, to say the least. These people consume adult beverages like it’s their job—which it is. They literally force alcohol into their bodies via a “beerzooka,” which is exactly what it sounds like: “a gun that shoots beer down you like hardcore,” said the device’s owner, Daddy.

Pro tip from my wife: “Maybe if you didn’t drink Michelob Ultra, you wouldn’t have to drink 20 of them and slam them down your throat.”

Let’s talk about Daddy for a second. The show makes this guy look like he’s so deep in the closet, I don’t know how he could have gotten that tan. The frosted hair. Saying “I’m a swallower” repeatedly. The locker-room flirtation with housemate Murray, culminating in the two of them shirtless in the yard, about to rassle. If he or, more likely, the producers were playing this for laughs, they ought to be ashamed of themselves. If not, this guy needs a therapist. Just be yourself; no one cares. (Well, a significant part of Country Music Television’s core audience probably cares, but get over it.)

Daddy, however, was also upset that fellow cast member Lil Bit (these nicknames are so stupid) got a boyfriend. At one point he was shown crying and mumbling incoherently to that effect.

Anyway. Halfway through the show, they finally arrive at their house, which is reportedly in Oconee County but might as well be in Wisconsin. Red solo cups were strung up along the porch roof like Christmas lights. There was a toilet outside that doubled as a flowerpot, chickens in the yard and an outdoor refrigerator, helpfully labeled “beer,” that by the end of the show the cast members were too drunk to even figure out how to open.

They started joylessly doing shots. “I’m gonna pass out right here on the goddamn floor,” said Walt, the one with the baseball cap. “That’s my goal.” It’s good to have goals in life.

And so they intentionally got as close to alcohol poisoning as possible without dying and stumbled around in their underwear for a few minutes. The end. They never left the house.

On the bright side, that meant  Athens was not embarrassed on national TV; in fact, I think they only mentioned the location once or twice in the whole hour-long episode. “I’ve never been to Athens before, but somebody told me it’s a college town, and you gotta love smart boys,” said Mattie, the tall girl. I have a feeling the smart boys did not love her back.

In conclusion, “Party Down South” is not funny. It has no redeeming qualities. I’m never watching it again, and neither should you.