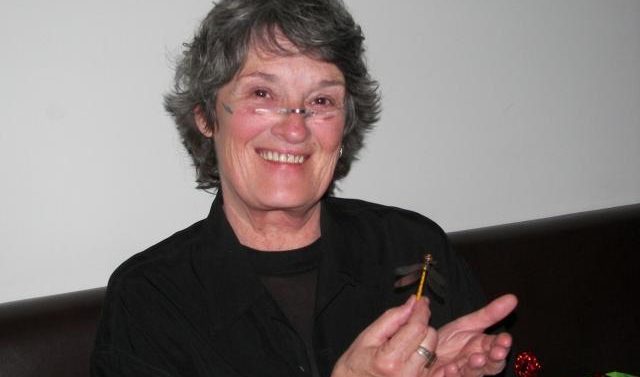 Poet Aralee Strange died Saturday at the age of 69.

After a decades-long career in New York and Cincinnati, Strange came to Athens. For the past four years, she has organized the Word of Mouth poetry readings at the Globe. C.J. Bartunek wrote about the readings for Flagpole in March.

A little after eight, Aralee Strange takes the stage to introduce this month’s Word of Mouth open-mic poetry reading. Every reader who signs up will have 10 minutes, she explains. After the break, the featured readerâ€•tonight, Steve Maurer of Philadelphiaâ€•will go, followed by more open mic. Strange, a lanky 69-year-old woman in jeans and heavy black boots, has a gravelly Alabama accent, a tiny black lightning bolt tattooed on her cheek and a warm manner that puts people immediately at ease. As founder and organizer of the series, Strange acts as host and emcee throughout the night, catching up with regulars, welcoming newcomers and introducing readers with commentary…

Word of Mouth started in December 2009, the brainchild of Strange, a poet and playwright who had moved to Athens from Cincinnati two years earlier.

“I had friends here, but didn’t know any poets. I just figured that in a town like this, there’s going to be some poets somewhere, and I thought the only way to meet them was to start a reading. So, I originally started it just to see who was out there and see if it would fly.”

Strange had been part of northern Ohio’s active poetry scene for 25 years and had organized open-mic series before, so she knew the drill. The Globe was one of the first bars she visited in Athens, and when she saw a poster of Samuel Beckett on the wall and the stage upstairs, she knew it was the place.