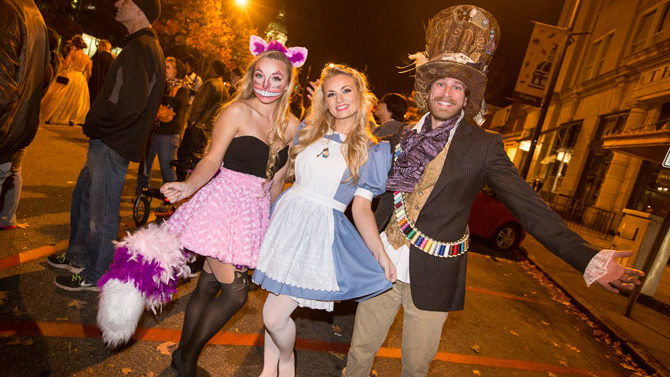 Athens’ most extravagant Halloween tradition is the Wild Rumpus Parade and Spectacle, which floods the streets of downtown with a chaotic monsoon of costumed characters. Spearheaded by musician Timi Conley, the parade has grown steadily in both attendance and scope over the past eight years. Unlike the majority of parades that require registration, this one is decidedly untamed; all that’s asked of those wishing to romp is that they arrive in disguise.

Festivities begin with the Wild Rumpus Halloween Kickoff Party on Thursday, Oct. 27 from 5–9 p.m. at Creature Comforts. In addition to performances by the Pylon Reenactment Society, Powerkompany and DJ See, a “Wild Rumpus Art Show” inside the brewery shares spooky works by local artists, including James Greer, Cindy Jerrell, Spencer Lusk, Dan Smith and more. Timi Conley’s original “Wild Thing” portrait of a girl celebrating Dia de los Muertos—which can be seen all over town through the parade’s promotional materials—anchors the exhibition inside of its gold frame.

Athens-Clarke County schools will be closed Friday, Oct. 28, making the family-friendly Monster Mash Halloween Party a perfect alternative. Held at the Foundry from 12–3 p.m., the afternoon includes mask making, face painting, crafts and a haunted house, plus trapeze performances by young aerialists from Canopy Studio and live music by students from Nuçi’s Space’s Camp Amped. Kids are encouraged to come in costume for a “Mini-Rumpus” through the venue.

Saturday, Oct. 29 is the big night. Roads will be blocked off by 8 p.m., so it’s really in your best interest to arrive early for the official parade pre-party at Live Wire Athens, which begins at 6 p.m. and features entertainment by The Taxicab Verses and The Flamethrowers. From there, you can mosey outside to line up on Hull Street near the intersection of Hancock Avenue.

The parade will step off at 8:30 p.m., following Hancock onto Pulaski Street, down Clayton Street, then swinging a left onto College Avenue for a massive dance party outside of City Hall. Harvey Funkwalker, Sunny South Blues Band, Cabbage Looper and a few other bands will be positioned along the route to put a skip in the step of marchers. An interactive video feature, designed by Adam Barfield and funded in part by a grant from the Athens Area Arts Council, will project live footage of the attendees, manipulated through software responding to movement. The official after-party opens at 10 p.m. at the Georgia Theatre with Pigs on the Wing—a Pink Floyd tribute band featuring David Murphy, formerly of STS9—and Timi and Wonderland Rangers.

Pulling off such a large production requires a lot of community support, with this year’s most generous sponsors including Creature Comforts, Allgood Lounge, Athens Downtown Development Authority, Hotel Indigo, DePalma’s, Flagpole and the Hanmer Family. In return, the parade benefits a different nonprofit each year, this time partnering the Georgia River Network, an organization that advocates for clean flowing rivers and protects them by monitoring water policy. Check wildrumpus.org or facebook.com/wildrumpusparade for updates.