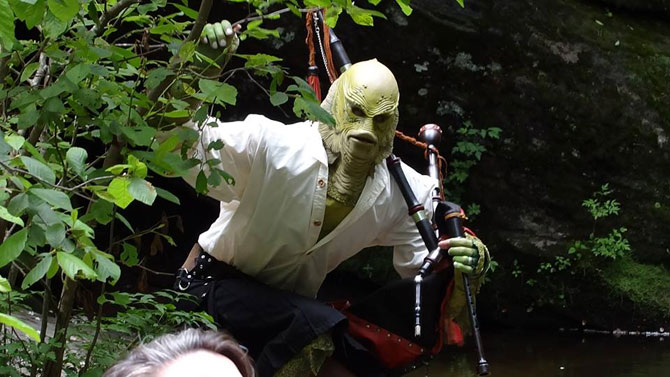 The Classic City Fringe Festival will return Thursday, Oct. 27–Sunday, Oct. 30 for its second year in Athens. The festival, organized by local artists Mux Blank and Marty Cronk, highlights underground, unexpected and experimental art and performance through a range of mediums and spaces.

“The idea of the festival is for all these different groups around town to showcase their uniqueness,” Blank says.

This year’s slate includes a burlesque tribute to Seattle’s grunge scene from Effies Club Follies’ Lucy Plenty; plays from independent playwrights, including UGA professor John Patrick Bray; and a performance of “bagpipe swamp metal” from the Kilted Creature, aka musician RJ Grady dressed as the Creature from the Black Lagoon in a kilt.

The organizers estimated the fest has around 40 acts total between main acts, supporting performers and events held under the festival’s banner but operated independently as “bring your own venue” events, which work with the festival on advertising and theme, but organize their locations and performers themselves.

Monsoon’s annual Halloween show will be one of these BYOV events, taking place at house venue La Casa De Cha Cha on Ruth Street. According to the show’s description, the performances will include gory theatrics such as a human sacrifice, and will also feature Swamp, Oak House and Dead Neighbors.

Cronk says he was inspired to start the festival from attending fringe festivals as a teenager in Orlando, FL—and from Athens’ lack of one. Cronk moved to Athens in 2006, and in 2009 he started the theater group Randomosity Productions with some friends. When one member expressed interest in producing an independent play, Cronk suggested joining a fringe fest to pool resources, but no one knew of one in town.

“I was really surprised to hear that Athens didn’t have one, because this town is probably more fringe-y than Orlando,” Cronk says.

Cronk teamed up with Blank in 2014 for the first iteration of the festival, having seen Blank’s events around town. “We had a similar vision, but coming at it from different angles,” Cronk says. “He was looking at it with fringe artists actually creating physical material, and I was looking at it from a performer’s perspective.”

Other events will include the Battery Powered Noise Fest, an experimental music show, and a vendor market at Terrapin Brewing Co. during the day, which will expand into the Moonlight Gypsy Market at Junkman’s Daughter’s Brother that night. Shows will take place at a number of venues, such as White Tiger, The World Famous and Blank’s Joker Joker Gallery.

“These are things that are more expensive when we’re alone,” Cronk says. “We can pool our resources and do something big together.”

Tickets for the full festival are $40, with Friday and Saturday day passes at $20 and a Sunday pass at $15. A full list of performers, venues and sponsors can be found at classiccityfringefestival.com.