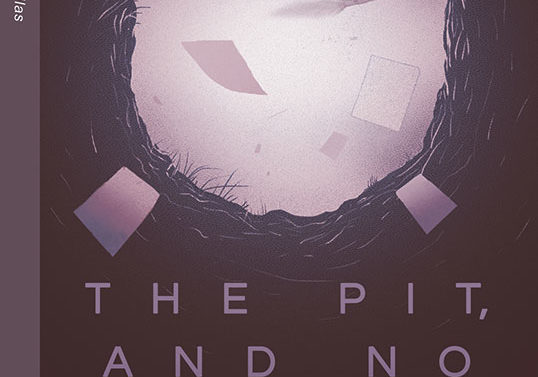 Jordan Rothacker is a doctoral student in Comparative Literature at UGA and a general man-about-town here in Athens. He has written pieces about our city’s best vegetarian sandwiches and the wonder of the Negroni slushy at Seabear for The Broad Collective and recently published an essay about his friend and mentor, the renegade American novelist William T. Vollmann, in a critical anthology from Delaware University Press.

Rothacker’s debut work of fiction, The Pit, and No Other Stories, billed as a novella by its publisher and a “micro-epic” by its author, is out now from Los Angeles’ Black Hill Press.

The issue of form is paramount to Rothacker’s The Pit.  What sort of book is this? It’s published by a press that specializes in novellas (extended fictional narratives longer than short stories but shorter than full-length novels, usually somewhere around 90 or 100 pages in length), and yet it doesn’t really operate like a conventional novella. There’s no compressed central narrative, no Aristotelian unity of time and space and no limited cast of primary characters, but instead a proliferation of stories and characters that sprawls widely in history and location.

Upon a first glance at the book’s table of not contents, but “Stories, Locations, Years,” which range from “The Woodlands, 180 BCE” to “Arizona Bay, 2121,” with stops in 19th Century Africa, post-WWII Shanghai, ‘50s Manhattan, coked-out ‘80s Hollywood, and even contemporary cyberspace and “Outside of Time” between, one might be tempted to view The Pit as an ambitious yet disjointed collection of separate stories with no connecting through line — and yet the book’s subtitle, and No Other Stories, specifically urges its readers not to view the collection that way at all.

A further subtitle included on the book’s second title page dubbing it “a micro-epic” helps clarify matters more. The Pit is like a simmered reduction of a novel that could have been much longer, a boiled-down and condensed version of an epic tale à la David Mitchell’s Cloud Atlas, in which the widely varying genres, styles, settings and narratives at play slowly reveal their connections with each other.  (For the record, I would have preferred a tighter linkage to The Pit’s primary motif in a few of its more tangential sections, including the fascinating-in-its-own-right slave narrative in miniature that comprises chapters eight and 17, but I was satisfied with the book’s overall pattern of organization.)

Precedents for arranging a book in this way can be found in the much vaster, more intimidating “systems novels” of postmodern giants like Vollmann (whose Europe Central similarly juggles times, locations, and characters) and Thomas Pynchon, whose 1963 debut novel V. I was frequently reminded of while reading The Pit. V.’s whole sick crew of sailors, spies, diplomats, priests and alligator-hunters are banded together only by the slim connective tissue of their quest for the elusive V., who might be a woman, a place, a rat, a concept, a plot device or something else entirely.

So what V. ties together the various centripetal narrative orbits of The Pit?  Well, that pit referred to in the title. The Pit in The Pit isn’t quite as hard to pin down as Pynchon’s V.; it’s an actual place, albeit a complex and strange one with a variety of insinuated powers and uses, and Rothacker’s evocation of it is his book’s greatest strength. The Pit exists about three miles northwest of a town called Pitt’sville in the Allegheny Mountains in West Virginia, and in the parts of the novella set close to the present, a council of elders preside over a weird ceremony called “Going Over,” in which the town’s new dead are ritualistically interred in the Pit’s dark reaches. A Native American character named Six-Fingers Willow Ptarmigan undergoes a tobacco-influenced shamanic initiation at the mouth of the Pit in an affecting episode in the book’s earliest chronological section, and other characters lose grandfathers, bodies, souls and sanity to the abyss.  Pitt’sville residents try in vain to escape the Pit’s pull, getting as far afield as Los Angeles and New York, but find themselves inexorably drawn back into its magnetic, almost metaphysical field. Eventually, the ambiguous Chrysalis Corporation (a close cousin to Pynchon’s Yoyodyne defense contractor in V.) discovers a mysterious fuel source apparently derived from the harvested generations of the dead in the Pit, as the later sections of the book take on more of a science-fiction edge. In the final chapter, the Pit seems to consume even the pages of The Pit itself, and all of the narratives it has encompassed before.

I have qualms about certain aspects of Rothacker’s book—its dialogue and narration can be clichéd and unconvincing, and the author’s inconsistent use of commas, especially between independent clauses, drove my inner freshman comp teacher crazy—but for a debut novella, The Pit, and No Other Stories is ambitious and compelling, especially when it blurs the lines between the speculative and the realistic.