In Its Third Year, The Force is Strong With AthCon 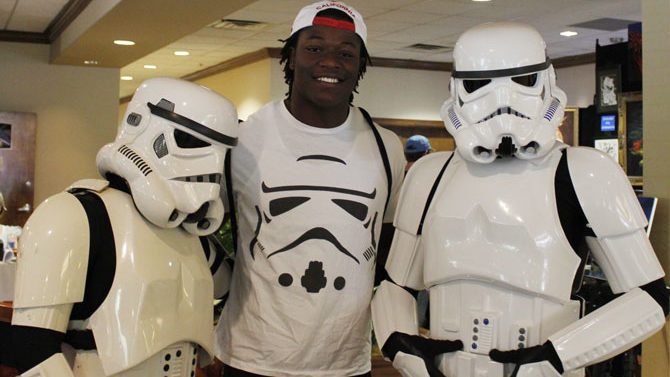 Athens gets in touch with its geeky side once again this weekend, when AthCon returns to the Classic City.

AthCon is a convention that invites cosplay (costume play) enthusiasts, comic buffs, gamers and science fiction fans of all stripes to gather together. This year, its third, AthCon will be held in the Classic Center and will span two days. In addition to the costumed revelry, the convention will feature a wide variety of attractions, including contests, vendors, panels and even a pro wrestling event.

Attendees are encouraged to dress up like their favorite comic or sci-fi character. A costume contest will award cash and other prizes to the winners of several categories. Tickets at the door are $5 off for people who are in costume—“a little bit of a nudge to get people to do something they want to do anyway,” says AthCon CEO Brett Atchley.

Conventions of this nature are nothing new. Dragon Con, held in Atlanta every September, attracts over 50,000 people. Unlike many of its counterparts, though, AthCon is a nonprofit convention that benefits the Rose of Athens Theatre. Its philanthropic nature is one of the many things that make AthCon just a little different from the rest.

So, what’s the draw? According to Atchley, AthCon simply gives people a chance to express their fandom openly without being judged for it.

“People enjoy getting outside of themselves, just like people enjoy dressing up for Halloween or costume parties,” Atchley says. “I think that it’s a nice excuse for people to be something different.”

AthCon got off to a rocky start in 2013, when the first official convention, scheduled to take place in Bishop Park, was rained out. The event has since been held indoors; in 2014, over 300 people attended. Atchley believes the number will increase to at least 700 this year.

Indeed, the 2015 edition of AthCon is marked by expansion. Besides adding another day to the convention, it will feature more attractions than ever, including panels that will discuss topics that include superheros, Star Wars, video games and anime.

We are trying to make it a little more homegrown Athens.

While AthCon is influenced by Dragon Con and similar events, and though it continues to grow, organizers say its goal is to retain some of the small-town charm that is lacking in the larger events. Plans are in the works to have local food trucks on site, and several of the souvenir vendors are based locally.

“We are trying to make it a little more homegrown Athens,” Atchley says.

This approach has already been successful in attracting fans who are put off by the bigger conventions. Melissa Blackstock, who attended AthCon last year and will be a panelist this year, appreciates AthCon’s modest size.

“I went to Dragon Con last year, and it was just too much,” she says.

Despite its relatively small footprint, putting on an event of this caliber is no easy task, says Jeremy Reaves, AthCon’s executive director. “It [starts] months in advance,” he says. “I am already in the process of planning for next year.”

The cost has increased steadily each year, too. Last year, AthCon cost about $4,000 to put on; this year, expenses are closer to $10,000. For Atchley, it is important for the convention to grow while still being small enough that people can enjoy it.

The convention’s board of directors hopes it will continue to evolve and change as fresh perspectives are brought to the table.

“As people are starting to realize that AthCon exists, they are going to start bringing their ideas, and we are open to hearing what it is that they want,” says board member Sohayl Moshtael.

Despite being a young event, AthCon has the support of several notable cosplay groups, such as the Georgia Ghostbusters and the statewide arm of the 501st Legion, a national network comprised of members who dress like Star Wars stormtroopers.

The 501st has a noticeable presence at AthCon; Star Wars-related events will dominate the weekend. Reaves, who is a member of the 501st, says the impending release of the film Star Wars: Episode VII—The Force Awakens will also ensure that Star Wars is at the forefront of this year’s convention.

AthCon’s masked ball will also be Star Wars-themed. The ball is called “The Last Night on Endor,” a reference to a fictional planet from the series. The costumed dance party will feature a performance from local progressive hip hop group Blacknerdninja.

Last year, the convention had only one vendor, but this year, it will feature a variety of booths, including those run by Watkinsville’s MR. Comic Shop and Newnan’s Full Circle Toys, which will sell vintage collector’s items.

“What your mom threw out, you can hopefully replace,” jokes Reaves.

In addition to all the panels, workshops and general costumed fun, attendees will also have the chance to see recognizable show vehicles, including a replica Batmobile and a pristine “Dukes of Hazzard” General Lee.

The next big move for AthCon is to include a costume parade, which would allow attendees to display their costumes to onlookers in downtown Athens. For now, though, AthCon is sticking to its simple mission of allowing people of all ages to immerse themselves in a world of all things nerd.

For the full lineup of AthCon events and to buy tickets, visit ath-con.com.