The What Bowl? How the Bulldogs Ended Up in Charlotte, and Why You Should Care 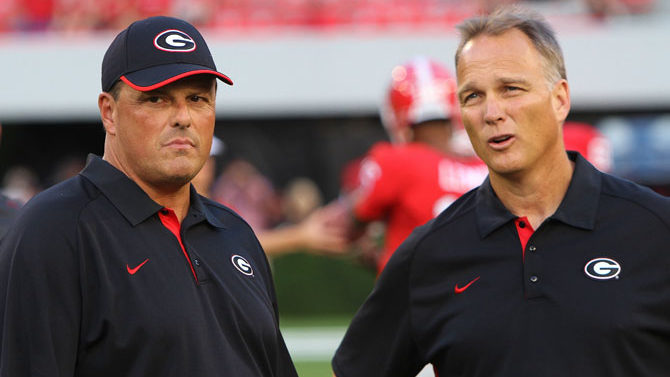 Well, at least it beats Shreveport.

Georgia fans are, to put it mildly, not too excited about playing in the Belk Bowl in Charlotte, NC. But don’t lie—a bunch of y’all are going. It’s only three hours away, after all. As we’ve done the past few seasons, Flagpole is here to irreverently answer all your (imaginary) questions about Bulldog football.

The Belk Bowl? Never heard of it.

The Belk Bowl, founded in 2002, is so young that it never even had a non-corporate name. It doesn’t really have a prestigious pedigree, with past matchups featuring such national powerhouses as Boston College versus Navy and Pittsburgh versus North Carolina. But it gained new prominence this year when the NCAA instituted a four-team playoff.

So how did Georgia end up in this Belk Bowl?

Like everything else in college football, the answer is arbitrary, arcane and complicated to the point of being incomprehensible.

Under the new playoff system, in which the top four teams face off to crown a national champion, there are six top-tier bowls and six second-tier bowls. The Rose, Sugar, Orange, Cotton, Fiesta and Peach bowls rotate hosting the two playoff semifinal games. This year, that’s the Rose and Sugar bowls.

The other four bowls get their choice of the remaining teams, but some bowls have contractual tie-ins with certain conferences, and spots are reserved for the ACC, SEC, Big 10, Big 12 and Pac-12 champions, as well as the highest-ranked team outside those Power Five conferences. Out of SEC schools, No. 1 Alabama made the playoff, No. 7 Mississippi State will play No. 12 Georgia Tech in the Orange Bowl, and No. 9 Ole Miss will play No. 6 TCU in the Peach Bowl. Obviously, all three are ranked ahead of No. 13 Georgia.

Now. Below the first-tier New Year’s bowls are six other bowls that the NCAA considers of equal prestige: the Pool of Six bowls.

“The new Pool of Six bowl process gives us the best opportunity to address several issues that impact SEC fans, including the creation of intriguing matchups, the accommodation of travel for fans and a variety of assignments to help prevent repetitive postseason destinations,” SEC Commissioner Mike Slive said in a news release announcing the conference’s selections. “We took into account the preferences expressed to us by the participating teams and had conversations with our bowl partners to create a compelling lineup of bowl games featuring SEC teams.”

The Citrus Bowl is supposed to get the best SEC team that’s not in a first-tier bowl. Ordinarily, that would be Georgia. But the Citrus is required to take the SEC title game loser at least once every six years, and opted to take No. 16 Missouri, who won the East (mostly by virtue of the SEC’s easiest schedule) in spite of being shut out by the Bulldogs.

Note that Slive mentioned “repetitive postseason destinations.” For the past two years, Georgia has traveled to Florida to play Nebraska in the postseason. UGA officials understandably didn’t want to play another boring Big 10 opponent (Minnesota) in Florida.

Next up are the Pool of Six bowls—the Outback, Taxslayer, Music City, Texas, Liberty and Belk. With its ACC tie-in, the folks who run the Belk Bowl saw a good storyline by matching up Louisville with UGA. More on that later.

Here’s another, less charitable way to look at it: Georgia played its way into this crappy bowl. They lost to a South Carolina team that would go on to finish 6–6, crapped the bed against a terrible Florida squad and couldn’t put away the Yellow Jackets at home in spite of being one kickoff through the end zone from victory. A win in any one of those three very winnable games would have, at the very least, put the Dawgs in a marquee bowl game and possibly propelled them into the conference championship game and a potential playoff berth.

So that’s why Georgia is going to the Belk Bowl, and you missed out on a Florida vacation.

TL;DR. Why should I care about Louisville, anyway?

The Belk offers some interesting storylines—which is why the powers that be chose this matchup. Louisville’s once and current coach is the villainous Bobby Petrino, who famously fled the Falcons in the middle of the season to take a job coaching Arkansas, where he was fired after a motorcycle wreck led to the revelation that he was having an affair with an assistant. He popped back up in Louisville—where he first came to prominence as head coach in the early aughts—in January, after a year in the wilderness at Western Kentucky, proving that not only are there second acts in American life, but fourth and fifth acts, too.

This is all very “Real Housewives,” but are the Cardinals any good?

Pretty good. They nearly beat defending national champs Florida State—but so did everyone else FSU played.

Dawgs fans who lived through years of “third and Grantham” will rightly wonder how he put together a stingy defense at UL, but that will only increase their giddiness when Nick Chubb shreds it for 200 yards. The star is safety Gerod Holliman, who tied an NCAA record with 14 interceptions this season.

In spite of Petrino’s reputation as an offense coach, the Cardinals aren’t much to write home about on the other side of the ball. Starting quarterback Will Gardner is out for the year with a knee injury, and freshman replacement Kyle Bolin (a Douglasville product) had a nice game against Kentucky Nov. 29, but I mean, it’s Kentucky. Brandor Radcliffe headlines a committee of running backs that’s been so-so.

If UGA quarterback Hutson Mason and Chubb, who’s been somewhat fumble-prone, take care of the ball, Georgia should take care of Louisville. And they’d better, for Richt’s sake. Athletic Director Greg McGarity recently mentioned 10 wins as his goal for the season, so Richt—who, in spite of all his success, many fans have come to believe is incapable of winning it all—could be fighting for his job.

OK, maybe I’ll go. What else is there to do in Charlotte, other than this dumb football game?

Well, if you’re into 30-minute songs and buying hallucinogens in parking lots (and who isn’t?), Athens-based Widespread Panic is playing a two-night stint at The Fillmore. Tickets for Dec. 30 are sold out, but some were still available for Dec. 31 as of press time.

If you’d like advice on bars and restaurants to check out, we’d direct you to our alt-weekly brethren at Creating Loafing Charlotte (clclt.com). Another source of information on local attractions is the Charlotte Regional Visitors Authority (charlottesgotalot.com). The NASCAR Hall of Fame sounds like a must-see.

Charlotte is a very nice, new, somewhat sanitized-feeling city that has exploded with banking money in the past couple of decades. Perhaps you can simply wander around and marvel at the lack of pee-and-stale-beer odor/scoff at the lack of character-building grit. They also have a train! The Lynx is a 10-mile light rail loop. Ride it and be jealous.

On second thought, maybe I’ll just watch it on TV.