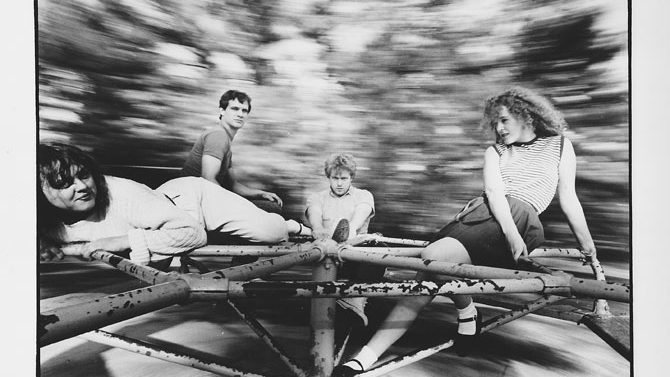 Initially, Art Rocks Athens’ banner calling was to showcase art and music, in that order. But even as it is undeniable that visual art was key to the spirit that gave rise to the famed Athens music scene between 1975-1985—or “as we think of it,” to steal a phrase from Ort—the consensus is that without the music itself, we might not be looking back at all.

The local nonprofit was conceived two years ago, but its vision comes to fruition with a series of exhibits and events this month at the Lamar Dodd School of Art, the Georgia Museum of Art, the UGA Special Collections Library, the 40 Watt Club, the Georgia Theatre and more.

Would there be this type of retrospective attention on the work coming out of Lamar Dodd at the time if the Athens music scene hadn’t risen from it?

“No,” says former Pylon bassist and current Georgia Museum of Art Public Relations Specialist Michael Lachowski. “The whole impulse, you could say, is one of trying to correct the record—or at least trying to point a finger back toward another era of rampant creativity. Initially, they were just one and the same. Then, as the music scene took off, it did become its own thing, and the ‘origin story’ wasn’t known by everybody and wasn’t part of their… experience.”

Through his role at the GMOA, and certainly given his position in the history of Athens art and music, Lachowski has been one of the most important consultants for the Art Rocks project. But the idea for the multi-faceted, many-venued retrospective first sprang from the minds of its executive committee: Maureen McLaughlin, Heli Montgomery, Blair Dorminey and Leslie Michel.

What is it, exactly, about the period in the early-to-mid 1970s that fostered Athens’ sense of imagination, which eventually worked itself into a fever pitch of nonstop creativity? Project organizers give much of the credit to Lamar Dodd faculty. At the time, there were a handful of professors actively encouraging students to break the rules, so to speak, and butting heads with the administration in the process, including art department chairman Lamar Dodd himself. 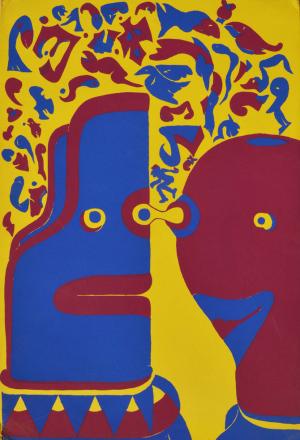 One of these professors, Robert Croker, is the curator for the Lamar Dodd exhibition “Between Rock and an Art Place.” A story that ran in The Red & Black Oct. 30, 1974 may have inadvertently reflected this attitude. When a massive fire began to gut the building housing the Athens Fish & Oyster Company, the paper reported, art students hurried to the corner of Jackson and Broad streets to sketch the scene. In the article, Croker is reported as remarking, “I didn’t ‘let my class out’ to come here. We are having class. This is better than anything we could have done in the classroom.”

Some instructors are comfortable having students sketch nature scenes and buildings in the sunny springtime. Croker, however, was enthused to have his students capture the immediacy of destruction as winter set in, to have them grab a moment by its throat because it wouldn’t ever happen exactly the same way again.

Croker left the university in 1978, just on the cusp of the Athens music explosion. His perspective is therefore unique in that his experience of this time in Athens is unmixed with the more popular—or, at least, accessible—forms into which so much creativity wound up being funneled.

“Along with Croker, there was Bob Nielsen, [Richard] “Ole” Olsen, Jerry Chappelle, Jim Herbert and Judith McWillie,” says organizer McLaughlin. “Croker was the main firing pin, although I must say that every professor had his or her own methods for firing up their classes and taking them in new directions… Judging from the amount of sketches from that day [of the fire] in the Art Rocks database, that was an important day for a lot of people.

“Nielsen had people in his class turn off the lights and draw in the dark, which is where the name for the band Art in the Dark came from,” she continues. “Herbert’s critiques could leave people in ecstasy, or running from the building in tears. McWillie was the only woman professor in the art school, and the women students especially valued her guidance and encouragement. In Olsen’s drawing class, students were expected to make a drawing seven days a week, and turn them all in for evaluation. These professors set a very high bar for their students.”

All of the above-named professors are involved in Art Rocks Athens in one way or another, and McLaughlin reports that many are represented in the Dodd exhibition.

In addition to commemorating and celebrating the era in question, the organizers of Art Rocks Athens say they are thinking in terms of historic preservation, too. 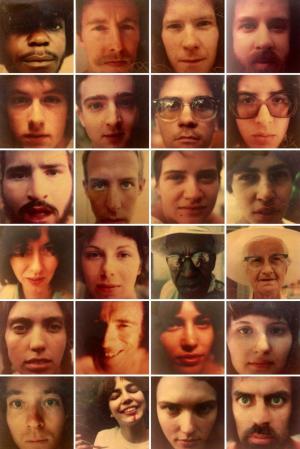 scene] was kind of a self-sustaining thing,” says Chris Rasmussen, curator of the Athens music exhibit at the Special Collections Library. “The idea is not just to celebrate this period but [also] sort of document what [was] going on. As we see more and more people are passing or losing their memory, let’s try to collect some of those.”

The stories and remembrances of such a large group—at last count, there were over 50 people involved in Art Rocks Athens at various levels—nearly 40 years removed from the subject at hand and spread out over so many events, are impossible to distill into one neat summary. Indeed, it seems the only real way to truly feel what’s going on with Art Rocks Athens is to do what the scene has always required for those who seek the way-out way of living: get out there and engage it.

• “Between Rock and an Art Place” opens Friday, May 23 at 7 p.m., and the celebration continues into the night at the 40 Watt Club. That night’s show will feature The B-53’s (a B-52’s tribute band), a special reunion by obscure rockers Is/Ought Gap, Vanessa Hay of Pylon, Michael Guthrie and Kevin Dunn.

• The GMOA exhibit “Shapes That Talk to Me” will be open 10 a.m.–4 p.m. Saturday, May 24. That evening, the Clear the Floor dance retrospective will happen at the UGA New Dance Theatre, with a reception at 6:30 p.m. and a curtain time of 7 p.m. Live music continues Saturday at the Georgia Theatre with performances by Ola Moon (featuring Cindy Wilson and Dana Downs), Oh-OK, The Squalls, David Barbe and Armistead “Army” Wellford & Friends.

All Art Rocks events, save the shows at 40 Watt and Georgia Theatre, are free and open to the public. Tickets for the concerts are available at each venue the nights of the performances. For the full schedule, see the Flagpole Calendar or visit artrocksathens.com.