‘Picturing the Black Fantastic’ and More at the Lyndon House 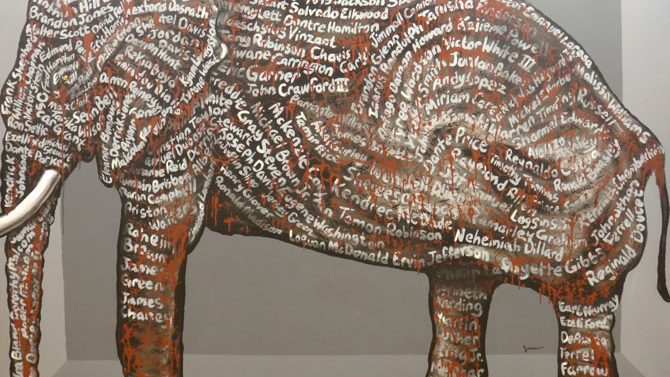 The Lyndon House Arts Center has an all-new lineup of five exhibitions, which it will celebrate with a reception on Thursday, Sept. 13 from 6–8 p.m. When seeking submissions for “Picturing the Black Fantastic,” guest curator Drék Davis invited artists to envision works that embody the complex identities and narratives of African Americans. Acknowledging the past while rooted in representational imagery, the exhibition also allows space for the myriad of imagined realities the future may hold. Here, identity straddles both ancestral and futuristic planes, existing simultaneously as magical and very real.

In order to freely construct idealized identities, it becomes more than necessary to dismantle stereotypes and confront institutional racism. Memphis-based artist Lester Julian Merriweather takes on the fashion and lifestyle industries by collaging appendages of white ad models into monsters that must be braced against, placing a critical eye on any media that implies standards of white beauty or racial superiority. Vitus Shell’s portraits attempt to bridge the gap between current and former generations by placing confident, cool young people on top of backgrounds collaged from old, problematic newspaper advertisements and illustrations.

Several pieces look to the past, like Wilma’s photographs of slave graves and Jessica Scott-Felder’s pair of “Lit Muse” light boxes containing illuminated artifacts, while others focus on the present, like Shanequa Gay’s modern take on Michelangelo’s classic Pietà. Donté Hayes’ prints include fun pop cultural references such as the Death Star atop a comb and a meeting between a man and E.T. “Bass of a Nation,” his portrait of a girl with speakers attached to her head, similarly touches on music and media’s role in shaping black culture.

Several pieces by Davis can also be found in “Present & Accounted For,” a group exhibition showcasing works by original members of the US Artist Collective, an organization dedicated to promoting the visibility of artists underrepresented at the Lamar Dodd School of Art. The group formed 20 years after Darlene Killian became the first African-American student to graduate with an art degree from UGA in 1968. She was one of the first two black students admitted to graduate studies at UGA, and after obtaining a master’s in art history, served as an art teacher in the Atlanta Public School system for 35 years.

Collectively, the members use their artwork as an opportunity to initiate conversations on sociocultural concerns around otherness, identity, race, gender, sexuality, safety and agency. Both the historic legacies of discrimination and the modern-day political climate are confronted, resulting in emotive works that challenge viewers to consider their own roles in either perpetuating or reducing inequalities in society.

Davis is drawn to mixed-media collage as well as hip hop’s influence in shaping culture, the intersection of which is demonstrated on Flagpole’s cover this week—part of an American flag triptych that shows black silhouettes of faces adorned with gold crowns, likely a reference to Biggie Smalls. Atlanta painter and muralist Janssen Robinson memorializes dozens of victims of police brutality in “The Oxpecker,” a ginormous elephant painting that can’t be ignored. Chase Campbell shares mixed media assemblages selected from the “Message From the Ancestors” series that are rich in symbolism. The show also includes works by Jerushia Graham, Atiba Wade and Frank Lee White.

Commemorating the centennial of the end of World War I, “John Cleaveland’s WWI Landscapes” offer current-day views of historical battle sites. The Farmington artist traveled to France three times over a three-year period, photographing locations that caught his eye to bring back to his studio and render as oil paintings. With the exception of one monument dedicated to the 42nd Infantry Division, which fought at the Croix Rouge Farm in 1918, the majority of scenes depict rolling hills and lush countryside, exemplifying how the land has returned to tranquility over the past century.

Like many of Cleaveland’s paintings, the photorealistic scenes contemplate the delicateness of light, resilience of nature and passage of time. In addition to a 3Thurs Gallery Talk with Cleaveland on Thursday, Oct. 18 at 6 p.m., the Lyndon House will host a hands-on activity inspired by red poppies, which were introduced as a symbol of remembrance during WWI by Athenian Moina Michael, on Saturday, Oct. 20 from 1–4 p.m.

Lisa Freeman’s solo exhibition, “So It Goes,” picks up where Cleaveland’s inspiration leaves off, jumping ahead two decades with imagery referencing World War II. The initial idea for this body of work took root several years ago after reading Kurt Vonnegut’s Slaughterhouse-Five, a novel that left Freeman with the visceral revelation of how prevalent wartime atrocities are, and how often innocent children are left most vulnerable in the wake of national crisis.

Freeman’s six portraits depict children who, despite their small statures, wear exhausted expressions with sunken eyes, as if aged prematurely by hardship. Demonstrating Freeman’s multimedia inclinations, each of the paintings is paired with a three-dimensional assemblage reinterpreting the portrait using small-scale clay figures, found objects and collage.

For even more war-themed miniatures, take a look at the new lobby display presented by the Collections From Our Community series. A selection of toy soldiers from the collection of Tony Turner includes figures representing the Napoleonic Wars, the Civil War, World War II and the Vietnam War.

On view in the Lounge Gallery, a space dedicated to quarterly solo exhibitions of wall-bound works by emerging artists, “The End of a Perfect Day” shares a series of Shawn Campbell’s photographs that are perfectly timed for football season. Currently an MFA candidate at Lamar Dodd who holds a BFA from the University of Akron, Campbell investigates the interactions, customs and values of people who cross paths through shared experiences, despite different backgrounds. For this body of work, Campbell acted as both an observer and participant while documenting familiar scenes from UGA tailgates.