Back to the Galleries: Top Exhibitions Coming This Fall 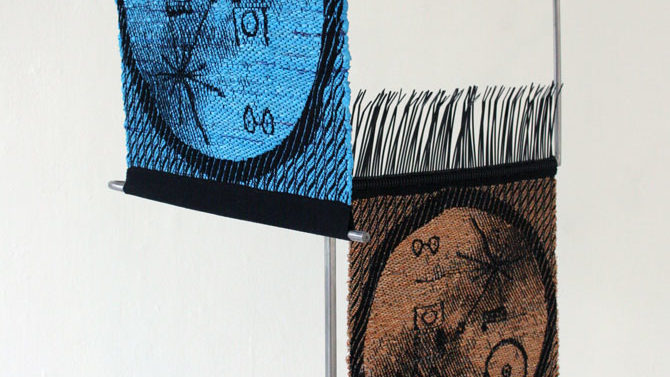 ATHICA: The first opportunity to scope out the new location of the Athens Institute for Contemporary Art, which has officially relocated from the Chase Park warehouses to the historic Leathers Building at 675 Pulaski St., will be during the opening reception for “The Golden Record: Far Beyond Our Galaxy” on Aug. 18 from 6–9 p.m. The exhibition takes its concept from the Golden Records, gold-plated copper disks containing compilations of 103 sounds and 115 images from Earth that have been traveling through space aboard NASA’s Voyager vessels for the past four decades. Led by Carl Sagan, a committee selected an array of our planet’s strange details—songbirds, laughter, human anatomy, landscapes, an hourlong recording of brain waves, “Johnny B. Goode” by Chuck Berry—in hopes that they may one day be discovered by extraterrestrial life.

The exhibition includes work not limited to sound, video, found materials and interactive media. A total of 13 artists were selected for the way their artwork contemplates and responds to the purpose and relevance of the records.

“The Golden Record” will remain on view through Oct. 7, and will be followed by an annual juried exhibition that opens Nov. 3. The gallery’s new hours are Wednesday through Friday and Sunday from 4–6 p.m. and Saturday from 12–6 p.m.

GEORGIA MUSEUM OF ART: The museum’s two main shows currently on view are “Central to Their Lives: Southern Women Artists in the Johnson Collection” (through Sept. 23), which examines the achievements of women facing challenges as social, cultural and political roles shifted between the 1890s–1960s, and “One Heart, One Way: The Journey of a Princely Art Collection” (through Jan. 6), an array of fine and decorative arts owned by the Belosselsky-Belozersky family of Russian princes dating from 1660–1952.

Opening this Saturday, Aug. 18, “For Home and Country: World War I Posters from the Blum Collection” (through Nov. 11) demonstrates the various ways the U.S., Great Britain, France, Germany, Russia, Greece and Italy disseminated well-designed propaganda posters as a tactic for encouraging citizens to enlist, buy bonds and support military campaigns. The following weekend, on Aug. 25, “Vernacular Modernism: The Photography of Doris Ulmann” (through Nov. 18) will open, with approximately 100 photographs reflecting the artist’s interest in rural craftsmen and women of Appalachia, as well as the African-American and Gullah communities of coastal South Carolina and Georgia. Later this fall, on Oct. 20, “Richard Hunt: Synthesis” (through Feb. 3) will delve into the formative stages in the career of the influential American sculptor, who created over 130 public commissions across 24 states.

DODD GALLERIES: After a summer hiatus, the Lamar Dodd School of Art is getting back into the swing of things with a new slate of exhibitions. In “Music Videos” (through Aug. 30), recent MFA graduate Stephanie Sutton uses reflective surfaces as surrogates for human companionship, toying with ideas of connection and isolation. Opening later this week, “Ash Heap/Landfill” (Aug. 20–Nov. 8) presents a site-specific landslide of unfired clay and the “ceramic trash” of Marie Lorenz, a New York-based artist who has spent over a decade traveling to various urban waterways to collect and visually respond to tidal debris.

LYNDON HOUSE ARTS CENTER: Three new exhibitions will open on Aug. 25. Local artist Lisa Freeman’s solo exhibition “So It Goes” (through Oct. 8) will showcase a collection of paintings, as well as three-dimensional assemblage scenes utilizing small-scale clay figures. Guest curator Drék Davis envisions “Picturing the Black Fantastic” (through Oct. 13) as an exhibition contemplating blackness as an image both “ancestral and futuristic,” acknowledging the past while making space for complicated notions of narrative and identity. “Present & Accounted For: 1968–2018” (through Oct. 13) presents works by members of the U.S. Artist Collective, which was established in honor of Darlene Killian, who became the first African-American student to graduate with an art degree from UGA in 1968. Collectively, the exhibition addresses “‘otherness,’ race, sexuality, gender, safety, access and agency,” with works by J Chase Campbell, Rodrecas Davis, David Gresham, Jerushia Graham, Sara O’Brien, Janssen Robinson and Atiba Wade.

On Sept. 8, the center’s Lounge Gallery will present Shawn Campbell’s “The End of a Perfect Day,” a body of photography shot at tailgating events during UGA football games. Campbell’s show will replace Sean Dunn’s current exhibition of photographs from India. The following week, on Sept. 11, “John Cleaveland’s WWI Landscapes” (through Nov. 9) will commemorate the 100-year anniversary of the end of the war through a series of oil paintings depicting current-day French landscapes of former battle sites.

The full fall lineup will be celebrated with a reception on Sept. 13 from 6–8 p.m. Make sure to also save the date for Nov. 8, when “St. EOM of Pasaquan” (through Jan. 19) will reveal a collection of paintings, sculptures, garments and other artifacts created by Eddie Owens Martin of Pasaquan, a visionary art environment located in Buena Vista and recently restored by the Kohler Foundation.