‘In These Streets’ at Trio Brings Street Artists Indoors

Whether its spray painted graffiti, wheat pasted posters or origami swans tied to a tree, street art injects bursts of vibrancy into public spheres. Currently on view at Trio Contemporary Art Gallery through Saturday, Feb. 24, “In These Streets” presents a dozen artists and collectives whose murals beautify and enrich communities all across North Georgia. Though the nature of street art dictates that it appears primarily in outdoor environments, these murals are painted onto 9-by-12-foot canvases and hung floor to ceiling, which provides a fair solution for how to preserve the pieces after the exhibition’s duration.

“In These Streets” was guest curated by Athulhu and Saint Blondie along with gallery director Tatiana Veneruso. For well over two years, Athulhu has been participating in free art drops around Athens and Atlanta, echoing the exhibition’s emphasis on promoting the importance of publicly-accessible artwork in nontraditional locations. Small, palm-sized renderings of the Athulhu character, his cartoonish version of H.P. Lovecraft’s Cthulhu, are typically painted with a particular theme that correlates with the locations of where they are hidden. Photographs are then posted as clues on the Instagram account @athulhu for followers to race out and snatch up.

Dozens of other artists have joined in on this street art scavenger hunt, frequently circulating their pieces on Free Art Fridays using the hashtags #FAFATH and #FAFATL. CisneArts, who distributes small swans for fun, incorporates a pair of her favorite bird into “Daydreamers,” her mural depicting a woman and girl swinging side-by-side above a canopy of clouds. sQuishiepuss, whose murals and woodcuts always star a pink, bug-eyed French bulldog, has also been known to hide the occasional mini pup.

This global free-art movement encourages artists to stay active for the pure love of creating art, without the distraction of catering to a specific audience or the pressure of attempting to sell the work. Lucky passersby who pay attention within their environment are rewarded, and hopefully walk away with a sense of surprise, wonder and reconnection to their surroundings.

“There are so many reasons to love street art: its DIY attitude, its outlaw roots, the fact that it’s out there for everyone to engage with,” says Athulhu. “But, for me, what I love the most about street art is its ability to redefine someone’s relationship with the urban environment around them. We live in cities, surrounded by landscapes that are largely static, sterile, even monotonous. It’s easy for a person to just tune out and disengage. A good piece of street art, especially when it sneaks up on you, can snap you out of that fugue in an instant and reengage you with the world around you.”

Gracing the cover of Flagpole this week, 70dot’s vibrant mural “Street Cats for Peace” includes a handful of mischievous felines baring tattoos, throwing peace signs and balancing spray-paint cans on their heads in front of a brick wall detailed with messages like “the smallest feline is a masterpiece” and “long ago cats were worshipped—they never forgot.” Though Donna Howells, the “Old Lady Warrior” and self-proclaimed cat lady behind the mural, began painting at an early age, it wasn’t until she turned 70 years old that she began creating street art and adopted the moniker 70dot. Now 72, her murals can be found all over Atlanta in the Krog Street Tunnel, Little Five Points and her Cabbagetown neighborhood. 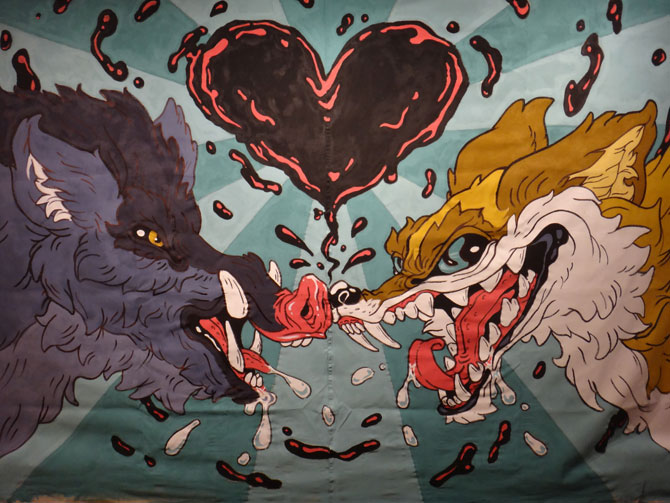 “Besides the inherent, aesthetic value of public art, I think street art can rekindle interest in or reclaim an area that has been overlooked or forgotten” says Athulhu. “A colorful mural gets attention. It can turn a business into a destination. Those people who get out of their car for a closer look at the mural on the side of your building? They’re far more likely to drop in for a look around. If nothing else, they’ll probably tag you on social media when they take their selfies.”

Several of the exhibition’s artists belong to the Lotus Eaters Club, an Atlanta-based collective of designers, animators and programmers seeking to combine physical pieces of artwork with a digital platform. Co-founder and illustrator Killamari joins Doitdoitleage for two complementary murals whose recurring characters—Killamari’s pink, tentacle-horned skull dude and Doitdoitleague’s Cthulhu Brown—high-five each other to celebrate the spirit of collaboration. Power couple Chris Alvarez and Courtney Hicks combine their talents under the moniker FoxySwine, and their mural “Tamed Beasts” shows their spirit animals snarling and salivating nose-to-nose under a giant heart. Pam Peacock’s “Everything/Nothing” draws from her interest in science fiction and space exploration.

Similar only in their size, all of the murals vary greatly in style and theme. Ashley Anderson’s mural, “an absurd exercise in realizing a shower idea on a grand scale,” mashes up a Sunday morning comic with a violent anime classic for “Hokuto No Garfield 5,” introducing Kenshirofield and his love interest, Yuriasagna. A.L. Ashbaugh paints a great horned owl appearing extra wise with a third eye, and Cold Tony’s “Eagle Omen” was inspired after experiencing a sense of protection from seeing an eagle fly overhead his new home after his previous house was destroyed by Hurricane Irma. Dianna Settles’ portrait of a woman with a fruit bowl offers some sage advice, while oofster encourages viewers to “live stoked” through a portrait of an excited woman surrounded by stars.

“I think Athens still has this tendency to want to limit street art to these designated, controlled spaces where art is safe and okay. I think the next step will be relaxing these restrictions a little. Let street art color outside the lines a little. Let it be more daring, more organic, and better integrated into the urban landscape as a whole,” says Athulhu.

“This goes for public and abandoned spaces, too. I think they serve important roles as incubators where artists can experiment and hone their skills. The Krog Tunnel in Atlanta is a perfect example of a public place that has become a beloved landmark entirely because of its street art. People come to the neighborhood from all over just to see it!”

“In These Streets” is Trio’s first of many exciting group exhibitions that have been announced for 2018, all of which are currently accepting proposals for entries. In March, “Trifecta” will showcase MFA students attending Georgia State University, Georgia Southern University and the University of Georgia, and the following month “Media Circus” will harrow in on artwork using mixed media and non-traditional materials. June and July will be dedicated to CatFest—a self-explanatory “tribute to our fierce, fabulous, feline friends”—as well as the first annual “Young Artist Exhibition” of creations by students in grades PreK-12. The gallery will then look to the past through homages to the year “1996!” and close the season out by exploring new intersections of art and technology through “AT – 0.”

Trio also recently announced the launch of a new membership program, a popular way for galleries to bring in monetary support from the community while fostering a sense of inclusivity. Student memberships ($20) include the waiving of suggested donations at events and an invitation to an annual members’ event, while individual memberships ($50) add an Athens Art Print from Pixel & Ink’s pool of high-quality prints by local artists. Group memberships ($200) receive three prints, a mystery art gift box and acknowledgement as a sponsor on all exhibitions for the year. Visit trioathens.com for details on submitting works to upcoming exhibitions and becoming a gallery member.