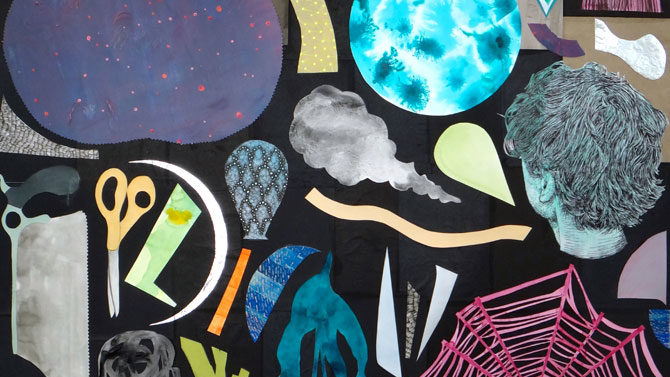 Capable of establishing entire new worlds, artwork offers insight into the inner workings of the mind as artists visually express their dreams and fantasies. On view for its final week at the Gallery@Hotel Indigo, “Magical Mystery Tour” presents a collection of eye-catching pieces intended to inspire the imagination. Visitors can observe and interpret the works in person until this Saturday, Jan. 13, when the group exhibition featuring six Georgia artists comes down.

Reflecting the fascinating mental activities that occur during the acts of resting and sleeping, Brian Hitselberger’s complementary “Daydream” and “Nightmare” aim to visually exemplify the unpredictable associations that happen within dream sequences. Miscellaneous components like hands, scissors, the silhouette of flowers, a spider web, water droplets and a button-down shirt are arranged in a way that allows for the eye to bounce around and try to create its own narrative. Interestingly, Hitselberger draws portraits of figures from behind, an approach that allows him to incorporate specific individuals with a level of anonymity that won’t distract the viewer.

“These figures become an opportunity to render not necessarily a person so much as a person in thought,” says Hitselberger. “All of my work is in some way related to an interior life, and by turning my figures around, I feel like I can allude to what’s inside them through an outside rendering. What I’m thinking about in my work, and what I want the viewer to be thinking about in my work, is the nature of our own mental and interior life. The good, the bad and deeply strange.”

Primarily an installation artist, Dana Haugaard creates environments that physically engage visitors, often through the use of low-frequency sounds that can affect the body depending on movement and spatial positioning. For “Magical Mystery Tour,” he contributes unusual, curved mirrors painted with concentric circle patterns inspired by these sound waves. The mirrors insert viewers directly into the pieces, visually warping the space and enhancing the interactivity of the artwork.

“The viewer is intended to be the primary aspect of the work,” says Haugaard. “These are an attempt to provide a moment where they can see themselves in a place that is not entirely what they expected—warped, distorted environments with layers and fields of color creating visual frequencies that are augmenting the experience—and then hopefully reflect on how they exist within that space.”

The cast urethane resin sculptures of ice-cream cones by Jourdan Joly will excite anyone with a sweet tooth, attracting eyes with their saccharine simplicity and eliciting responses of surprise and wonder at their textural precision. Balanced on sugar cones or waffle cones, gravity-defying scoops are stacked near-impossibly high into sweet towers with fun color gradients. Appearing as though they were frozen mid-melt, the sculptures feel simultaneously playful and deceiving when one is finally able to accept their artificial nature. 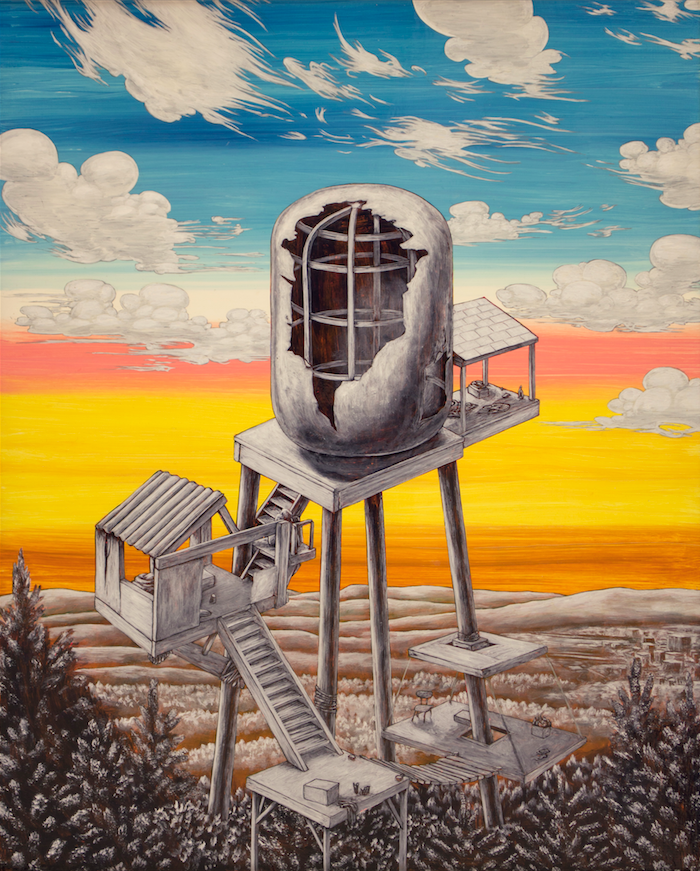 Several of the artists participating in “Magical Mystery Tour” take visitors to lands of the imagination. Influenced by Northern Renaissance painting, video-game landscape design and childhood memories of western Pennsylvania, Orion Wertz creates oil paintings with surreal flourishes and an underlying dystopian vibe. Use of color plays an interesting role, contrasting atmospheric space rendered in intense, saturated tones with cold, black-and-white objects in the foreground. Man-made structures of ambiguous function in seemingly unpopulated areas appear to crack and crumble along the edges.

“I imagine a world in which the inhabitants only exist to entertain a being that they have never encountered,” says Wertz. “In this world, no one ages or reproduces, needs are satiated, goals are impossible. The world exists in an arrested state of decay, exhibiting an apocalyptic affectation that grants permission for everything. This world awaits the ‘Unknown Player.’”

Illustrator Jacob Wenzka offers a glimpse into another imagined world, sharing prints that appear as pages in a new local children’s book called The Girl Who Kept Night in Her Closet. Written by Bart King, the story tells of a young girl who has a mysterious relationship with the natural world. Set in what appears to be a warm Southern landscape—indicated by a traditional-looking barn and the Spanish moss that hangs along the frame’s canopy—the tale incorporates flourishes of magic realism to explain how day turns to night. The scenes are rendered completely in grayscale, with the exception of glowing yellow fireflies and powder blue stars.

Jaime Bull materializes celestial inspiration into her pieces, which vary greatly in style from one to the next. Her largest, the 4-by-4-foot “Space Stool,” is a black-and-white striped structure resting on three legs. A glittering, collaged Saturn-esque emblem of holographic material adds a kitschy and childlike playfulness to the piece. Her acrylic and ink drawing “Rocket Chair” presents a similar structure with busy geometric details, while two photographic works collage stones and lichens into alien landscapes.