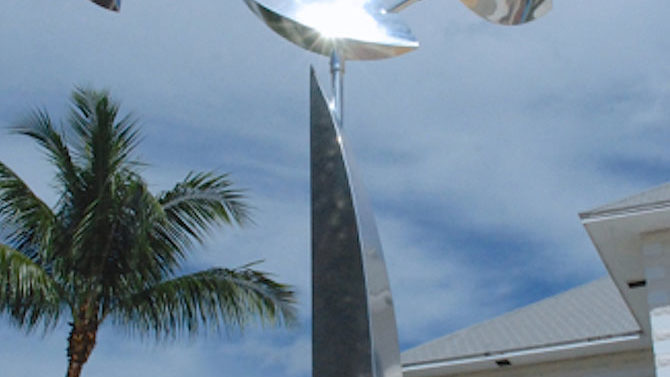 Harnessing the power of wind, New Orleans-based artist Lin Emery is both inspired by and dependent on the natural world to fuel her kinetic sculptures. Currently on view in the Georgia Museum of Art’s outdoor Jane and Harry Willson Sculpture Garden, a space devoted to the works of women sculptors, Emery’s towering creations gracefully twist and turn with each passing breeze.

Emery works primarily in either polished or brushed aluminum, a material that nods to her port-city home. Though her chosen material has a historically industrial purpose, the smooth, mirror-like quality of the metal allows each sculpture to exquisitely blend into its environment. As each spinning shape reflects its surroundings, the sculpture becomes a swirling collection of slightly warped branches and clouds.

Many of her works are influenced by natural forms as well as music and dance, in both the shape of their silhouettes and the fluidity of their motions. “Umbrella Tree,” “Lyric” and “Octet” each support arms of moving shapes branching off of sturdy metallic trunks. Rising from the ground like Seussian trees or bizarre topiaries, the figures establish a fantastical space. “Splay,” a smaller and much more angular work, stands out from the bunch with a shape resembling an origami swan.

Born in New York City in 1928, Emery moved frequently throughout her adolescence and attended five different universities. While at the Sorbonne in Paris, she studied under famed Russian sculptor Ossip Zadkine, an experience that solidified her lifelong passion for sculpture. After settling down in New Orleans years later, her work shifted from figurative works to forms abstracted from nature, and she began to experiment with different methods of creating motion. She began with water-propelled “aquamobiles,” moved on to systems made of magnets and finally flowed toward wind-driven works.

Curated by the museum’s deputy director, Annelies Mondi, “Driving Forces: Sculpture by Lin Emery” will remain on view through Sunday, Apr. 2. In addition to the four large works in the garden, five smaller sculptures are on view in the Alonzo and Vallye Dudley Gallery.

The exhibition’s photographic selections offer glimpses at cultures across the world. Independent photojournalist Kael Alford contributes images from the “Eye Level in Iraq” series, which was taken not long after the U.S. invaded Iraq in 2003. The portrait of women mourning the loss of family members killed by a missile stands in contrast to a portrait of women on their way to a celebratory henna party. Carl Bower’s two photographs from the “Chica Barbie” collection capture the glitz of Colombian beauty pageants in the late 1990s. 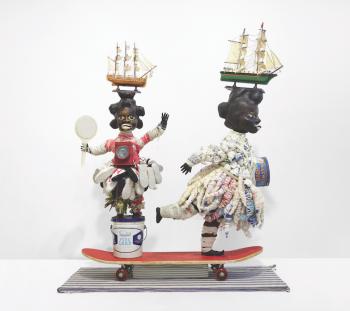 Standing near the center of the floor, Vanessa German’s mixed-media sculpture “2 ships passing in the night, or i take my soul with me everywhere i go, thank you” commands attention right away. Two black female figures covered in porcelain doll parts balance decorative ship models on their heads, while one holds up a mirror and the other steers her red skateboard. German’s list of materials is worth noting; among the rhinestones, cloth and coffee tins are heavy mental inputs like “slavery on an everyday basis as made real and present by the reality of white supremacy” and “the journey from rage to understanding, the journey from compassion for everyone else to compassion for myself.” The assemblage works well near Patti Warashina’s earthenware sculpture, “Hot Head,” a devilish horned face with a curious expression.

Exemplifying The Georgia Review’s relationships with members of the local community, Athens artists Nina Barnes and Margaret Morrison are also included in the exhibition. Barnes, who relocated here from Norway in 2002 and is well known for her visual contributions to the band of Montreal, has an incredibly distinct style. “Bugscape” demonstrates her ability to create fantasy worlds through a process of collaging and digitally manipulating layers of images made with watercolor, colored pencil and acrylic paint. Morrison, a professor of drawing and painting at UGA’s Lamar Dodd School of Art, contributes “Flying in Formation,” a giant triptych exploring experimentations with flight. 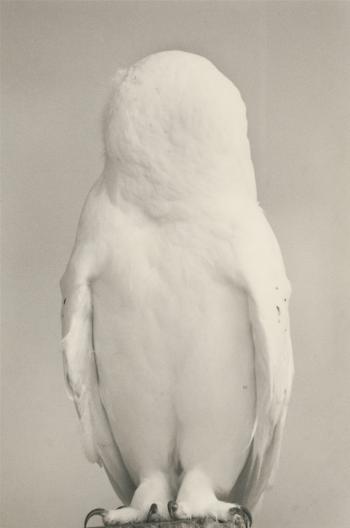 “Storytelling” also includes diverse works by Benny Andrews, Tamas Dezso, Daniel Mirer, Celeste Rapone, Bianca Stone, Kara Walker and Masao Yamamoto. Currently on view at the museum through Sunday, Jan. 29, the exhibition was co-curated by Jenny Gropp and Annette Hatton, The Georgia Review’s current and former managing editors, respectively. A closing reception for “Storytelling” will be held on Thursday, Jan. 19 from 7–9 p.m. Sponsored in part by the National Endowment for the Arts, the evening will include a reading by award-winning poet Jericho Brown.

There’s a lot to look forward to next year at the museum, with four new exhibitions opening in January alone. “Advanced and Irascible: Abstract Expressionism from the Collection of Jeanne and Carroll Berry” presents works by “The Irascibles”—a group of 18 artists including Willem de Kooning, Jackson Pollock, Mark Rothko and Hedda Sterne—who earned their nickname after sending an open letter to the Metropolitan Museum of Art in protest of its juried “American Painting Today: 1950,” which they perceived as closed-minded towards “advanced” artwork. Focusing primarily on abstract works created in the 1950s and ’60s, “Artists of the New York School” will offer paintings, sculptures and works on paper by artists including Louise Nevelson, Helen Frankenthaler, Frank Stella and Philip Guston.

“To Spin a Yarn: Distaffs, Folk Art and Material Culture” will showcase 40 decorated distaffs collected from around the world, and will highlight how these spindles used to hold wool and other fibers have been used to symbolize traditional domestic work of women throughout history. Finally, “Expanding Tradition: Selections from the Larry D. and Brenda A. Thompson Collection,” selected from 100 works donated to the museum in 2012, will include 50 pieces by African-American artists including Amalia Amaki, Kara Walker, Benny Andrews and Elizabeth Catlett.