The Warm Fuzzies of Dog Walking 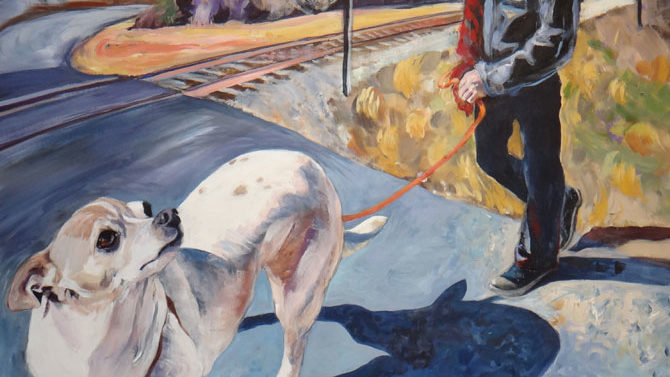 GOOD DOGS: Jennifer Hartley’s new series of paintings, “All Walks,” currently on view at Ciné through Monday, Jan. 18, alternates between large and small portraits of people strolling through neighborhoods with their tail-wagging canine companions leading the way. Her portraits not only convey the strong universal bond between man and his best friend, but serve as a personal opportunity for her to reach out and make deeper connections with the unique characters and iconic places comprising her community.

“For quite some time, I’ve been making paintings about the people, streets and houses of my neighborhood,” says Hartley. “More recently, I began making paintings of people walking their dogs. I feel these paintings are as much about place and time as the characters and dogs that populate them.”

After spotting a person who is both visually compelling and seems at ease within their surroundings, Hartley approaches the potential model about participating. The artist accompanies them on their walk, shooting photographs along the way, then returns to her studio to piece together a composition that reflects the story.

“During a residency in Vermont, I continued the series, extending beyond my neighborhood,” says Hartley. “I began approaching local dog-walkers the day I arrived. I found that this was a wonderful way to immerse myself into a community. People with dogs are easy to approach. They feel safe and are comfortable talking about their animals. I got to know the local residents very quickly.”

One of the paintings created during the residency is on view at Ciné, and another can be found within the 2016 calendar compiled by the Athens Institute of Contemporary Art. Hartley, who has lived in Athens for more than 20 years and received an MFA from UGA with an emphasis in painting and drawing, also continued the series while teaching in Cortona, Italy this spring.

Often, unusual proportions in her works exaggerate facial expressions or draw attention to certain details within the scene. In her portrait of Boulevard resident Julien de Rocher walking his chihuahua along the train tracks near the Chase Park Warehouses on Tracy Street, Hartley emphasizes the relationship dynamic between the two by making the dog larger than life.

“The painting [of de Rocher] with the crazy scale came out of the the observation that the chihuahua’s owner held that little dog in such high regard,” says Hartley. “It was very sweet to witness. I’m not sure I captured the reverence he has for that dog, but that was the idea.”

BLACK LIGHTS: Michael Lachowski, immortalized in Athens rock history as the bassist of Pylon, is also a well-established photographer and multimedia artist, spearheading countless projects over the years, like publishing Young, Foxy & Free magazine and taking portraits at events under the moniker Foto Pixx.

His new exhibition, “I’m in the Band,” focuses specifically on the experience of being a musician—performing and attending live shows, and specific songs recorded by Pylon. Partially illuminated by black lights, flourishes of fluorescent pink pop brightly within the high-contrast, black-and-gray graphite and chalk drawings on white paper.

“Last Night’s Wristband” reflects all the mornings spent ripping off wristbands from the previous night’s concert, while “40W Bulb”—memorializing 40 Watt Club co-founder Paul Scales across the light bulb’s glass—recognizes the special spot where so many of the Classic City’s legendary shows took place. Naturally, several drawings of literal pylon cones are also included.

“I’m in the Band” is currently on view at the World Famous through Sunday, Jan. 10. A closing reception with the artist will be held Thursday, Jan. 7 from 7–9 p.m. Lachowski plans to present a live performance of the unaccompanied bass lines to two Pylon songs, “Cool” and “Dub,” which double as the subjects for multiple pieces in the show.

DECORATING DOWNTOWN: A pat on the back goes to local artist Heidi Hensley, who has been selected by the Athens Downtown Development Authority to design four new banners to be hung on posts downtown. The banner replacement project, which has a $2,500 budget for public art, received a total of six entries. All contestants were displayed anonymously and voted on by members of the ADDA, Chamber of Commerce, Athens Area Arts Council and other invited community groups using a rubric and rating system.

Hensley is no stranger to having her artwork around town; last month, her paintings on canvas and wood filled the front window of Frontier, and this month, a collection is on view at Last Resort Grill. Typically employing loose brushstrokes and the occasional paint splatter, her body of work most often centers around iconic images of bulldogs, football and downtown scenes, making her an appropriate fit for the project.

Though previous banners have been rotated with each new season, Hensley’s four complimentary designs, which are inspired by popular downtown activities like eating and shopping, will likely hang together year-round, vote pending. The ADDA plans to install the replacement banners around the end of February.