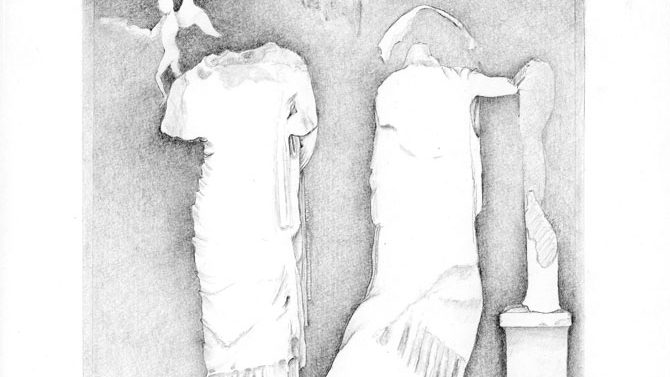 Ancient History: Images from the Parthenon—the treasured temple on the Athenian Acropolis dedicated to the goddess Athena—permeate our collective memory and inform both popular culture and scholarly literature. Though the temple was once one of the most incredibly adorned in the ancient Greek world, the majority of its gods and heroes were deliberately damaged by the hands of Christians in an anti-pagan movement during the 6th Century. Its metopes—the rectangular panels of the decorative frieze above the temple’s columns—exist as barely legible reliefs. “An Archaeologist’s Eye: The Parthenon Drawings of Katherine A. Schwab,” currently on display at the Georgia Museum of Art through Sunday, Dec. 7, seeks to examine what has been preserved and what has been lost within the mythological narratives decorating the Parthenon.

The exhibition is divided into three sections: pastel and graphite drawings of the east metopes, which depict Olympian gods fighting Earth-born giants; drawings of the north metopes, which portray scenes of the legendary Trojan War; and a full-scale plaster cast of a metope of Helen fleeing to a statue of Athena. Schwab’s drawings are presented beside photographs of each original sculpture taken by Socratis Mavrommatis, chief photographer for the Acropolis Restoration Service, revealing subtle contours and dimensions of the carved figures.

Through combining artistic skill and archeological expertise, Schwab reimagines the panels’ ephemeral images. Classic stories such as Poseidon crushing a giant with the island of Nisyros or Hera driving a chariot led by winged horses are not always readily visible, but supplementary descriptions provide detailed information, better to interpret each metope.

A two-day international symposium on “Rethinking the Parthenon: Color, Materiality and Aesthetics” will be held on Friday, Oct. 17 and Saturday, Oct. 18, bringing eminent scholars in to present recent research on the iconic temple. Robin Osborne, professor of ancient history at Cambridge University, will deliver the keynote speech, “The Parthenon as a Work of Art,” to kick off the symposium on Friday at 5:30 p.m. From 9:30 a.m.–5 p.m. the next day, nine speakers will discuss new insights into the building’s decoration, the diversity of construction materials like white marble, bronze, ivory, gold and pigments, and the Parthenon’s historical and cultural roles in the development of classical Greek aesthetics. The conference is free and open to the public; to register visit rethinkingtheparthenon.com.

Schwab will discuss “The Parthenon Metope Sculptures: Reimagining the Lost Narratives” on Thursday, Oct. 2 at 5:30 p.m. as this year’s Shouky Shaheen Lecture, an annual series that brings a distinguished artist or scholar to campus each year. Additional events include a tour led by classics student Chiara Tondi Resta on Wednesday, Oct. 29 at 2 p.m. and a tour led by exhibit curator and assistant professor of ancient art at the UGA Lamar Dodd School of Art Mark Abbe on Friday, Nov. 14 at 2 p.m. as part of UGA’s Spotlight on the Arts festival. “Archaeologist’s Eye” will be also highlighted during the museum’s quarterly reception, 90 Carlton: Autumn, on Friday, Oct. 10 from 5:30–8:30 p.m.

Relocated Clay: After 17 years of being nestled downtown, Good Dirt Ceramics Studio and Gallery has moved to a new, permanent location. “We leased our downtown warehouse location, and encroaching development pressure caused our rent to rise dramatically and unexpectedly,” says studio owner Rob Sutherland. “When our current location came on the market, I jumped at the chance to purchase a secure permanent location for our studio.”

Owning the building, which is located at 485 Macon Hwy. near the Milledge Ave. entrance to the loop, has allowed for the customization necessary to optimize the facility as a teaching space. Students are able to have 24-hour access via keycards, and kilns vented to the outside will create a healthier work environment. Anyone who has sweated or shivered at the former location can rejoice in knowing that the studio is now climate-controlled.