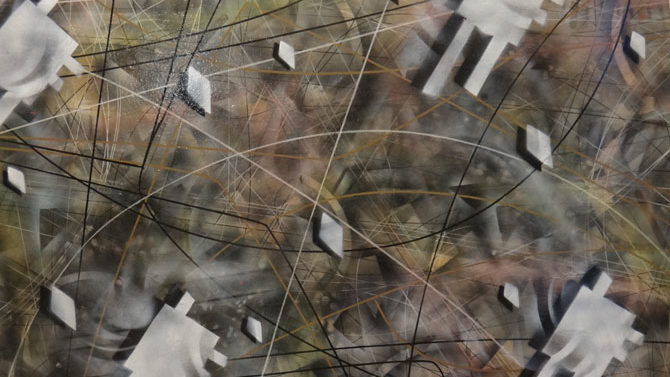 “In 1975, an artist friend of mine, Pat Powell, and me were asked to escort students from Mercer in Macon to South Georgia to help Eddie Owen Martin with his compound, Pasaquan. Eddie, my friend Pat and me were all Cancers, and we loved to create and smoke pot, and Eddie had plenty for us to smoke—not the students, but the three of us hit it off,” Pierce says. “I consider myself a close friend of St. EOM ’til the day he took his life. Not a day goes by that I don’t think of him. Eddie was the real deal.”

Though always boomeranging back to the South and his hometown of Macon throughout his life, Pierce has embarked on several adventures that have taken him all over the world. After becoming a pro at making tofu and launching Wildwood Natural Foods with friends in the Bay Area in the late ’70s, he met a German couple who invited him to travel to their town and help establish the first tofu shop in Germany. While there, he became friends with a filmmaker who was planning a project in India, and after six months of helping to build a bus, set out with the crew in ’82 to film about music, yoga and culture. A year later, he found himself working on a new project, this time focused on American Indian filmmakers and actors. “We were all over the Western part of America and Canada. We spent much time with Will Sampson, One Flew Over the Cookoo’s Nest‘s The Chief. Big time we had,” he says. “All the time we traveled, I did some crafts. Lots of beads. I was teaching Indian kids how to do bead work.”

In the mid-’90s, Pierce met his wife-to-be, Elise Lang, a captain in the Army living in Arizona, and the two later settled down in Farmington and constructed a straw bale house. Pierce’s carpe diem attitude and free spirit are reflected in his artwork, which often makes “something out of nothing” by transforming found objects and recycled materials into interesting pieces of art.

Farmington Depot Gallery is housed in a historic train depot-turned-regional fine arts gallery, 16 miles from downtown Athens at 1001 Salem Road and Highway 441. The gallery is open Thursdays–Sundays from 11 a.m.–7 p.m, and Pierce’s solo show will be on view through June.

Day Tripping: Established in 1992 as “Howard Finster Day,” Finster Fest has grown into one of the Southeast’s most popular folk-art festivals and is an important annual fundraiser for The Paradise Garden Foundation, which continues to preserve and maintain Howard Finster‘s visionary art environment, Paradise Garden, in Summerville, GA. Though located a considerable distance from Athens in Chattooga County, several connections exist between Finster—”a man with many visions” who created thousands of inspired paintings—and the Athens cultural scene. Finster rose to national recognition after R.E.M. filmed a music video for the debut single “Radio Free Europe” at his folk-art mecca in 1983, and he created the cover for the group’s second album, Reckoning. More recently, local musician T. Hardy Morris and photographer Jason Thrasher included Paradise Garden in their Places in Peril series, a collection of music videos through which one song off of Morris’ album Audition Tapes was filmed at one of 10 historic Georgia sites in particular need of awareness and repair.

This year’s free Finster Fest will be held in Summerville’s Dowdy Park on Saturday, May 31 from 11 a.m.–5 p.m. and Sunday, June 1 from 1–5 p.m. Over 50 juried artists will offer everything from paintings, pottery and jewelry to cigar box guitars, hand-dyed clothing and driftwood sculptures. Live music will be provided by Thayer Sarrano, 3 & 20, The Van Lears, Yankee Slickers, Tracie Victoria Mattox, True Blue, The Strange, Dennis Brown Trio and Daniel Parrish. Plenty of food vendors, as well as hotrods and vintage autos courtesy of The North Georgia Cruisers, will be on site. Immediately following Saturday’s afternoon festival, the party will move to Washington Street in historic downtown Summerville for a Man of Vision Aftershow featuring performances by the Randall Bramblett Band, The Whiskey Gentry, Travis Denning Band and the Grammy-Award winning Muscle Shoals country group Shenandoah. General admission to the concert is $10, and VIP tickets, which include a signed poster, meet-and-greet, and photo opportunity with Shenandoah, are $50. For more information on visiting Paradise, go to paradisegardenfoundation.org.