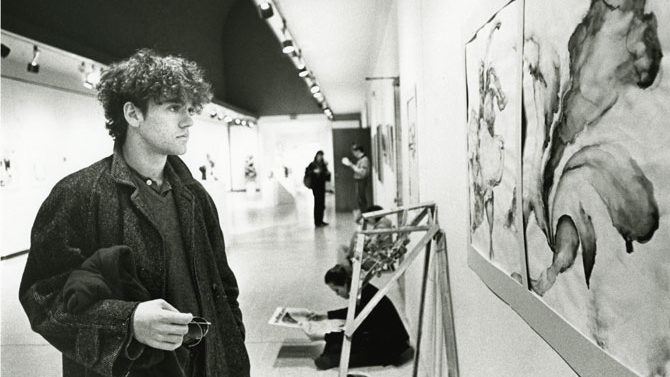 Party Out of Bounds: Art Rocks Athens is officially launching its series of May exhibitions with “ARTifacts Rock Athens: Relics from the Athens Music Scene, 1975–1985” at the UGA Special Collections Libraries. Though the Athens music scene received national attention for producing the likes of R.E.M, The B-52’s and Pylon, the emerging art scene between 1975–1985 that gave rise to the music is often overlooked. The Art Rocks Athens Foundation is a nonprofit organization that was created to explore and document this relationship between art and music through a series of retrospective exhibits.

An opening reception for “ARTifacts” will be held on Thursday, May 1 from 6–10 p.m. A screening of Spencer Thornton‘s footage of the very first time the B-52’s were caught on film will be followed by a talk from Michael Lachowski, public relations specialist at the Georgia Museum of Art, publisher of Young, Foxy and Free and bassist of Pylon. Afterwards, a runway fashion show will feature B-52’s member Cindy Wilson’s stage clothes. A DJ disco party catered by Last Resort will round out the night, with models from Athens Fashion Collective and members of local bands like New Madrid, Reptar and Hope for Agoldensummer donning vintage club and party t-shirts.

Centered around Memorial Day weekend, several other exhibitions have been organized to document this pivotal time in Athens history. “Between Rock and an Art Place” at the Lamar Dodd School of Art will feature artwork of all media. “Paper Covers Rock: Graphic Arts and the Athens Music Scene” at the Lyndon House Arts Center will showcase band posters, Xeroxed show flyers, set lists and photographs that became iconic album and magazine covers. “Not a Normal Town: Film in Athens, GA, 1975–1985” at Ciné and the UGA Special Collections Libraries will screen early experimental films accompanied by discussions with filmmakers. “Clear the Floor” will be a one-night performance at the UGA Dance Department New Dance Theater on Saturday, May 24. In “Shapes that Talk to Me: The Athens Scene, 1975–1985” at the Georgia Museum of Art, paintings from the permanent collection will be reinterpreted and augmented with other works. For a complete breakdown of scheduled events, visit artrocksathens.com.

Get Your Geek On: Rose of Athens Theatre‘s second annual AthCon—set for Saturday, May 3 from 10 a.m.–midnight at the Holiday Inn Express—is a convention featuring a masked costume ball, cosplay contest and Pathfinder gaming room, plus plenty of anime, comics and photo ops. In place of the “May the 4th be With You” fundraiser Rose of Athens hosted last year, a huge part of AthCon will focus on Star Wars. The 501st Legion will be in attendance to present a panel discussion, and RoA will perform a mini staged reading of William Shakespeare’s Star Wars, an epic Elizabethan mashup told through iambic pentameter. Other activities include Tea Time in the Cantina with music and trivia, an X-Wing Fighter game demo and a children’s light saber creation station. Proceeds from the event will help Rose of Athens—whose latest productions have included Donkey and Charlotte’s Web—continue to operate live performances, workshops, camps and its No Shame Athens playwright series. Admission to the event is $10 for children and $20 for adults, and a 25 percent discount will be offered to anyone who arrives in costume.