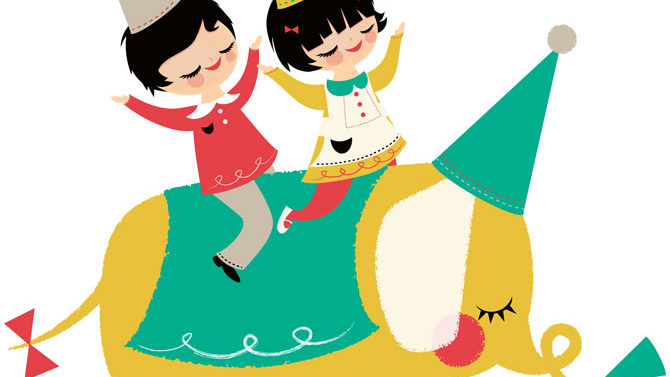 Dallion’s exhibit at The World Famous is her first to focus on illustration and includes a series of scenes chronicling the adventures and mishaps of a cast of rosy-cheeked, long-eyelashed characters that inhabit her whimsical world, Pie for Blackbirds.

“The look and situations are inspired by my fascination for vintage children’s literature and 1970s European cartoons and films,” says Dallion. Decorated with anthropomorphized animals, floating balloons and polka-dotted mushrooms, her illustrations are full of wonder and tartness. “I tend to enjoy putting [the characters] in situations of either perfect bliss or extreme annoyance. For example, Hans and Heike are featured playing guitar and dancing in a Swiss village, but Magda the Mushroom Tripper is shown clumsily falling onto her face,” says Dallion. “I like putting a twist on a happy, sunny situation. The sickly with the sweet.”

An opening reception will be held Saturday, Mar. 8, 8–11 p.m., and the show will be on display through early May.

Best in Show: The Lyndon House Arts Center will open its 39th Annual Juried Exhibition this week, showcasing 128 artworks selected from 478 pieces submitted to the competition by 182 artists. This year’s juror was Gilbert Vicario, who is currently the Senior Curator at the Des Moines Art Center in Iowa and was previously associated with the Institute of Contemporary Art in Boston and the Philadelphia Museum of Art. Seven awards and six honorable mentions will be announced at the exhibit’s opening reception, set for Sunday, Mar. 9, 2–4 p.m. The exhibition will be on display through Saturday, May 3 during regular gallery hours: Tuesday and Thursday from 12–9 p.m. and Wednesday, Friday and Saturday from 9 a.m.–5 p.m.

Media Blitz: “Alert Today, Alive Tomorrow: Living with the Atomic Bomb, 1945–1965,” currently on display at the UGA Richard B. Russell Library for Political Research and Studies, explores how messages about the threat of atomic annihilation permeated every aspect of American society’s daily life—at home, at school, in the community and at play. The exhibition presents a timeline chronicling the phases of America’s Atomic Age: “The Blast: 1945–1950” following Hiroshima and Nagasaki, “Under the Mushroom Cloud, 1951–1956” during the onset of the Cold War, and “Nuclear Fallout, 1957–1965” after the launch of Sputnik. Featuring over 75 original objects from the era, such as government pamphlets, radio announcements, newspapers, comic books and monster movies, the touring exhibition is curated by independent collector Michael Scheibach and the Curator of Humanities Exhibitions at Mid-America Arts Alliance, Leslie Przybylek.

As the program series comes to a close, the Russell Library will host four events. “Storytellers & Scholars: Life in the Atomic Age,” scheduled for Wednesday, Mar. 5 at 7 p.m. in room 285, showcases scholars, community members and archival footage in a format similar to the radio show “This American Life.” “Nuclear Threats Then & Now,” set for Thursday, Mar. 6 at 5:30 p.m. in room 271, is a panel discussion comparing American attitudes toward nuclear culture in the wake of the 1945 atomic bomb blasts to today’s current state of nuclear threats worldwide. Stanley Kubrick’s Dr. Strangelove: Or How I Learned to Stop Worrying and Love the Bomb will be screened on Thursday, Mar. 6 at 7 p.m. in room 271. The library’s First Person Project, an oral history series documenting the experiences of Georgians, will conduct interviews on the topic of security on Friday, Mar. 7, from 9 a.m.–4 p.m. in room 268.

“Alert Today, Alive Tomorrow” will be on display through Sunday, Mar. 16. The Russell Gallery is free and open to the public every Monday through Friday, 8 a.m.–5 p.m. and Saturday 1–5 p.m. Parking is available on campus in the Hull Street parking deck; just make sure to present your ticket at the lobby’s security desk for a token to get out.