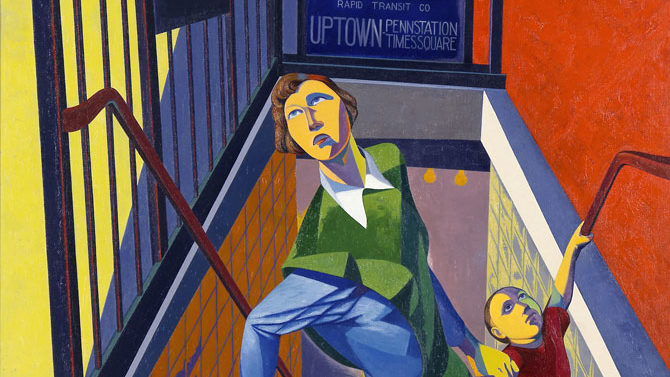 Demonstrating the value of freedom and diversity, “Art Interrupted: Advancing Art and the Politics of Cultural Diplomacy“—on display at the Georgia Museum of Art Jan. 25–Apr. 20—examines the domestic censorship of “Advancing American Art,” a program curated by the U.S. government to combat communism during the Cold War era. Hopeful that culture could help heal some of the international divisions created by World War II, art became an instrument of foreign policy and cultural diplomacy. Widespread debate on the merits of the modern art selected to represent the nation led to public criticism of the government’s role in art patronage as a whole, ultimately resulting in the project’s demise.

In 1946, the U.S. State Department, under the leadership of visual arts specialist J. LeRoy Davidson, assembled a collection of modernist paintings by contemporary American artists. The result was “Advancing American Art,” an exhibition attempting to show off America’s artistic coming of age to the rest of the world while simultaneously illustrating the power of democracy to nourish freedom of expression. In order to foster goodwill abroad, the exhibit was set to tour through areas of Europe, the Caribbean and Latin America that were viewed as the political and ideological battlegrounds between democracy and communism. After premiering in New York City at the Metropolitan Museum of Art, the exhibit was split into two touring groups, the first moving from France to Czechoslovakia and the second from Cuba to Haiti.

Despite initially being met with positive press and considerable success abroad, “Advancing American Art” soon faced controversy at home. Many people viewed modern art—with its often distorted forms and avant-garde approaches—as an inappropriate choice for attempting to represent the country in a positive light; instead they preferred more conservative, classically rendered pieces. Though many of the artists—such as Georgia O’Keeffe, O. Louis Guglielmi, Anton Refregier, Mitchell Siporin, Karl Zerbe, Walt Kuhn and Charles Howard—were essential and later celebrated figures in the development of American modernism, the underlying cultural turmoil following World War II is reflected throughout many of the works.

Ironically, while the exhibit was intended to promote freedom of expression and diversity, members of the U.S. Congress immediately began looking into the political backgrounds of the artists involved, finding many to be immigrants or leftists, with a few even holding past or present affiliations to communist organizations. The show was quickly condemned as un-American and subversive by congressmen and President Harry S. Truman. Within two years of the program’s launch, funding was eliminated, the tour came to an abrupt halt and all works were auctioned off by the War Assets Administration to buyers scattered across the nation. Though the exhibit was suspended, similar projects were later launched by the government to promote art as proof of the intellectual freedom, creativity and cultural power of America.

Using a checklist of 117 oils and watercolors sold as war surplus, the newly reassembled show at GMOA, “Art Interrupted,” reunites all but 10 of the paintings purchased by Davidson for the original exhibition. Organized by the Georgia Museum of Art, the Julie Collins Smith Museum at Auburn University and the Fred Jones Jr. Museum of Art at the University of Oklahoma, the exhibition draws from the collections of 10 museums, private individuals and other public institutions.

A preview of the exhibit will be offered during “90 Carlton: Winter,” the museum’s quarterly open house, Friday, Jan. 24 at 7 p.m. Special correlated events include a panel discussion on the issues of censorship Sunday, Jan. 26 at 2 p.m., a lecture by New Yorker writer and Harvard English professor Louis Menand Thursday, Feb. 6 at 6 p.m., a film series including Ninotchka and Notorious beginning Thursday, Mar. 20 and an emerging scholars symposium called “While Silent, They Speak: Art and Diplomacy” Friday, Mar. 28 and Saturday, Mar. 29. Programs for children include “Family Day: Modern Masterpieces” Saturday, Feb. 8 at 10 a.m. and a “Teen Studio” Thursday, Mar. 6 at 5:30 p.m.