Decking our Cover: In many communities, original artwork exists only as a luxury tucked away in 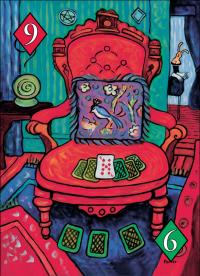 exclusive galleries or the homes of private collectors. An ongoing conversation for any community-driven gallery, especially a nonprofit such as the Athens Institute for Contemporary Art, should therefore explore how to make artwork accessible, affordable and alluring to the public at large.

“We were brainstorming ways to get contemporary art out into the public, and one of our board members, Tatiana Veneruso, owned a set of playing cards that she loved from Black Rock Collective,” says Gallery Manager Hope Hilton.

With a strong model in place, ATHICA’s board members solicited their favorite local artists to design the faces of specific playing cards, and compiled all 54 images into a full deck called “ATHICARDS.” Both emerging and established artists are represented—including the likes of David Barnes, Dana Jo Cooley, Jim Barsness, Kim Deakins, Margot Ecke, Jason Thrasher and David Hale—making this collaborative project an incredible showcase of local talent and a time capsule of the current arts scene. 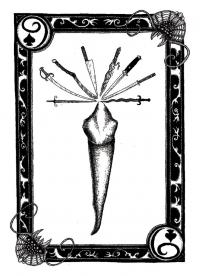 An opening reception catered by Heirloom Café, White Tiger, Marti’s at Midday, Trump’s Catering and On the Border will be held Saturday, May 25, from 7–9 p.m., and a special preview for gallery members will begin earlier at 6 p.m. Each card will adorn the gallery’s walls in its original format (paintings, drawings, photographs, digital art, collages and mixed media) and will be available for purchase. Full decks cost $20—a mere 37 cents per card—likely making this the most inexpensive collection of art prints in town.

“We believe that just the act of getting art in people’s hands and off the wall is a radical and fun approach,” says Hilton. “By making something that is clearly very functional, we are able to not only spread art around our community and beyond, but encourage card playing with an inspired deck of cards. I made it a goal when beginning at ATHICA to extend our reach beyond the gallery.”

“ATHICARDS” will be on display during gallery hours—Thursdays, 1–9 p.m. and Fridays through Sundays, 1­–6 p.m.—until Sunday, June 9, and a sanctioned game night is slated for Saturday, June 1, 7–11 p.m.

Clay Creatures: “Face Jugs: Art and Ritual in 19th-Century South Carolina”—on display at the Georgia Museum of Art through July 7—displays mystical, misunderstood works created by the enslaved African American community of the Edgefield District, an area that was rich in natural resources and dependent on slaves to operate large-scale productions of pottery. Each face carries its own distinct expression—some animated or angry, others unsettlingly vacant—with features ranging from bulging-to-squinting eyes, raised-to-furrowed brows and grinning-to grimacing-teeth. 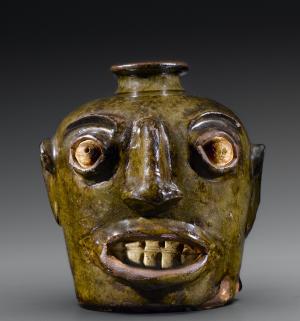 water, but later theories speculated that the jugs might have also served ritualistic purposes such as stashing magical or metaphorical materials and protecting the deceased as grave markers. Many of the African Americans laboring in the Edgefield District were brought from the Congo, and it’s not unreasonable to infer that they may have carried along the concept of “minkisi,” human-shaped containers capable of channeling or capturing spiritual entities by luring them inside with aromatic mixtures of herbs, minerals and other precious items. Because ritualistic practices were conducted in privacy, however, little documentation exists to support these claims—aside from the slaves’ standardized use of kaolin, a white clay considered as sacred in West Africa.

Face jugs have long been appropriated by contemporary white artists, such as popular (and widely respected) north Georgia potter Lanier Meaders, whose jugs can easily sell for over $1,000 each. The new wave of face jugs are typically created and viewed as nothing more than simple, whimsical artifacts of regional folk art, however, which often undermines the historical significance and symbolic power of the original works.

Skylines and Exit Ramps: “Cityscapes by Ben Aronson”—on display at GMOA through June 30—is a collection of oil paintings depicting hazy scenes of major cities such as Los Angeles, Santa Monica and Paris. Straddling the line between realism and abstraction, the paintings appear unfocused and 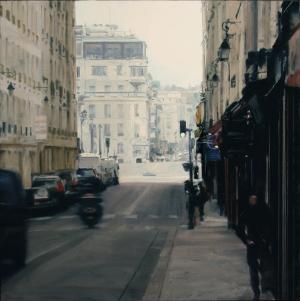 impressionistic up close, but take a near-photorealistic shape at a distance. Naturally, several paintings reflect influences of their pictured location’s corresponding art movement such as the Boston Expressionist School, the New York School of Abstract Expressionism and the Bay Area Figurative Movement. While based off of real locations and occasionally including a recognizable landmark, the paintings exclude specific details, instead relying on a developed sensitivity towards light and shadow to create each mood. This ambiguity allows viewers to recollect and project their own memories. Aronson’s blurry style creates images that appear to be in motion—as if they were snapshots captured by pedestrians or car passengers traveling through the city—reflecting the energy and pace of the urban environment.

Up Ahead: The Oconee Cultural Arts Foundation (OCAF) in Watkinsville will host its “Annual Members Exhibit,” featuring over 125 works by gallery members, from Friday, May 24–Friday, June 21. A special display of plein air paintings by Robert Clements, titled “Oconee Landscapes,” will fill the adjacent side gallery. Opening receptions for both exhibits will be held on Friday, May 31, 6–8 p.m.