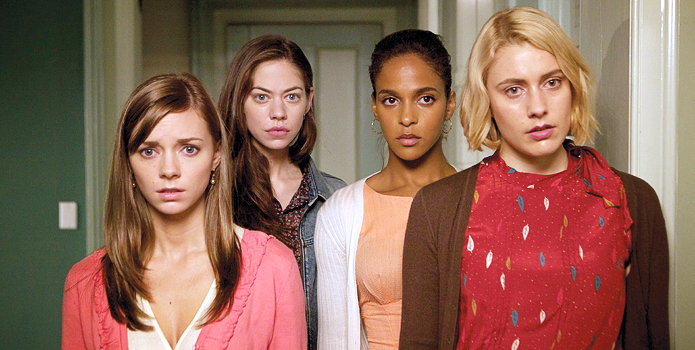 Whit Stillman, director of the films Metropolitan, Barcelona, The Last Days of Disco and, most recently, Damsels in Distress, comes to UGA Thursday for a lecture, before Damsels screens in the UGA Tate movie theater. Flagpole spoke with him before the talk.

Damsels in Distress [2011] is about four young women at a small, liberal arts college who aim to turn the animalistic fraternity boys they know into respectable men, and to prevent students from committing suicide by giving them dance lessons and hygiene instruction.

Flagpole: Damsels in Distress is a humorous combination of earnestness and triviality. Could you tell me a little bit about what you wanted the tone of the movie to be?

Whit Stillman: The earnestness is the characters’ utopianism: they want to make Seven Oaks University a better place in their view, which is a partial return to the world of Grace Kelly and Audrey Hepburn. Or, less ambitiously, to domesticate the animals of Animal House. The triviality is—well, that’s the comedy—and they find plenty to be ridiculous about. The girls’ thinking is somewhat exalted: Excelsior! (Higher!) was the working title.

FP: The movie was described as somewhat of a sequel to The Last Days of Disco. Was that your intention? How did the different time periods in which each movie was made contribute to the obstacles the characters face?

WS: The first three films we did were lightly connected so that The Last Days of Disco comes between the time periods of Metropolitan and Barcelona and tangentially links them. The characters did face the challenges of those periods; the collapse of social norms in the disco era and the dicey last years of the Cold War in Barcelona, but the present is challenging too. The pretense that this is the way things are and ought to be, when in fact they can and will be changed too, potentially in a direction we would prefer.

FP: How would you describe the world in which Damsels in Distress is set? What do the characters assume about their world?

WS: From the conception of the idea—four college girls with floral names out to transform a fictitious university with a Roman-letter fraternity system—it was not going to be cinema verite. Greta Gerwig’s ringleader character has decided that the way to live in a future she likes is to bring back some elements that appealed to them of the past. The director of the Dublin Film Festival, where Greta won the Best Actress prize, described Damsels as “Jane Austen meets Animal House.”

FP: Do you plan to continue making movies with this same kind of storyline or similar characters? What is it about privileged and sometimes clueless young people that draws you to represent them in film?

WS: I see the first three films, Metropolitan (available on streaming Netflix if anyone cares to check it out beforehand), Barcelona and The Last Days of Disco as naturalistic in style with the comedy coming out of the small predicaments and hesitant identity formation of the characters. Damsels in Distress begins a series of three films of more exalted comedy, somewhat in the spirit of Wes Anderson’s Rushmore. I have always been interested in youngish characters as they are more apt to be at multiple crossroads with an accent on romance. But the characters for the next two films won’t have much to do with those of the earlier ones.

For the talk I hope to delve into the subject of career crossroads—my background was in journalism, publishing, writing, business and sales—not just the movie business, though there should be that too. The careers that sound good or glamorous often aren’t, while jobs that sound obscure or ignominious can be really great. And the ways to find the right career path are rarely clearly visible.