I need help coping with an annoying person whom I cannot avoid. I am a graduate student here in Athens, and all the students in my program tend to hang out together. I really appreciate the camaraderie, but there is one other person in my program whom I find really annoying. Kind of arrogant and self-absorbed; not a major a-hole, but just someone I would avoid in other circumstances. In group situations, she always ends up dominating the conversation with dramatic stories of her daily life. If I try to lighten the mood or change the subject, she always finds a way to bring it back to her, or to take offense to my levity. The thing is, though, our program is pretty small, and we have already established a group dynamic to socializing. It would be pretty weird and obvious if I arranged a lunch date with the few people minus this one annoying person. Is there anything you recommend that I could do between the two extremes of confronting her directly about her annoying habits and avoiding all social events with my fellow graduate students?

You’re right—the two extremes you mention are both losing situations for you. You don’t want to forfeit the camaraderie and networking among your cohort, and confronting her directly would cause unnecessary drama. It would also make you look like the bad guy.

There are two things you can do to work around this girl. First, invite one other person from your program to hang out. Then you’re not specifically excluding this girl; instead, you’re building individual relationships with the other students. If your program is big enough, you could even invite two people out. You can do this as many times as you want, with as many of the other students as you want; just make sure it’s a very small group each time.

The second thing you can do is wait it out. The behavior you described doesn’t usually go unnoticed. Other people will pick up on it and have some degree of aversion to it as well. As time goes on, stronger friendships will naturally develop among some of the people in your group. As that starts to happen, you will have more opportunities to spend time with smaller groups of people, hopefully minus this girl.

One thing you must not do is give in to the temptation to talk badly about this girl among your cohort. You will be very tempted to mention, casually, that Annoying Girl always seems to have a crazy or dramatic story and see if your complaint gets any traction. Don’t do it. Other people might try to start that conversation and see if you bite. Don’t. You will only come off looking bad. A month from now you’ll be reading a letter in this column about the girl in the program who always stirs the pot and talks trash about the other students.

I just moved here, and I am renting a room month-to-month from a woman who accepted the first month’s rent as a check, but for the second month she asked me to pay cash. She said she needed to keep her traceable income low, so that she could qualify for higher subsidies on her (exchange-based) health insurance premiums. This makes me uncomfortable, and I’m not sure how to respond.

Heeding that feeling of discomfort any time you have it is a good rule for life. Don’t try to silence that discomfort, and don’t let anyone else silence it. Other people—like your landlord—will say things like, “it doesn’t matter” or “no one else will find out” or “all the other tenants have done this.” None of those things are relevant, and none will carry any weight if St. Peter or the IRS confront you about your actions. You can’t go wrong following your own conscience.

It sounds like you’ve arrived at a hard point: Your conscience doesn’t want you to pay your rent in cash. I suggest you write her a check the next time the rent is due and give it to her without comment. She knows she’s already asked you for cash; by ignoring her request, you’re sending an unspoken message that you don’t want to do that. If she asks for cash again, you can tell her that paying cash isn’t convenient for you. If she persists, ask if cash payment is a condition of living there. This will force her hand a little.

Any suggestion that you would move out over this will end it. Finding and vetting a roommate is a hassle. The time when a new roommate is moving in, getting settled, and the roommates are getting used to each other is also a hassle. You have the upper hand here—you’re paying her money she clearly wants and needs, and since you’re already moved in, inertia is on your side.

Background: My mom is 85 and lives alone in Atlanta. She’s very independent, but she’s definitely elderly. Since my dad died three years ago, she’s become increasingly timid. Small, everyday things—like a problem with the TV that necessitates calling the cable company—almost overwhelm her. The thing is, she’s actually very capable, but the thought of having to deal with stuff like that intimidates her. I know it’s because my dad handled so much of that stuff, so it’s kind of new to her. I think it’s also difficult for her because having to do this stuff underscores my dad’s absence.

Last week, my mom went to the store operated by her cell phone provider (one of their own stores, not an authorized provider) because her phone is old, and needed to be replaced and upgraded. At the store, the salesman she ended up with was really rude to her. Not just rude, but dismissive and impatient. Several times while he was “helping” her, he walked away and got into a conversation with his coworkers. My mom had to approach him each time to finish her transaction. After she had purchased a new phone, she asked if he could transfer her contacts for her (a service I have had done every single time I’ve gotten a new phone). He initially said it couldn’t be done, then backtracked and said it could, but it would take “too long,” so he’d only transfer five contacts for her.

Rhonda, I don’t want to interfere where it’s not warranted, and I don’t want to make my mom upset or dependent on me, but I’m having trouble letting this go. It simultaneously breaks my heart and makes me furious to think of someone acting this way. I think it really bothered her, too. She almost never complains about this kind of thing, but she’s mentioned it several times since it happened and I think her feelings were hurt by it. Should I confront this guy? Let it go? Hire a hit man? 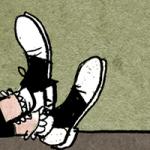 Man, I hate this guy already. His job is to assist people in the store. Some customers need a lot of assistance on a particular day and that’s why he’s there. His behavior sounds dismissive, unhelpful and lazy. I’m not sure he quite deserves to be assassinated for it, though.

Confronting him will almost certainly not bring you the satisfaction you’re looking for, and it carries the risk of transforming you into a crazy, screaming person. I’d suggest a detailed letter to the manager of the store. The letter should be factual and specific but not emotional. It’s an emotional situation for you and your mom—and rightfully so—but that won’t carry the day with the store manager. Hearing the specifics of the employee’s rude behavior and how reluctant either of you will be to use the store again will be more effective. And, of course, let him know you’re anticipating a reply. The good thing about a big company is there’s always someone higher up you can appeal to if you don’t get a satisfactory response.