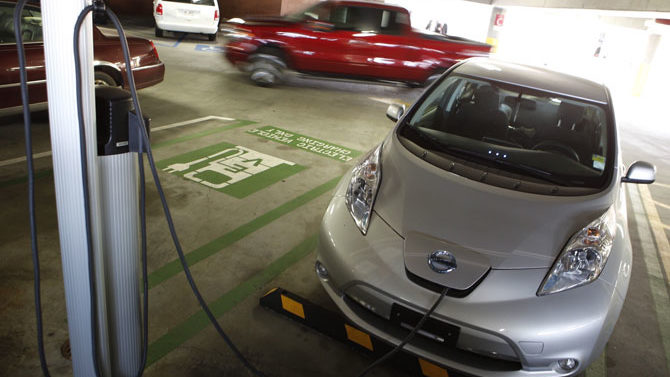 At a time when the University of Georgia and Athens-Clarke County are increasing the convenience of owning electric cars, legislation in the Georgia General Assembly may make it more expensive.

UGA installed two electric car charging stations in February, adding to one they installed in 2014, and Athens-Clarke County will also soon install eight chargers, making it easier for the community to own electric cars.

Don Walter, the director of UGA’s parking services, says the university installed the chargers in the north, south and east decks after several requests from campus visitors and parking services customers. He says he’s heard that people have bought electric cars after the charging stations were installed, because that made owning an electric car much easier.

Despite the efforts by UGA and the Athens-Clarke County government, owners of electric cars may be forced to rethink their use of them. Rep. Chuck Martin (R-Alpharetta) has introduced legislation, House Bill 122, that would eliminate the $5,000 tax credit currently available to owners of electric cars in Georgia. In addition, the transportation funding bill recently passed by the House would charge alternative fuel vehicle owners a $200 annual fee.

“It doesn’t mean for sure that we wouldn’t keep the electric car, but it takes it from being a no-brainer to being something that we would have to crunch the numbers a little bit more,” says Chet Boyd, an Athens resident who leases an electric car. Boyd says he began leasing the car after learning that the current tax credit would make leasing a new electric car cheaper than paying for gas in his older car.

The removal of the tax credit at this stage would be premature and hurt car sales, Boyd says, but the tax credit is only necessary until electric cars become widespread enough to be more affordable.

“The tax credit doesn’t need to exist for forever, but it does need to exist for long enough for enough people to adapt the technology, and then the cost of electric cars will come down and become equal on the playing field with mass-market vehicles,” he says.

Eliminating the tax credit would hurt electric car sales and, ultimately, harm the environment, says Kevin Kirsche, director of the UGA Office of Sustainability. “I think it would be short-sighted to eliminate the tax credits at this stage,” Kirsche says. “I definitely believe that the tax credits help to incentivize usage of electric vehicles, and that is a positive for all of us in the community.”

Gabe Rand, the technology director at Athens Chevrolet, says he doesn’t believe the passage of the bill would decrease their car sales. Most people who buy an electric car have the resources to do so without the incentive of the tax credit, Rand said.

“The tax credit is just icing on the cake for buying an electric car,” Rand says, pointing out that Athens has a progressive culture. “Athens is a very green, very progressive city, and people would rather spend a little more to ensure that it is sustainable,” he says.