Recent Wrecks Show Why Prince Avenue Should Be Safer 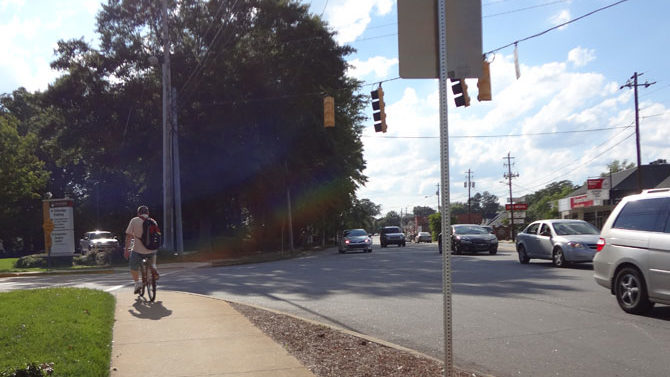 Three people are riding their bikes on Prince Avenue toward downtown. A car coming the other way sits at the light at Talmadge Drive. The light turns green; the driver turns left. Blinded by the late afternoon sun, he doesn’t see the cyclists. Two dodge him. A third lands on the hood, rolling onto the windshield, and is taken to the hospital with cuts and a concussion.

That scenario, which happened late last month, is all too common. As anyone who walks or bikes along Prince Avenue will tell you, crossing Prince or one of its side streets often means taking your life into your own hands.

Changes could be coming soon. “Something needs to be done,” ACC Commissioner Mike Hamby says. “Obviously, people need to slow down as they get closer to town. How we achieve that is a question that needs to be answered.”

A study of Prince Avenue by the ACC Planning Department doesn’t answer those questions. Released last year, its recommendations focus solely on zoning, to the chagrin of some neighborhood residents who lobbied last month for a look at traffic safety. Then, less than a week later, three people on foot or riding bikes were run over within a five-day time span.

Around 5 p.m. Friday, May 24, a 22-year-old University of Georgia student on her bike was hit by a man in a Lincoln who was turning left onto Talmadge Drive. The driver told police that they came out of the shadows, and he never saw them until he hit one.

Six hours later, a Sunset Drive man was walking across Oglethorpe Avenue just a block away when the same thing happened. A woman driving an SUV turning left off of Prince hit him; that driver also said she didn’t see the pedestrian, according to police.

And Tuesday, May 28, a 16-year-old was pedaling his bike on Prince past Nacoochee Avenue when a car turning right off the side street pulled into his path.

“This series of accidents, whether they would have occurred under a different lane configuration, at least shows that we need to be attentive to safety,” says Commissioner Kelly Girtz.

Luckily, none of the three suffered life-threatening injuries, according to police and a spokesman for Athens Regional Medical Center, where they were taken for treatment. But that isn’t always the case when a human being collides with a 3,000 pound metal object.

There have been 20 crashes involving bikes and 18 involving pedestrians on Prince Avenue between Oglethorpe Avenue and Pulaski Street from 2003-2012—the second-most of any street in Athens behind Lumpkin Street, according to James Barlament, program analyst for the Traffic Safety Research and Evaluation Program at the University of Georgia College of Public Health. Of those, 34 resulted in minor injuries and two in serious injuries; one cyclist died.

About three quarters of such accidents are the motorists’ fault, Barlament’s research shows. Drivers turning left or, less commonly, right, at a crosswalk were the cause of most pedestrian crashes. Those involving bikes were split evenly among drivers turning, pulling out of parking spaces and running down bicycles from behind.

Bike lanes may not have prevented wrecks like the ones last month. How could such accidents have been avoided? “Driver awareness,” says David Clark, director of the ACC Transportation and Public Works Department. “Those types of accidents are typically very hard to prevent.”

Bike lanes can serve to make drivers more aware, as urban planner Jeff Speck pointed out when he touted New York City’s green-painted bike lanes during a recent lecture in Athens. Not only have bike lanes reduced traffic collisions by 40-50 percent—for cars as well as bikes—but sales tax collections along those routes have spiked, indicating that business is booming, New York City Department of Transportation Commissioner Janette Sadik-Khan told the National Bike Summit in March.

By making cyclists feel safer, bike lanes can also entice more people to pedal, which also increases driver awareness, says BikeAthens Executive Director Tyler Dewey. “There is definitely a safety in numbers effect as the number of cyclists increases in town,” he said at a National Bike Safety Month press conference May 20.

Other measures can make streets safer for pedestrians, cyclists and cars alike, such as refuges for people crossing on foot, which also subconsciously signal drivers to slow down and look out.

“Prince needs a traffic-separated bike lane, and it needs traffic calming to slow down cars and allow them to see bicyclists,” says Hunter Garrison, a University of Georgia College of Environment and Design graduate student and a BikeAthens board member who was hit riding on Prince two years ago. “Prince is fast and dangerous, and I really hope that the most recent accidents can galvanize the city to do something about it, rather than waiting ’til something worse happens.”

Even before the recent wrecks, residents near Prince were already lobbying for safety improvements as part of the corridor study.

“Athens-Clarke County has adopted a Complete Streets policy that requires attention to all modes of travel in a corridor design,” Tony Eubanks, who spearheaded the CAPPA effort to remake Prince 10 years ago, told planners last month. “If any street deserves this attention and has shown the potential to capitalize on a Complete Streets approach, it is Prince Avenue.”

ACC planners have said the Oak/Oconee/Lexington Road corridor is first on the list for Complete Streets improvements. (It has fewer wrecks than Prince, Barlament says, but more deaths and serious injuries.) However, Eubanks and BikeAthens Chairman Elliott Caldwell question why both can’t be addressed simultaneously. “It’s a lot of work to do at once, but they can both be done at the same time,” Caldwell says. “It doesn’t have to be one or the other.”

ACC planning commissioners, many of whom have already said they want a transportation component to the Prince Avenue corridor study, will take it up again Thursday, June 6. Then it will go to the Mayor and Commission as early as July, and when it does, Girtz and Hamby say they intend to direct staff to look at safety improvements. Because development generates traffic, zoning can’t be divorced from transportation, they say.

Girtz says he would like to see a transformation on Prince like the makeover given to Baxter Street in the early aughts. Between Pulaski Street and Milledge Avenue—the part of Prince under local control—”it seems pretty sensible to me that would be three-lane,” he says, adding a center turn lane and bike lanes in exchange for two travel lanes. In addition, adding the turn lane would allow for pedestrian refuges on crosswalks near The Grit and Piedmont College.

About 17,000 cars per day use Prince along that stretch, according to Clark. That’s well below the 20,000-car threshold for successful three-laning without impeding traffic (which is slower on three-lane roads than four-lane roads but also flows more smoothly). ACC usually considers three-laning when repaving four-lane roads. Prince isn’t due for repaving for another three years, Clark says, but the cost to restripe it is minimal, so Girtz says there’s no reason to wait.

From Milledge Avenue to Oglethorpe Avenue, improvements aren’t as easy, because the state Department of Transportation owns that section of Prince. But there’s already a center turn lane, and enough right-of-way to add bike lanes without taking away travel lanes, Girtz says.

“I want to see all those things happen, and I’m confident all those components will be part of the plan in the end,” he says.