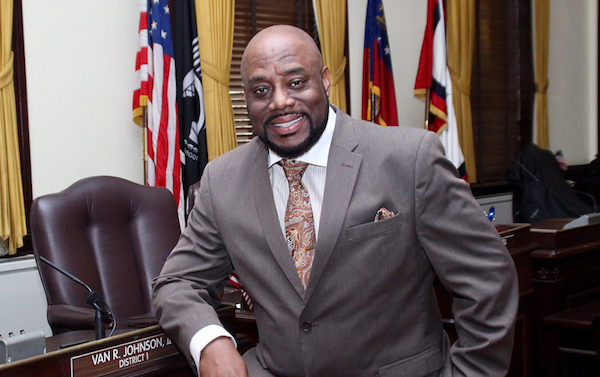 Savannah Mayor Van Johnson issued a shelter-in-place directive Tuesday banning people from going out in public except for essential services while also urging the governor to order more restrictions than he did Monday to stem the spread of COVID-19.

Savannah, which imposed an initial round of COVID-19 regulations Saturday, is following the Georgia Municipal Association’s recommendations that local governments declare a public emergency so that cities are consistent in their approach to the rapidly spreading virus.

The Association County Commissioners of Georgia, meanwhile, issued a statement late Tuesday saying it will defer to what local officials think is best for their community. So far, at least 70 counties have declared a public health emergency. The group has already canceled its plans for a late April convention typically attended by nearly 1,000 elected officials and staffers.

The push from the association of Georgia’s thousands of city officials comes as Gov. Brian Kemp faces criticism for not taking stronger action on Monday when he announced a two-week ban on gatherings that don’t adhere to the six-foot separation rule, the closing of bars and nightclubs and a stay home order for the state’s most medically fragile residents.

The state of emergency directive is recommended by Carlos del Rio, an infectious disease expert and a professor at Emory University School of Medicine, who told the municipal association that the spread of the disease caused by the new coronavirus could overwhelm hospitals unless stronger action is taken.

“While Gov. Kemp’s executive action announced (Monday) addresses some of the critical needs in our state, I do not feel that it goes far enough in ensuring the health and safety of our citizens,” Savannah’s Johnson said during Tuesday’s announcement. “Because of this, I will be sending Gov. Kemp a letter today requesting greater state oversight and consistency in rules across the state.”

Kemp said in an interview on Tuesday with 95.5 FM WSB that it’s going to take more than government regulations to stop the spread of the disease and said there’s a delicate balance between people’s safety and limiting the economic fallout.

The shelter-in-place order for the elderly and medically fragile is based on how other states are responding and the direction Georgia’s death rate is trending, Kemp said.

“Even though most of the healthier younger population have no big issues with this in most cases, they can spread the virus to those who are medically fragile so that’s why we need to really protect the elderly, folks in nursing homes,” he said.

Other local officials across the state were left with a tough call: Should they essentially shut down their community?

The outbreak is expected to cause economic hardships across the state and nation as businesses close and unemployment figures rise. The city of Savannah estimates daily losses of $150,000 in city revenue.

Other communities like Columbus, Dalton and Macon-Bibb County are imposing emergency orders preventing bars, gyms, salons and barbershops and various other types of businesses from remaining open, but have refrained from implementing curfews or shelter-in-place orders.

In Monroe County, the city of Forsyth declared a state of emergency on Monday banning gatherings of 10 or more people, but it does not require any businesses to shut down or set a curfew. Georgia officials are opening a new quarantine location in Monroe County.

In Cobb County, home to 90 of the state’s people who tested positive as of Tuesday, Commission Chairman Mike Boyce announced an emergency declaration last night that included a shelter-in-place order that his region’s top public health official urged him to issue.

“This is not an easy call because no matter how right the decision is, we are going to impact adversely the lives of people one way or another,” Boyce said earlier at the online commission meeting.

Commissioner Lisa Cupid pressed Boyce to err on the side of tough strategies that only exempt essential workers and businesses.

Deputy Editor Jill Nolin contributed to this report, which originally appeared in the Georgia Recorder.