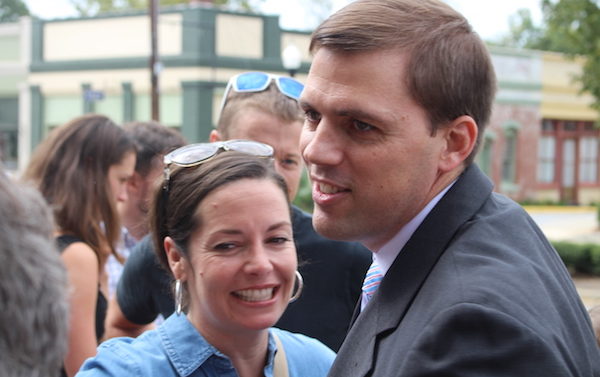 Jonathan Wallace hosted supporters across the street from the Oconee County Courthouse Saturday morning to kick off his campaign in the special election to fill Chuck Williams’ vacant District 119 seat.

Wallace, a software developer and member of the board of directors at the tech incubator Four Athens, spoke briefly, outlining some key advocacy points of his campaign, including internet and health care expansion and education reform.

“The state tried to take over the control of our local schools,” he told the crowd, referring to the controversial charter-schools amendment that was defeated at the ballot box last year. “That is unacceptable. Running for this position, I will fight to protect our public schools for our kids.” Wallace called for an end to “high-stakes testing.”

He also stressed the need for an independent redistricting commission for the 2022 elections, when districts will be redrawn following the 2020 census. Republicans in the state legislature redrew Democratic-leaning Athens’ districts in 2006 and 2012 to favor GOP candidates.

“All over the state of Georgia, we’ve got districts that are very weird shapes,” Wallace said. “We need to have an independent redistricting commission so your voice is heard everytime you go to the polls.”

Stacey Evans, a Democratic candidate for Georgia governor who was busy attending various events in Athens last week, and Russell Edwards, an Athens attorney and business owner who’s running to replace Diane Bell on the Athens-Clarke County Commission, were also in attendance advocating for Wallace.

“This district was carried by Donald Trump by six points. This is a district that we’re going to win,” Edwards said, emceeing the kickoff event. “The Republican party in Oconee County is divided, literally.”

Wallace faces an uphill battle in District 119. Roughly a fourth of the district is in blue-leaning Clarke County, while the rest is made up of the much more red Oconee County. Wallace and members of his campaign are hoping a transportation sales tax vote on the Clarke County ballot will help attract more Democratic Athens voters than special elections typically draw.

Williams won the seat in a special election in 2011, paralleling this year’s race, which seems destined for a runoff. In 2011, Williams and two other Republican candidates split the vote, sending the election into a runoff between Williams and the sole Democratic candidate, Dan Matthews. In the runoff, Williams beat Matthews by close to a two-to-one margin.

The district was redrawn to add more Democrats in 2012 and bolster Democrat-turned-Republican Doug McKillip in District 117, but remained conservative enough that no one challenged Williams in 2014 or 2016. But Williams stepped down in August to become director of the Georgia Forestry Commission, and winning an open seat is usually easier than defeating an incumbent.

After Thumping Tennessee, It’s Time to Get On the Bulldog Bandwagon