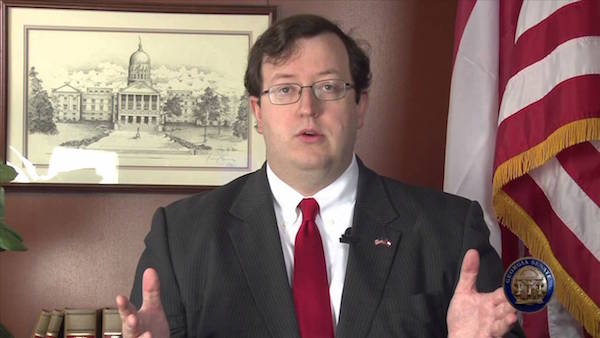 This is a fight over “freedom” that legislators don’t really need. It’s a fight they could have avoided. But it seems to be a fight that they are destined to have. We’re talking about the freedom to discriminate against gays if you can convince the authorities that you are doing so out of a sincerely held religious belief.

In last year’s session, we had the Religious Freedom Act, authored by Sen. Josh McKoon (R-Columbus). The bill says you can’t be punished if you run a bakery and, on religious grounds, refuse to bake a wedding cake for a same-sex couple. McKoon says this is merely a protection of religious freedom against government intrusion.

Religious conservatives strongly support McKoon’s bill, but it has generated powerful opposition not just from civil libertarians but also from large business organizations like the Georgia Chamber and dozens of major corporations across the state. Business leaders fear that passage of the law would blow up in Georgia’s face and bring on the same kind of negative media coverage that a similar law did in Indiana last year.

House Speaker David Ralston doesn’t like McKoon’s bill and has his own version, the Pastor Protection Act. “Ministers will not be required to conduct wedding ceremonies if it conflicts with their religious belief,” Ralston said of his bill.

Sen. Greg Kirk (R-Americus) has added the third side to the triangle with his First Amendment Defense Act (FADA), which he introduced late last week. Under Kirk’s bill, if an organization like an adoption agency refused on religious grounds to provide services for a same-sex couple, then local governments could not punish or fine that business.

Kirk’s bill, as with McKoon’s, has the support of conservatives and fundamentalists. Mike Griffin, the head of the Georgia Baptist Convention, attended Kirk’s news conference and looked on approvingly as he talked about his bill.

Gay rights organizations like Lambda Legal, on the other hand, denounced the proposal. “Georgia’s anti-gay lawmakers are once again trying to allow religious discrimination in many areas of life for Georgia’s families, workers and others,” said attorney Beth Littrell. “We have seen this over and over—bills that say they are about protecting one thing when the real goal is to target and discriminate against gay and transgender people and people of minority faiths, with vast implications for everyone.”

Complicating the debate is the fact that legislators are convening at the same time that candidates are revving up their campaigns for the May 24 party primaries. The key days are March 7–11, which is when candidates formally quality for the primaries. Some lawmakers are afraid they will draw primary opposition if they don’t vote for these bills, no matter how they feel personally about gays. If debate on the bills is delayed until after Mar. 11, when candidate qualifying ends, then legislators who don’t have primary opposition would have more flexibility to vote their true convictions.

Gov. Nathan Deal doesn’t have to worry about primary opposition—he says he’ll never run for political office again. Deal also loves nothing better than to announce the arrival of new businesses in Georgia. Will he join forces with the business groups and speak out against any of the bills?

“The legislative process is about compromise,” Ralston said. “I’m hopeful that we will find a path to resolve the concerns on both sides of that issue.”

Kirk said he recognizes that same-sex marriages are “the law of the land” but hoped that his bill would encourage the two sides to “live and let live.” That may be a little too much to hope for.