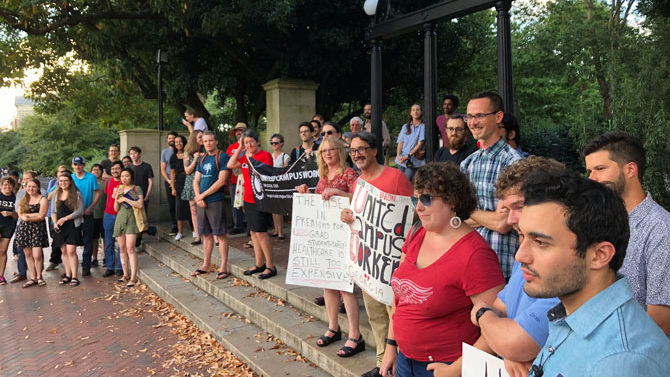 The University System of Georgia agreed to give graduate students a seat at the table to address concerns about health insurance premiums and coverage.

After graduate students were shocked to discover last year that their dependents’ premiums would more than triple—a decision USG partially reversed after outcry—the United Campus Workers of Georgia wrote to the USG in December insisting on reforms that would give the union and its members more input into future changes. The letter called on USG to announce insurance rates for the following year by Mar. 1; create a commission consisting of faculty, administrators, graduate students and union representatives to study the price and limitations of USG health insurance plans; and designate a human resources staff person to help settle insurance claim disputes.

USG agreed to announce insurance plan information and premium rates by the end of the spring semester, appoint the advisory committee and appoint a staff member to “act as a liaison for student questions and concerns regarding health insurance claims,” according to the union.

The dialogue between USG and UCWGA comes after USG informed grad students of a 345 percent rate hike for dependents over the summer. At a town hall meeting at UGA in August, Karin Elliott, interim vice chancellor of human resources for USG said graduate students’ dependents’ claims were 481 percent higher than university students as a whole in 2017-2018.

After a contentious town-hall-style meeting and a United Campus Workers protest at the Arch, USG said that it would cut rates for 2018–2019 academic year by nearly $2,000. The premium increase for spouses was reduced, and the hike for children was dropped. But that still left married students paying significantly more than they have been—$589 a month this year, versus $187 last year.