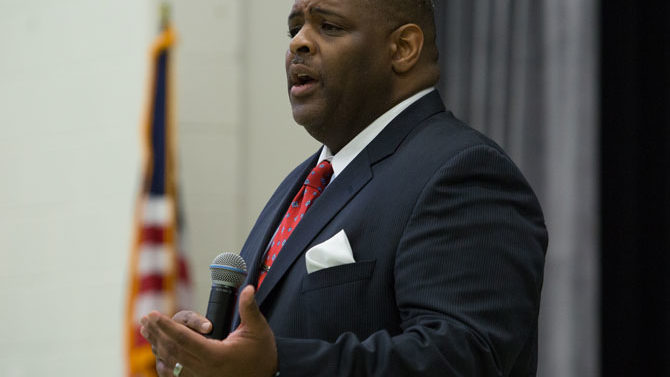 Ordinarily, showing up for a job interview an hour late might slightly decrease your chances of being hired. But Demond Means had a good excuse.

His flight from Milwaukee to Atlanta was delayed four hours (not to mention the traffic caused by the I-85 bridge collapse). In a testament to how much interest the community has in the new Clarke County School District superintendent, about 250 of the 300 people who made it out to far-flung, transit-less Whitehead Road Elementary School in the rain on Apr. 3 stuck around to hear him talk.

Many in the audience were suspicious. The school board had promised a public forum with three finalists, but by the previous Friday, that had turned into a forum with a sole, as-yet-unnamed finalist. As it usually does when there’s a lack of transparency, gossip filled the information vacuum. (My favorite rumor was that the new hire would be John Barge, the Republican former state school superintendent who once misspelled “governor” while running for governor.)

Monday morning—just hours before the forum, and after some prodding from school board members—board President Charles Worthy announced Means as the sole finalist. His resume, frankly, was a bit underwhelming, headlined by eight years as superintendent of the relatively small (3,700 students, compared to CCSD’s 13,600) Mequon-Thiensville school district in a very white, very affluent suburb of Milwaukee.

Nonetheless, board members insisted that Means—who was raised by working-class parents in inner-city Milwaukee and graduated from public schools there—is well equipped to tackle the challenges facing a majority-minority district in a community with a crushing 50 percent child poverty rate.

Means described himself as someone who’s committed to social justice and marginalized students, even challenging the board in his interview to go “all in,” according to BOE member John Knox.

“I firmly believe our most marginalized children deserve the most attention,” Means said. “Those children who don’t have an advocate in the superintendent’s office or other places are the ones who need us the most.”

One of the reasons Means felt drawn to Clarke County, he said, is the opportunity to help minority and low-income students. Although Mequon-Thiensville is 78 percent white, Means outlined some of the things he has done for minority students there, such as putting math and literacy specialists in every school, and taking African-American boys to college campuses and black-owned businesses to learn academic skills and gain exposure to role models. He also led a statewide initiative to close Wisconsin’s achievement gap, the widest in the nation.

As Means explained it—and his explanation is backed up by Milwaukee news sources—he took fire from both sides, refusing to bow to pressure to actually turn those schools into charters, and also unable to reach an agreement with the Milwaukee school district on a plan that left local control intact, so he resigned rather than do something to harm public education. “I walked away from that position when I became aware it wasn’t about kids anymore; it was about politics,” he said.

“Public education is under attack,” school board member Greg Davis said, and Means will defend it.

“I’ve gotten a sense of true courage [and] conviction,” board member Linda Davis said. “I believe he will stand for children and stand against anyone who comes after him for that.”

Former Superintendent Phil Lanoue’s name never came up, but the way Means described himself sounded like the anti-Lanoue, which might be just what Athens needs to rebuild trust after the Cedar Shoals sexual assault last year caused a substantial portion of the community to lose faith in CCSD leadership. He is a collaborative leader, he said, a listener and a motivator who seeks input from all parties before making a decision, and will support teachers while demanding excellence from both staff and students.

“You can only have equity if you have high expectations for every child,” he said. “I believe every child can learn at an amazing rate that will surprise their teachers and, in some cases, even their parents.”

Means agreed with a questioner who asked if too many students are “pushed out” of schools and into the Ombudsman program for those with disciplinary problems.

“The more we can keep them all under one roof and serve their diverse needs, the better,” he said. “I know it’s a real harsh word to use, but you’re segregating those kids when you send them to an alternative place.”

And he said he would work to produce more “homegrown teachers” as a way to make the district’s faculty more diverse.

His answer to a question on technology drew applause. Lanoue’s signature “one-to-one” initiative to give every student a laptop or tablet and transition away from textbooks has been criticized by some parents. While praising the program, Means cautioned that technology is only as good as teachers’ training to use it. “The one-to-one initiative is an amazing use of funds in technology for learning,” he said. “I also say, ‘Technology is a tool.’ It’s a tool for learning. If the focus is on technology, we have a problem we need to step away from.”

On a personal level, Means sought to allay concerns that, because he’s spent his whole life in the Milwaukee area, he might not stay in Georgia for long. He has a four-year-old in pre-K in the Mequon-Thiensville district, and said she’ll become a Southern belle. “What drew me to Clarke County is this is a place I can raise my daughter,” he said.

By the end, Means seemed to have won over skeptics. “I loved his answers—all his answers to his questions,” parent Marissa Joyner said. “He’s really focused on serving underserved children.”

Mequon-Thiensville officials have said they want to keep Means, but his hiring moved forward Apr. 6, when the CCSD board formally named him the sole finalist after a half-hour private meeting. That vote triggered a mandatory 14-day waiting period, and assuming no dirt on Means emerges in the meantime and Mequon-Thiensville doesn’t make him a Godfather offer, the board will vote to officially hire him May 4.

CCSD’s 2018 budget will probably be set by the time Means takes the offer, so it falls to Interim Superintendent Jack Parish and board members to find a solution to a $3.8 million shortfall in the upcoming fiscal year.

In past years when it’s run a deficit, especially during the recession, the district has used reserves to balance the budget. That fund balance—leftover money that’s rolled forward year to year—stands at about $23 million, but Hammel cautioned that the district should keep reserves of at least 15 percent of its $147 million budget.

The proposed budget already includes 2 percent cuts to all areas, and more cutting would be difficult, Hammel said, since 67 percent of funding goes directly to the classroom (not even counting other essentials, like buses and building maintenance). Neither is raising taxes an option, since school property taxes are capped out at 20 mills.

The board is expected to approve a tentative budget Apr. 13, followed by public hearings May 9, 16 and 23, and a final vote June 8.

Fireworks will return to downtown this Fourth of July (technically, Saturday, July 1). Athens-Clarke County commissioners approved $63,150 in funding for the fireworks show at its Apr. 4 meeting, although some of that expense could be paid by private sponsors.

Even Commissioner Jared Bailey, whose district includes Bishop Park, the site of past Star-Spangled Classics before the celebration was cut from the county budget in 2008, acknowledged that downtown is the better site, citing its plethora of parking and restaurants.

However, Eastside Commissioner Andy Herod and Atlanta Highway Commissioner Jerry NeSmith said they’d like to see the show move around to other locations in future years. (Georgia Square Mall took over the fireworks in 2014 and 2015.)

The commission also approved a $75,000 loan for the Athens Neighborhood Health Center, which is facing a $200,000 budget shortfall and was recently forced to close its Jefferson Road clinic, one of the three locations. The ANHC treats low-income, Medicaid and uninsured as well as privately insured patients.