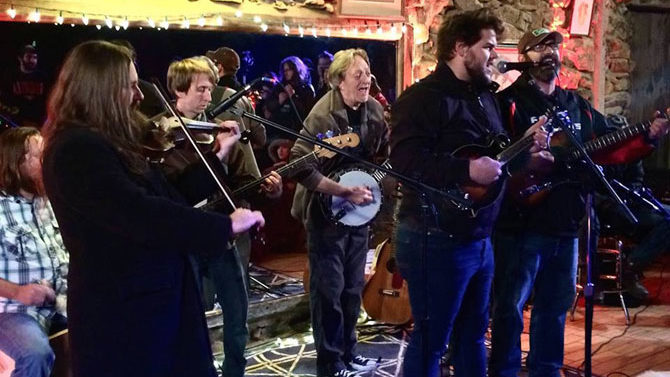 Because this is the final column for the year, I wanted to say thanks to the whole Athens music scene for producing such an astounding amount of good music in 2016. Honestly, this was one of the best years for local music I’ve experienced in a long time. Before we get into this week’s news, let’s take a moment to remember those we lost this year—specifically, Allen Owens, Ross Shapiro, Daniel Marler, Jeremy Ayers, Curtis Vorda and Charlie Pruet. Each left his own indelible mark on both our town and our arts scene, and is incredibly missed by friends, loved ones and even acquaintances. Y’all take good care of each other out there, have a great set of holidays, and we’ll see ya when the calendar turns.

DEEP BACKGROUND: Musician Jason Trahan has released two new collections of his experimental collage music, which he plays under the name Lipperskip. November brought us Updated Sound Files, and this month rained down Additional Updated Sound Files. Trahan works via very large canvases, and every track runs an average of 15 minutes. Instrumentally speaking, his work is best when explored with keyboards and synths, but falters when guitars are brought in. Structurally, nearly every track is hell-bent on its own disintegration. That is, each begins with a discernible beat and melody but works itself into a steady lather of layered noise, eventually becoming completely deconstructed, and not always to great effect. I’m still kinda on the fence about Lipperskip, but looking forward to hearing more. See lipperskip.bandcamp.com to understand my point.

WATER IS LIFE: Laura Camacho (Athens Tango Project) has organized a cool lineup for an even greater cause. The Stand Up for Standing Rock benefit show takes place at Little Kings Shuffle Club Thursday, Dec. 29 from 4 p.m. to midnight. This event costs $10, and all funds are to be donated to help with legal and medical costs for those at the Standing Rock Indian Reservation. The live music lineup will feature the Pylon Reenactment Society, Sunny South Blues Band, The Grawks, Garett Hatch, Broken String Band, Incatepec, The Hobohemians, Tino Garrido and Ryan “Manito” Wendel, John Fernandes and Robert Black Eagle Costa. Camacho says Costa has just returned from spending three weeks at the embattled North Dakota area, and both she and he will pay close attention to those who he knows are still there, “triple check” everything they hear regarding their needs and distribute funds accordingly. All other funds will be donated to standingrock.org, and I’d encourage everyone to head there and read up. It’s amazing how much clarity on an issue one can gain when going directly to the source.

CARPET’S BROWN FOR A REASON: The old homeboys in Hayride are up to their annual holiday shenanigans. For the group’s fourth annual Hayride Holiday Party, they’ll be at the Georgia Theatre Friday, Dec. 30. Also on the bill this night are the now-once-a-year phenomenon and old favorites Ceiling Fan, as well as the current and always performing Shehehe. Doors open at 8 p.m., and the show starts at 9.