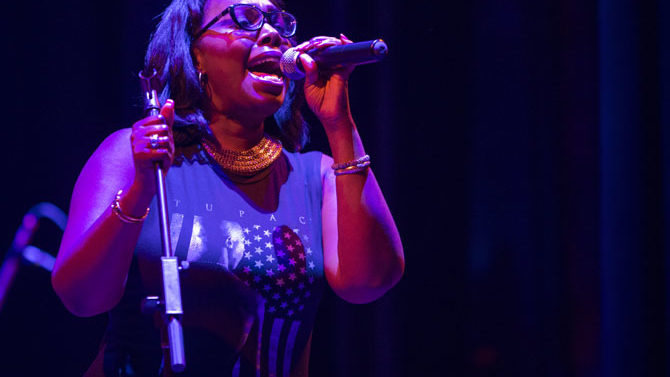 Following Athens’ first-ever Martin Luther King Jr. Holiday Parade and Festival, which kicks off at the corner of Hull Street and Hancock Avenue Monday, Jan. 16 at 3 p.m., the 40 Watt will host an accompanying concert, dubbed Athens in Harmony Redux. The event was conceived during a City Hall vigil in July 2016 that was held in response to the Dallas police killings, as well as the police shootings of African Americans Alton Sterling and Philando Castile.

Athens in Harmony organizer Pat Priest was at that vigil. “I thought, when looking at Mokah [Johnson], ‘Now is the time, and these are the people.’” Johnson, the co-founder of the Athens Hip Hop Awards and a leader of the Athens Anti-Discrimination Movement, had helped organize the rally, and Priest thought she and her husband, Knowa, would be perfect candidates to help transform her idea into reality.

To complete the team, Priest brought Athens-Clarke County Police Chief Scott Freeman on board. In a time when so much tension exists between police and the black community, Freeman’s involvement added to the power of the first Athens in Harmony event, which took place Oct. 30 at The Foundry. “This community is diverse in every arena,” says Freeman, “and diversity should not only be accepted, but should be embraced at every level.”

At the October concert, musicians of varying cultural backgrounds, races and genres were paired up for collaborative performances. Priest says it was fun to see what songs artists chose, especially with the genre crossovers involved. Many chose protest songs from the 1960s that still carry meaning today. Most of the songs were also written and originally performed by black artists, bringing even greater significance to the performances, as the audience was reminded of how much the black community has contributed to American culture. Johnson says the successful event “reflected a new Athens, a more diverse [Athens]—a community that supports justice and equality.”

With the looming inauguration of President-elect Trump, Priest decided to hold another Athens in Harmony event on MLK Day. Ten duos will perform, many of which are returning pairs from the October concert. Priest hopes the event and its timing will allow people of all races, creeds and lifestyles to come together as one community—to step out of their comfort zones and get to know one another.

“I hope the event does more than just bring awareness,” says Darrin Ellison, who performs as the rapper Elite the Showstoppa. “I hope it shows unity. I hope it brings clarity. I hope people walk away with a more open-minded outlook on the human race.”

In the face of recent hate speech and hate crimes nationwide, Caroline Aiken, Ellison’s performance partner at the event, wants to be “the first one to say, ‘Not in my name!” she says. “That’s pretty much why I’m there. That’s not gonna happen on my watch. The more that people do that, the better off we’ll be.”

Themes of love and togetherness drive Athens in Harmony. Aiken says she loved how diverse the crowd was at the first installment. “When I go to a show, it’s normally all black [or] all white, depending on the performer,” she says.

It is this mixing together that breaks down the barriers of racism and bias, says Freeman, adding, “As a community, we must take appropriate steps to set community norms that no form of discrimination will be tolerated.” As artists gets to know other artists, and audience members get to know others in attendance, the hope is that this tolerance of discrimination breaks down.

“People are pretty much afraid of the unknown,” says Aiken. “The more they understand someone, the less they’ll be afraid of them.” So, Freeman urges, “Come out and let the music unite.”