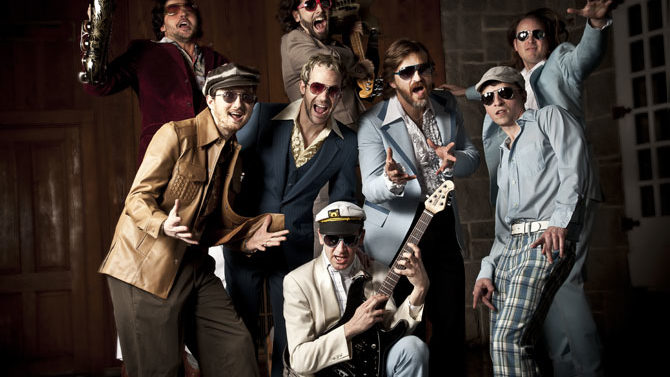 If there’s one thing you can always count on Athens to provide, it’s blurry, debaucherous Halloween fun. Whether you spend the night downing shots and badly dancing to “Gangnam Style” with that sexy Psy you spotted across the room, bar-hopping past last call with the other 13 Miley Cyruses in your party or raising the dead with your fellow Obamacare vampires, it’s guaranteed to be one to remember—or not.

But all that controlled chaos can’t just happen on its own—it’s gotta be set to live music, right? Thankfully, there’s a whole bloody gob of the stuff going down Halloween night, which this year happens to coincide with UGA’s fall break. That means that even though the holiday falls on a weeknight, you can count on being surrounded by ghouls, goblins and Walter White zombies galore.

The South’s preeminent vampire hillbilly puts on a spooktacular show no matter the time of year. It’s blood icing on the maggot-filled cake that we have him in town on All Hallow’s Eve. See story here.

Atlanta’s kings of smooth-sailing cover tunes (think AM-friendly soft rock from the ’70s and ’80s) will don their red leather jackets and wolfman garb and perform the King of Pop’s seminal 1982 LP in its entirety. Dance ’til you drop, but before you do, expect—nay, demand—a bonus encore featuring another set of the group’s pleasure-zone pop.

Not only a chance to see local heavyweights Dead Confederate and The Powder Room rock through originals and covers—though it will be that—Stan Mullins’ Halloween happening on Pulaski Street promises art, DJs and plenty of libations to keep you lubricated. Discounted advance tickets are available at Model Citizen Salon, and all proceeds benefit local nonprofit Community Connection.

To this bunch of pop weirdos, Halloween is just another day. With experimental synth group Half Acid’s scheduled performance of minimalist composer Terry Riley’s famous drone piece “In C” (a heckuva left-field cover-band choice, if you ask me) standing as the exception, the groups on Thursday’s 40 Watt bill will reportedly perform as their own bad selves.

The 1980s and ’90s are alive and well over at the Caledonia, where the four all-star tribute bands listed above will perform the music of Nirvana, Soundgarden, the Cramps and the Minutemen, respectively. Expect dirty tones and deep cuts. Put on your finest flannel and rock the night away.

Aside from the Swag Dick Cats, which will play rock and soul oldies blown out and up with garage-rock attitude, there’s no word on whether any of the locals playing Flicker will be doing the covers thing—though each is quite capable of chilling the spine with original material. Mother the Car offers a scary, sexy take on the blues. Newbies the Frequencies and Shades Martel round out the bill.

Move your undead body and “Monster Mash” it up to sounds provided by local musician John Swint, who will spin your favorite spooky tunes ’til late.

It ain’t Halloween in Athens without a DJ Mahogany dance party, and this year the bodacious baldie is setting up shop at Little Kings, where he’ll spin hellish jams into the late night. Before his set, enjoy a debaucherous set of GG Allin and the Jabbers covers courtesy of the Fuck-Ups.

The Dictatortots’ October residency at Hendershot’s concludes with a mysterious holiday-themed finale. The band promises to be in “full rock mode,” but still, this one’s for the early risers. Says the band: “We will send you screaming into the night, carefully packing up your laptops and ordering final lattes to go.”

Hear our compilation of Athens’ favorite Halloween jams over on Homedrone.