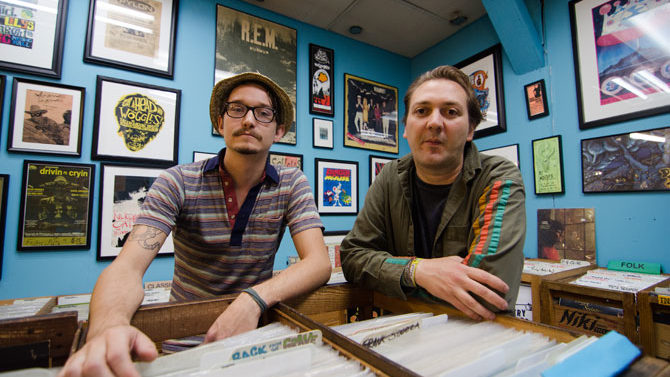 As AthFest invades downtown and floods our streets and ears, it’s impossible to deny the power and presence of our music scene. There are hundreds of bands spanning countless genres, and they’re all rooted in our little town. In keeping with the spirit of celebrating all things Athens, this week’s Mixtape Wars features all local music.

Scene vet Andrew Rieger, frontman for Elf Power (playing Pulaski Street Stage, 7:45 p.m. on Saturday), dug deep into his personal archives for a selection of obscure gems both old and new for his local mixtape. “I opted to omit songs by more popular acts like R.E.M., The B-52s, Pylon, Neutral Milk Hotel, etc., even though those are some of my all time favorite bands, in order to examine some lesser known songs that are equally deserving of praise.”

He’s paired with relative newcomer William Chamberlain, Flicker barkeep and frontman for Flagpole award-nominated country-rock act Vestibules (playing midnight at Flicker on Friday). “I searched for some personal songs more than obscure [ones],” says Chamberlain on his mixtape strategy. “Most of these tunes were written and recorded by mutual friends, and it was difficult to cut some that didn’t make it. I felt like with it being a local theme, it should be a little more nostalgic, and I tried to give praise where I thought it deserved.”

Why William Chamberlain picked this track: Manray was my pick for band of the year. Try to never miss a Caledonia show. They own that room. This song should come with a ski mask and Rambo knife.

2. “4th Night” by Hope for Agoldensummer

WC: I’ve loved this song for years. Happy to be in the position to take it down off the shelf and share it. OK, I’ll say it: this is my favorite song! Very sexy and honest at the same time. Usually doesn’t work like that.

WC: I can’t begin to imagine what I could say about Vic. I never met him. His music has moved and inspired me in the years since I’ve moved here. This tune has a fantastic ending.

AR: Excellent choice! Amazing lyrics comparing himself to many famous literary monsters… building into a masterful, awe-inspiring, self-deprecating, anti-religious diatribe. This is a perfect example of Vic’s lyrical and musical prowess—unmatched by any in Athens or elsewhere.

4. “An Eluardian Instance” by Four Eyes (of Montreal cover)

WC: Hmm. All I can say is I can’t believe how intense the ukulele gets toward the end of the song. Rock on, Erin [Lovett]!

AR: I like the way that the multi-tracked vocals are brought in and out from time to time to effectively accentuate certain phrases. Very nice mood overall.

WC: Always a sucker for a girl with a baritone guitar! I had the pleasure of working in a kitchen with Helen [Rhinehart] a few years ago. They changed the name before they broke up, but I don’t remember what it was… Get Sad still has a MySpace.

AR: I hadn’t heard this live version before. It’s great—an anomaly in the R.E.M. catalog for sure. It sounds like an old Motown ballad. The falsetto is really nice and really out of character for Michael, making it that much cooler. The long held out note at the end is fantastic, and I love the simple, distorted guitar solo leading into the breakdown.

WC: Nesey had come to be one of my closest friends in Athens. Too bad he’s gone. Here’s an old chestnut…

AR: I like the muffled, ghostly nature of the recording giving it a timeless feel. The vocals and sparse playing add to the eerie feel.

8. “Jill” by Timmy Tumble & the Tumblers

WC: Oh, those wild Wednesdays when I’m bartending and Tim [Schreiber] is one of three patrons… and there are candles and chill jazz music. Wild. Be careful you don’t catch a boot to the face at the show at Flicker Friday of AthFest. It’s not just a clever name.

AR: This distorted live recording is great, capturing the unhinged, deranged blast of this great live act. A great, squealing guitar solo takes it over the top, and Tim’s crazed soul-singer delivery is killer.

WC: The Sniper guys have always been good to me. I’ve been trying to talk them into starting a label with me. Very talented musicians and engineers. They drink OK, too.

AR: A weird ballad. I really like the warbling, effected backing vocals a lot. Nice cacophonous buildup at the end.

WC: Gonna go out like I came in, but let’s change up the ski mask and Rambo knife for a motorcycle jacket and some chains. You’re all fools if you miss Dex [Romweber] when he roles through town… fools!

AR: Great, great band… Along with the Cramps they led the ’80s rockabilly revival, but they brought their own unique and potent sleazy vibe to it.

Stream this mix in its entirety here!

1. “Do the Method” by Method Actors

AR: Released in 1980, a great blast of nervous, jittery energy with some sonic similarities to peers such as Pylon and Mission of Burma.

WC: Definitely hear the Burma. Also maybe some Plimsouls and Devo. Like the guitar lick and the lyrics. Good opener.

AR: A fantastic pop/rock gem—hard rocking and catchy, featuring a blazing slide guitar solo that comes out of nowhere in the middle to blast your face off.

WC: Great choice! One of the most listenable pop songs to escape Athena’s vice-tight grip. Perfect summer tune. Love songs that do “do do do do”!

WC: Yes! I need more of this. I need to know more about this. Like, was this ever released in the States? Where was it recorded? When was it made? My brain hurts!

AR: It was an EP only released in Japan. I think around 1999–2000. They recorded a lot of it at their home studio and some with David Barbe at Chase Park, I think.

4. “Why Do Lonely Men & Women want to Break Each Other’s Hearts?” by The Star Room Boys

AR: “Drunk, wild and free,” indeed! Truly and honestly as good as any classics of country music by George Jones, Merle Haggard or Willie Nelson—lyrically, vocally and musically.

WC: Blame it on my momma, I’ll take some sad honky tonk over anything. Especially when it concerns drinking and broken hearts. Is that two pedals I hear?

5. “Don’t Think About Death” by The Humms

AR: One of my current favorite newer Athens bands, this track is a fine example of their fuzzy, scuzzy, melodic garage rock.

WC: I’m thinking I’m on the beach and Dracula is there. Wolfman, too. Also, who’s that doing the limbo? It’s Mummy. You’re so silly, Mummy. Monster beach party. Get it on!

6. “Bony Maurine” by The Visitations

AR: An excellent combination of organic and electronic elements with lovely wistful lyrical imagery makes for a truly unique recording.

WC: This is my favorite of your tracks. It’s a wonderful song—well written, well recorded and well played. I’m gonna actually spend money on this. Also, pretty sure this is the first band to have the misfortune of sharing a bill with me in Athens.

AR: Vic was, in my opinion, Athens’ best-ever songwriter, so it’s hard to pick just one of his songs, but this one always connected with me in all its lethargic, loping beauty. When I played with Vic for a few years right before his death, I insisted we play this song live, and I always loved trying to replicate the meandering, intertwining guitar lead outro played here by Vic and Jeffrey Richards, though we never quite nailed the sublime beauty captured here.

WC: I definitely agree that Vic is the best you can get in Athens. The most clever, ironic, bitter and hilarious lyrics I’ve ever heard… here or anywhere else. I recommend every Athenian own at least At the Cut. Damn, that’s a fantastic record!

8. “Until Your Temples Are Pounding” by Macha

AR: A majestic instrumental mixing fuzz bass and all manner of bizarre and lovely sounding hammered Indonesian instruments, the soaring melody and raucous performance is magnificent.

WC: Jesus! The answer is yes, my temples are pounding. Had to start this one over and turn it up. Don’t even want to try naming a single instrument on this track. Do I hear bagpipes? I love it!

AR: One of the greatest live acts I’ve ever witnessed. Dextrous musicianship with some similarities to their peers at the time such as Jesus Lizard and Slint, with depraved, sexual lyrical ramblings that combine for a sonic experience like no other.

WC: This took me a few times through before I liked it. I do, though. Reminds me of the Chicago scene. The guitar is all over the place. Kind of makes me want to start a fight.

10. “Double Axel” by Still Small Voice and the Joyful Noise

AR: A mournful, wintry dirge with an appropriately glacial pace slowly builds into a powerful crescendo.

WC: What a great way to finish. Chill tune with great distortion tones and understated vocals. Can’t decide if I want to take a drive through the country or take a shower.