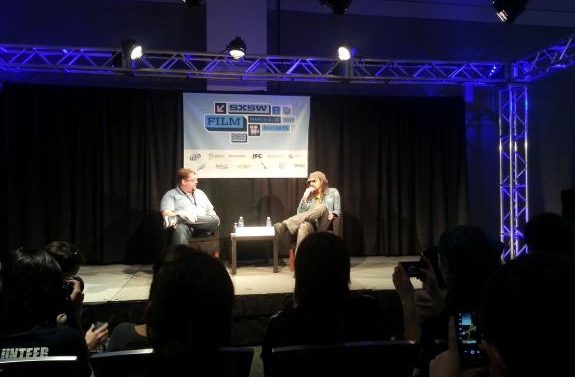 At this point, Rob Zombie’s film career has lasted as long as the band that launched him into popular consciousness. While White Zombie might be long gone, fans of Rob’s work can take solace in knowing that his newest film, Lords of Salem, is just over a month away from being released. On Tuesday, Zombie joined film and music geeks alike for a conversation about the film’s production, ultimately telling aspiring artists not to worry about pleasing everyone and that “going unconventional” is sometimes a bold but necessary move.

Although the session was predominately about Zombie’s latest film (one, he says, that needed the genre label “psychological thriller” rather than horror in order to gain support from producers), the conversation often veered into discussions about film scoring. John 5, a member of Zombie’s band, scored the film. At one point, Zombie remarked that the film itself was an experiment in creating a film around moods produced by sounds.

Zombie’s latest film also inspired a novel of the same name. Written with the help of ex-communicated Mormon B.K. Evanson, Lords of Salem is the story of a recovering drug addict DJ named Heidi that is the unfortunate recipient of a promotional record by a band named The Lords. After playing the record on air, people close to Heidi start to die. Unlike the serialized films of Halloween and House of 1000 Corpses, Zombie insisted that Lords would be a one-off film noting that he “liked the idea of things ending” with this one film.

For those diehard fans of Zombie’s work, the future was also a topic for discussion. Rather than staying firmly in the horror genre, Zombie disclosed that he’s signed on to do a “real-life” hockey film about the 1974 Philadelphia Flyers when he isn’t working on new music.

Utah Is Metal and More