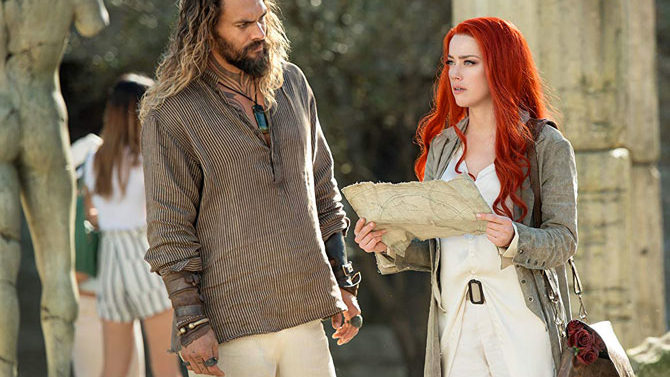 Aquaman is not the first time the DCEU “got it right.” Wonder Woman does exist, and I have become a huge Batman v Superman apologist. However, the decision to bring one of the Justice League’s middleweights to the big screen has freed this polarizing universe from its bleak bonds and unattainable preconceptions with its most colorful, creative entry yet. An octopus plays the drums, for crying out loud!

The Conjuring director James Wan has wacky fun soaking in the sun-drenched badassness of Jason Momoa’s charismatic machismo. As origin stories go, Aquaman, aka Arthur Curry, possesses a fairly unique one. The son of a lighthouse keeper (Temuera Morrison, best known as Jango Fett) and a runaway queen (Nicole Kidman), Aquaman is no billionaire playboy, gawky teenager or alien refugee. He is the half-human heir to the throne of Atlantis, currently held by his thoroughly unlikable half-brother, Orm (Patrick Wilson). Now, all Aquaman and redheaded underwater princess Mera (Amber Heard) have to do is find a legendary trident before Orm starts a war with the surface world. This Indiana Jones sidequest is made more difficult due to Black Manta (Yahya Abdul-Mateen II), an arch-nemesis Aquaman created during some careless early superheroing.

Wan’s wild movie has everything you want—if, like me, what you want are psychedelic underwater visuals, an Atlantis that resembles a Greek Gunga City, Aquaman talking to fish while decked out in orange and green and Black Manta’s ridiculously oversized, red-eyed diving helmet, which, naturally, Manta builds to a Depeche Mode song. Aquaman’s brand of quippy superheroics—its hero takes nothing seriously while saving the world—is far from original; seven years ago, Green Lantern failed using a similar formula. Yet thanks to the film’s risk-taking creatives, the King of the Seven Seas provides the breezy fresh start DC’s often overly-devoted fanbase needed.