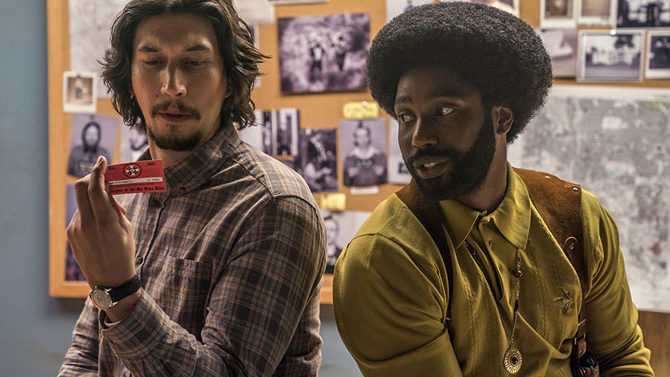 Spike Lee puts out a lot of movies, and every few years one of them captures the cultural zeitgeist. It has been about a decade since the acclaimed director of Do the Right Thing has been able to capture the attention of a wider audience with Inside Man, but BlacKkKlansman is way more of a true Spike Lee joint.

Lee’s wild film is based on the wilder true story of Ron Stallworth, the first African-American police officer in the Colorado Springs Police Department, and the time he infiltrated the local chapter of the Ku Klux Klan. As played by Denzel’s son, John David Washington, Ron is an old-fashioned, straight-laced black guy attempting to break one of the era’s glass ceilings while those in power fear a coming race war; a big, splashy investigation like his penetration of the KKK is just what Ron thinks he needs to do to be accepted. Lucky for him, a white, Jewish officer named Flip Zimmerman (Adam Driver) agrees to go undercover as the face of Ron. Eventually, the duo even meets David Duke (Topher Grace).

Lee uses Stallworth’s story to make a film about today’s America that more audiences may be able to digest. He and a team of writers get in their barbed comments about Trump, neo-Nazis and making America great again, but the pummeling fists are clad in chic velour gloves to ease the pain. Lee finds plentiful laughs in the comical Klansmen typified by I, Tonya’s Paul Walter Hauser, but do not think for a moment he doesn’t see the seriousness in the current climate. His documentarian coda makes it quite clear how far he thinks we have to go.