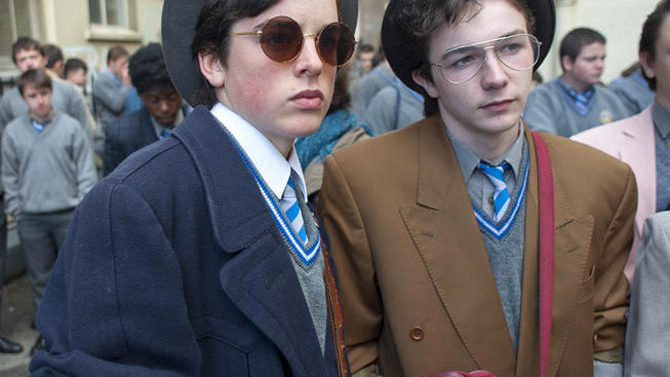 Irish filmmaker John Carney would have to catch lightning in a bottle twice to reach the musical high notes hit by his romantic 2007 gem Once. (Though affable enough, 2013’s Begin Again was certainly a little flat.) Darn it if his latest musically inspired motion picture, a teen rom-dramedy, does not come close to meeting the high expectations established by his one-of-a-kind breakthrough. Even a last act slip-up cannot sour this modern musical experience.

Set in Dublin circa 1985, Sing Street follows a motley band of youngsters from Synge Street Christian Brothers School. Conor (Ferdia Walsh-Peelo) is struggling with a new family dynamic—his parents (Aidan Gillen and Maria Doyle Kennedy) are on the verge of separation—and a new educational environment until a chance encounter with model-cum-dreamer-cum-foster kid Raphina (Lucy Boynton) leads him to start a band. Apparently, Conor has major undiscovered musical chops. Led by carrot-topped entrepreneur Darren (Ben Carolan), Conor meets musical savant Eamon (Mark McKenna, capably aping Napoleon Dynamite), who can play all the instruments, and the duo start making like Lennon/McCartney, writing hit after hit. Most are inspired by Conor’s muse, who stars in their above-average, on-a-budget music videos.

Fewer complications pop up than one might imagine in a musical fairy tale. After a spate of school-related violence—some by abused bully Barry (Ian Kenny), some by abusive school principal Brother Baxter (Don Wycherley)—Conor is left alone to write great songs and star in better-than-expected music videos. Everything would be perfect were it not for Raphina’s on-again, off-again boyfriend who listens to Genesis. And he should not be a problem, according to Conor’s slacker brother, Brendan (Jack Reynor), who declares, “No woman can truly love a man who listens to Phil Collins.” (Not true, Brendan, so not true.)

Not even the dissolution of Conor’s parents’ marriage is terribly traumatic. A smarter ending is out there somewhere, but the movie is as infectious as the ’80s earworms Conor mimics. Like Carney’s Once, Sing Street begs to be seen by all young musical dreamers and hopeless romantics.