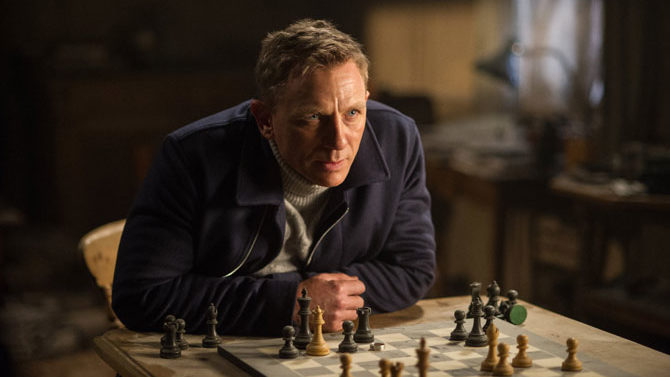 All of my complaints about Skyfall—probably the most overrated Bond film of all time, which is not the same as saying it is one of the worst—reared their heads again in Daniel Craig’s fourth outing as 007. But first, what worked:

Against the wishes of the new M (Ralph Fiennes, who owes a stuffy debt to 11-time M Bernard Lee), Bond races from Rome to Austria to Morocco to fulfill a last request of his now-deceased mother figure, Dame Judi Dench’s M, which will reveal more of the secret agent’s orphan past. Bond uncovers a shadowy terrorist organization led by the enigmatic Oberhauser (Christoph Waltz), who may be more to Bond than first appears, and meets a new lover, Madeleine Swann (Léa Seydoux).

The longest Bond yet grasps for greatness in its first two acts before plummeting into boring predictability in its overlong climax. The big reveal of Waltz will surprise not one filmgoer with a minor Bond education. Worse, Waltz, the most perfectly cast Bond villain ever, is woefully ill-used in the movie’s less dynamic last third, and further highlights the aversion to fun suffered by the current version of Bond. The last time Bond went so serious, fans suffered through the near franchise-killing duo of Timothy Dalton adventures.

Skyfall and Spectre have a lot in common with Dalton’s woeful final appearance, Licence to Kill, where Bond goes off the reservation. This renegade plot device is unnecessary for an agent classified 00 by the British government, but apparently appeals to the Skyfall/Spectre creative team, which must feel it is making a Cold War dinosaur more relevant for a post-9/11 world. Thanks, Bourne Identity.

A new Bond is always a movie moment celebrated by the franchise’s multitude of fans, be it stud or dud. Even the worst Bond movies are usually entertaining, and Spectre, with so much working in its favor, is not one of the worst. So why is it ultimately one of the least enjoyable to watch? A Bond movie need not become as stupid as Die Another Day nor as silly as the unfairly maligned Moonraker by simply injecting a bit of humor. Even the most beloved Bond of all, Sean Connery, seemed to enjoy his job. The Craig Bonds, specifically Mendes’ last two, take themselves far too seriously; a lack of comic self-awareness removes these entries from contention for ultimate Bond greatness. Complain about Quantum of Solace’s messy narrative and brevity, but the shortest Bond film ever is the only Craig Bond that seems remotely related to the Bonds of old, which, despite many conflicting opinions, is not a bad thing. (Quantum of Solace is not a fun Bond movie; it is merely less of an endurance challenge.)

Despite Spectre’s flashes of brilliant Bond, it is time for Mendes to move on. If Craig, a charismatically sociopathic portrayer of this classic character, goes, too (as he has intimated in interviews), it would not hurt if producers brought in someone who was a little Moore fun. Hugh Jackman, anyone?