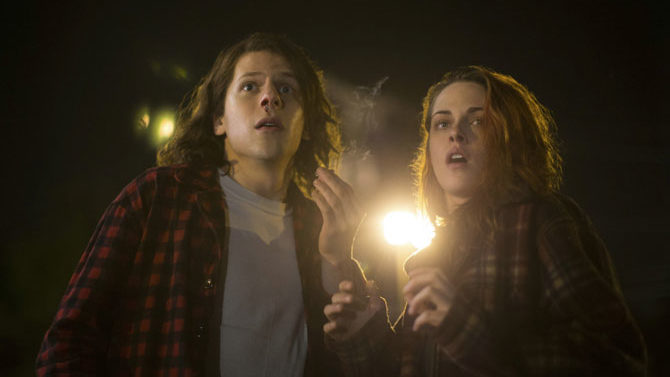 A surprising blast, American Ultra feels like the movie Ruben Fleischer keeps trying (and failing) to make. Nima Nourizadeh’s followup to the rather dreadful Project X is one of the more pleasant cinematic surprises of 2015. It expands on the ultraviolent comic book ethos of the Millarverse brought to the big screen in Matthew Vaughn’s adaptations of Kick-Ass and Kingsman: The Secret Service with none of those movies’ built-in audiences. It also helps rebrand Jesse Eisenberg in advance of next year’s appearance as supervillain Lex Luthor in Batman v Superman: Dawn of Justice. And screenwriter Max Landis is able to build on his reputation after the success of Chronicle (unlike Josh Trank, whose rep tanked along with his Fantastic Four reboot).

Mike the stoner (Eisenberg) discovers he is a sleeper agent after the CIA, represented by Topher Grace, decides to kill him. Mike cannot remember what he had for breakfast but happens to be a secret agent savant, dispatching his enemies with spoons and cups of noodles. He is Jason Bourne if Jason Bourne smoked a bunch of pot rather than worked on his killer abs and parkour.

Eisenberg makes a rather believable secret secret agent. He even makes his relationship with that coldest of fish, Kristen Stewart, seem real. She almost seems like she cares about him, too. Almost. The adult cast—Connie Britton, Tony Hale, John Leguizamo and Bill Pullman—is swell, though “Justified”’s Walton Goggins, whose grin is as big as his personality, is the actor begging some creative filmmaker to make the most of his talents. The depth he adds to Mike’s primary adversary, an evil agent appropriately codenamed Laugher, was not necessary but contributes blissful complexity to the movie’s morality.

Sure to quickly disappear from multiplexes, American Ultra will hopefully find new life in homes, where many viewers can do like Mike and get high. It will probably be a blast under the influence. But one needs no altered consciousness to enjoy this alternate universe Clerks, where Kevin Smith had $12 million and envisioned his groundbreaking indie comedy with violent gunplay and a higher body count.