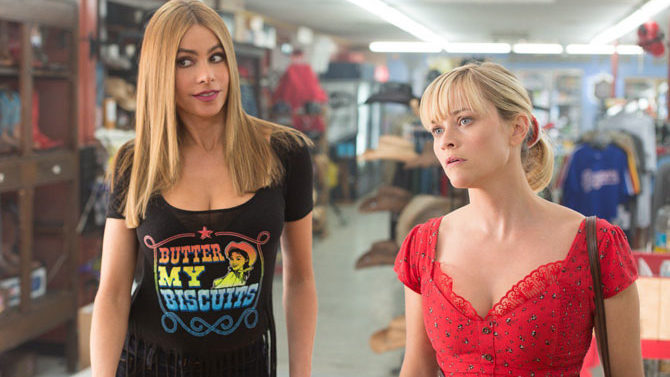 These sorts of ill-conceived, high concept buddy comedies are a Hollywood staple. Find a couple of mismatched big names and team them up for some outlandish tomfoolery. As Hot Pursuit’s odd couple, Reese Witherspoon and Sofia Vergara play a tiny, uptight policewoman and the high-maintenance federal witness with drug cartel connections. Nothing creative going on with this casting; one should be able to figure out which actress is playing which character by that simple description.

Despite a dearth of actually humorous gags, Witherspoon proves her charming value as a movie star. Her portrayal of Cooper—the daughter of a famed lawman, trying to live up to the expectations of her name—has a real humanity, something that was lost in the screenplay and in Vergara’s shrieking portrayal of a drug-boss widow. Until some talented writers find more to do with Vergara than fill out designer outfits and language barrier gags, she will be wasted in one-note roles.

With only half a dynamic duo and virtually no help from the supporting players—Michael Mosley could have been given more to contribute than a dirty cop—Hot Pursuit has difficulty generating any heat, not coincidentally the title of the Sandra Bullock-Melissa McCarthy hit that continuously comes to mind whenever this trailer pops up on TV. The differences between these two female-centered buddy copmedies simply highlights the importance of behind-the scenes-talent. The Heat, directed by Paul Feig (Bridesmaids), had it. Hot Pursuit, directed by Anne Fletcher (27 Dresses, The Proposal, The Guilt Trip) with a couple of sitcom writers, did not. Cancel the APB for this flick.