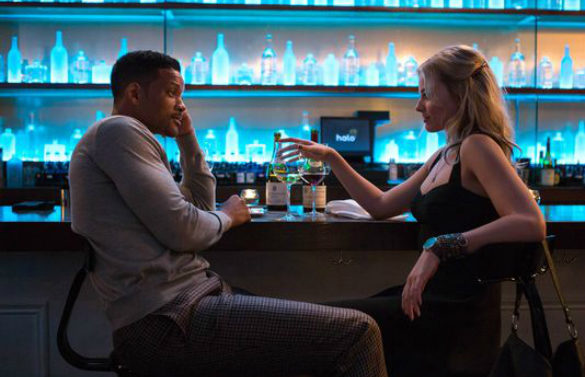 A good con man movie has most of the characteristics of a good con man. They are light, charming and able to rob you of your time as a good pickpocket can lighten you of your wallet. The magnetic former Fresh Prince, Will Smith, is the perfect superstar to attempt to rob audiences of their time and money and make them say thank you. Everything is going right for Smith’s Nicky until he meets Jess (Margot Robbie, who resembles a prettier, higher-class Jaime Pressly. After a successful scam at the “Big Game” in New Orleans, Nicky and Jess grow close. This relationship jeopardizes his next job, scamming a high-profile racecar owner, Garriga (Rodrigo Santoro). Even more dangerous is Garriga’s bulldog, Owens (Gerald McRaney, who really needs to be in more movies). The writing-directing duo behind the surprisingly excellent Crazy, Stupid, Love—Glenn Ficarra and John Requa (they first gained notoriety for writing Bad Santa)—don’t have as much success with their third directorial effort, but Focus works well enough.

This sort of film would usually pair Smith with an equally popular actress (think Julia Roberts and Clive Owen in Duplicity), but Robbie more than holds her own. She proves she’s more than a pretty face, though her physical assets certainly are on display. Like a good con man, the filmmakers need your attention in other places to effectively pull off their scheme. Robbie is a prime distractor.

After his turn as Nicky’s pal, Farhad, Adrian Martinez deserves to be known as more than that guy. Focus is better than most winter releases, and Smith can certainly use a hit, even a light one, after what would be considered a fallow period for a star as bankable as he has proven to be.