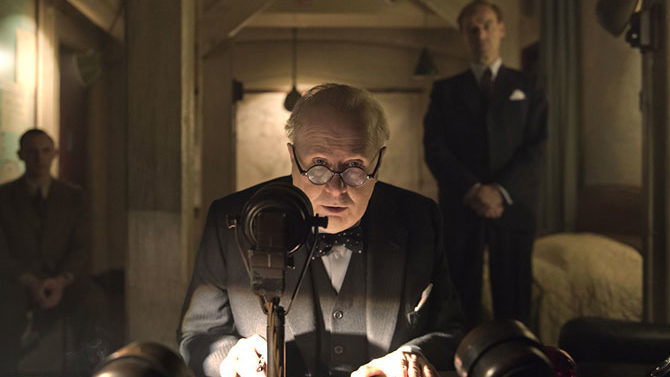 2017 has already delivered a lot of Dunkirk, with Christopher Nolan’s eponymous war film and Their Finest’s rom-com take on the watershed rescue. Joe Wright’s Darkest Hour places a high value on words, but sadly spends more time telling audiences how important Winston Churchill’s response to Dunkirk was when it should be showing it.

Gary Oldman certainly disappears into some tremendous makeup to play the highly recognizable historical figure, but he still does not quite resemble Churchill. It is more a performance of power than persuasion. Oldman is surrounded by a likable supporting cast—Lily James, Ben Mendelsohn and Kristin Scott Thomas—but the film is ultimately too static and stagebound. By its conclusion, most of Darkest Hour’s meetings blend together, leaving only memories of Oldman’s strength.

In one late sequence, Oldman takes the London subway and draws oratorical power from the British people on their way to work. Real or not, it is as effectively silly as any patriotic pablum found in the best Hollywood World War II epics, and the film’s single standout moment. Little else of Darkest Hour will be remembered a week later. Still, Oldman positions himself as a hard-to-beat Oscar frontrunner.