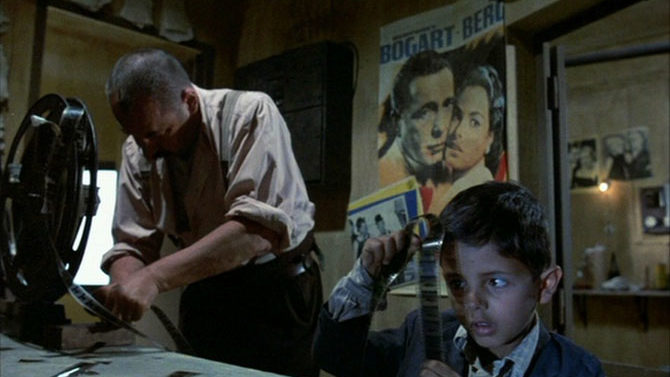 Made at Night: I was watching W.S. Van Dyke’s 1939 screwball comedy It’s a Wonderful World last week, which I thought I’d seen more than once before until I realized, about halfway through, that I never had. I kept waiting for the point at which it would become familiar, which didn’t come. It’s a good movie, with fine efforts by Claudette Colbert and James Stewart, two of the best assets a ’30s comedy ever had, plus Van Dyke’s characteristic fast pace and a smart, memorable Ben Hecht script: “I always thought criminals were gallant,” Colbert gushes mournfully as Stewart kidnaps her, “but you’ve got a stupid, degenerate face!”

It’s also got plenty of the agreed-upon hallmarks of the screwball genre (if it is oneâ€”is it?): a mismatched male-female pair thrown together by the wildest of circumstances; a healthy dose of antagonism between the two, especially, in this case, on the part of Stewart, operating in his most sullen mode and delivering an actual punch to Colbert’s chin; and a journey through unfamiliar territoryâ€”in this case, the darkened wilds of Westchester Countyâ€”that serves to unite the couple despite their apparent incompatibility.

That last is the part that keeps coming back to me: the literal darkness. Most of the film takes place at night, which is apparent even in the interior scenes. And that has reminded me that a large enough number of acknowledged screwball comedies are characterized by a preponderance of night and darknessâ€”particularly in their most crucial sequencesâ€”for that to constitute a legitimate trait of the classification. If you’re not sure, here’s a few, off the top of my head: It Happened One Night, Bringing Up Baby, His Girl Friday, The Awful Truth, Midnight, The Philadelphia Story, Holiday and this one. That’s not an exhaustive list at all, but it probably includes many of the first screwballs that come to most people’s minds.

Film noir, the cinematic style (note: not a genre, right?) that is supposed to have the darkness market cornered, pales in comparison when you look closely at more than just a few of the actual films associated with it: overall, you’re talking about subject matter (murder, essentially), mood (dour and fatal) and technique (frequent deployment of stark lighting to produce deep shadows), not setting: there are an awful lot of daylight and daytime scenes in very many of the police and detective movies that count as noirs. And the most thematically dark of American film genres, the western, is the one that most frequently sets its squalid tragedies in the broad, wide-open sunlight.

So, why do screwball comedies tend to venture so much deeper into actual darkness than the kinds of films that should logically do so? Maybe it’s because they’re about love, and the frightening, transformative compromises that succumbing to it demandsâ€”particularly, at least according to the films, on the parts of men like the ones who wrote, produced and directed them. Or maybe it’s because they’re about the existential threat to patriarchal order posed by spirited, intelligent women who act upon their desires. Who knows? Anyway, that, friends, sounds like a subject for a whole ‘nother column.

A Reminder: Anyone who is thinking about submitting to the Sprockets Music Video Competition had better get on the stick. The early deadline is Apr. 15 with entries submitted between then and the late deadline of Apr. 30 costing an extra ten bucks. Details and entry forms are at www.filmathens.net. And while we’re on the subject, you should be aware of the May 15 submissions deadline for AthFest FilmFest. Get your info on that at www.athfest.com/music-festival/film.

CinÃ© Is Five: CinÃ© is commemorating a milestone with its Fifth Anniversary Celebration: For the Love of Cinema for five of the next six Thursdays. The series features a quintet of classic films loosely united, appropriately enough, by the theme of film spectatorshipâ€”and all will be presented as they were meant to be seen, in 35mm prints. First up Apr. 12 is Cinema Paradiso, Guiseppe Tornatore’s lovely 1988 memory piece about the poignant friendship between a young boy and the projectionist at the cinema in a post-WWII Sicilian village. Next on Apr. 19 is Woody Allen’s winningly nostalgic The Purple Rose of Cairo, followed by Quentin Tarantino’s Inglourious Basterds and Terence Davies’ The Long Day Closes. After skipping a week, the series wraps up with Preston Sturges’ 1941 masterpiece Sullivan’s Travels. More details are available at www.athenscine.com.

Speed Round: The Boybutante AIDS Foundation is holding two special screenings of The Adventures of Priscilla, Queen of the Desert Apr. 12 at CinÃ© to benefit AIDS Athensâ€¦ Read about the Fresh Look Athens International Children’s Film Festival at CinÃ©; it coincides with the opening of Tales of the Night, the new animated feature by Michel Ocelot, director of Azul & Asmarâ€¦ The next Bad Movie Night at CinÃ© is the landmark Frank Stallone vehicle Terror in Beverly Hills on Tuesday, Apr. 17â€¦ CineClub hosts a panel discussion on the art and business of animation and CGI at CinÃ© Wednesday, Apr. 18, hosted by UGA Film Studies Coordinator Richard Neupertâ€¦ The next ICE-Vision screening, at 8 p.m. Thursday, Apr. 12 in Rm. S150 of the Lamar Dodd School of Art, will be Jess Franco’s 1969 Venus in Fursâ€¦ UGA Cinematic Arts has been doing some cool programming this semester at the Tate Center, especially their 8 p.m. Thursday night repertory screenings. Coming up are 35mm prints of The Seven Year Itch Apr. 12 and The Royal Tenenbaums Apr. 19.