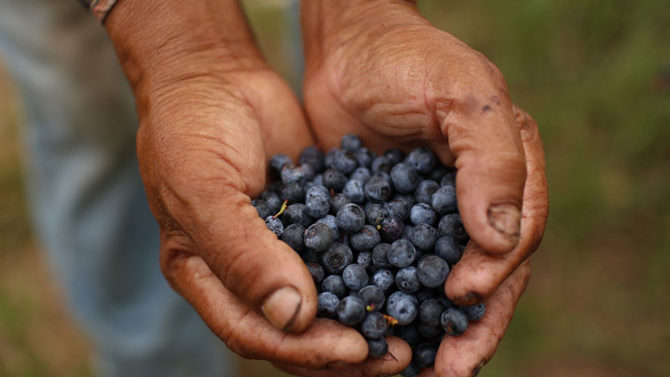 The state of Georgia is the largest producer of blueberries in the country, and one local farm enjoyed a big boost in its blueberry yield, thanks to the power of science.

To be fair, that’s kind of Spring Valley EcoFarms’ thing. The farm is a hybrid, pursuing academic and commercial goals. Founded in 1993 by Carl Jordan, professor emeritus of conservation ecology in the Odum School of Ecology at UGA (not to be confused with the former Athens-Clarke County commissioner), Spring Valley primarily serves as a research incubator for sustainable agriculture.

On the 100-acre site located off Spring Valley Road, students study a variety of sustainable farming methods that are meant to reduce the stress farming takes on the soil. Of course, all that research translates into production. Mason Miller, the farm manager, estimates that the farm produced around 10,000 pounds of blueberries on a half-acre plot.

“We have five times the blueberries we had last year,” says Miller, and he had to bring in more than 20 extra pickers to help him harvest. At the end of some days, Miller says he was prepping more than 400 pounds of blueberries for market. No matter what way you cut it, that’s an impressive yield. So, that begs the question, what is Spring Valley doing differently?

The farm’s approach to the blueberry crop was fairly straightforward, says Miller. Blueberries grow best in acidic soil, and they are particularly responsive to pine mulch. Spring Valley partnered with a local tree surgeon to collect his freshly ground pine mulch chips beginning in summer 2015. Last winter, Miller inundated the plants with this pine mulch. “We probably over-mulched them… but I’d rather go above and beyond than not get it right,” he says. The mulch, plus proper irrigation and few pest issues, must have done the trick, says Miller.

At first glance, running a conventional commercial farm as part of a research farm seems incongruous. Research farms have access to grants and academic funding, and their goals are aligned with research outcomes rather than profits. But Miller says the science and production sides of Spring Valley are like two sides of the same coin, because the goal is the same: to produce the best yields and best-quality crops they can.

Miller, a self-described good ol’ boy farmer, is sinking his teeth into the mission at Spring Valley. “I needed to learn some of the science side of it: what I need to be adding to my soil or taking out, crop rotations, you know, the science of sustainable eco-farming,” he says.

For Spring Valley’s researchers, Miller’s successes are proof that sustainable, eco-focused farming systems work. And beyond the farm’s research mission, Jordan was curious about what it took to be a commercial farmer. “It was an experiment, but at the same time a business venture for both [of us],” says Miller.

Spring Valley’s blueberries, along with other seasonal veggies, are sold at the Athens Farmers Market (Wednesday afternoons at Creature Comforts and Saturday mornings at Bishop Park), through the Athens Land Trust CSA and to local retailers like Independent Baking Co. and Piedmont Provisions. Excess produce is often donated to local food banks.

Sustainable practices are catching on at farms around the area, especially the use of cover crops. But these practices, says Miller, still aren’t commonplace on a typical commercial farm. But if the proof is in the pudding, then this blueberry-flavored batch may help spread the word that sustainability is the future.