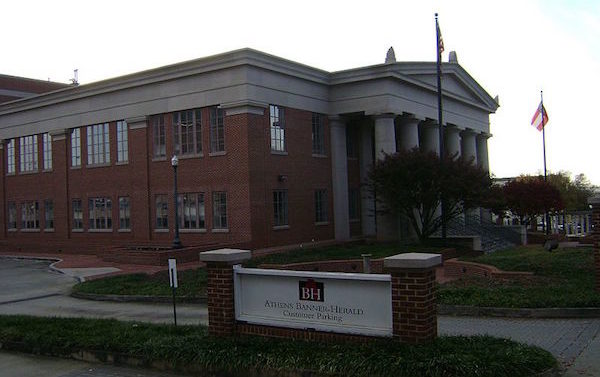 Over the past decade, the ABH has gone from occupying all of One Press Place to part of one floor to vacating the building entirely.
by Blake Aued August 16, 2022

When Morris Communications sold the Athens Banner-Herald and other publications to GateHouse Media in 2017 after years of gutting its newsrooms, there was little reason to be optimistic that GateHouse would do any better. After all, the new owner was a hedge fund with a history of buying local papers and systematically stripping them down to the bones to maintain high returns for investors.

GateHouse bought Gannett in 2019 and took the more respected newspaper chain’s name, but its business model remained the same—cuts, cuts and more cuts. Meanwhile, the corporate office tried one hare-brained scheme after another to goose revenue, like sports betting, without doing the one thing that might work, which is improving the core product, aka local journalism. That became apparent last week, when Gannett announced layoffs along with disappointing second-quarter revenue figures.

As a result, an already thin Banner-Herald will get even thinner. Local government reporter Stephanie Allen announced on Twitter that she was one of the victims of Gannett’s corporate greed. Veteran editor Bill Stewart is another of the three newsroom casualties. The entire community are victims, though, really, as their departures further decimate a newsroom that’s already seen dozens of positions eliminated over the past 15 years.

While Flagpole competes with the ABH, and we’ve tried to fill in the gaps created by its decline, we’ve always said the Athens community deserves a strong daily newspaper. Another round of layoffs, and there may not be a local daily at all.