Georgia and Florida Meet With Their Seasons on the Line 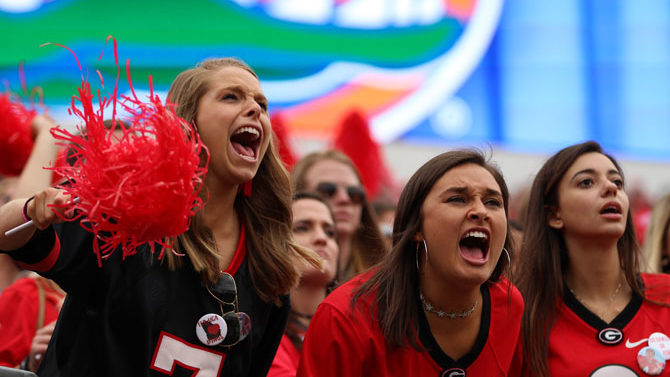 Georgia’s 20-17 double-overtime loss to South Carolina a few weeks ago not only changed the complexion of the Dawgs’ season, but also of the entire SEC East. For the last two seasons, Georgia has been the undisputed overlord of the East. Before the Gamecocks rolled into Sanford and beat the Dawgs, Georgia’s last loss to a team in the East came against Florida in 2016, Kirby Smart’s inaugural season as head coach.

It’s those same Gators that stand to benefit from Georgia’s current slide. Although Florida wasn’t able to capitalize on South Carolina’s upset by nabbing a win against LSU later that same day and vault itself into the National Championship conversation, it’s still 7-1 on the season (4-1 SEC) and leads the East by virtue of its sole loss coming against a team in the SEC West.

But the Gators will have another opportunity to get into the title convo this coming Saturday against Georgia at the World’s Largest Outdoor Cocktail Party in Jacksonville, while Georgia has an opportunity to reassert itself as the top dog in the division and get back on track for another trip to the SEC Championship Game and potentially the College Football Playoff.

Bragging rights are on the line at the Cocktail Party, as always, as is supremacy in the East. But there’s another added layer of depth to the game this year, as well. The last two seasons have led Georgia fans to believe that the East would be ours for the taking for the foreseeable future. Now, Florida has a chance to force a power shift in the division well before anyone expected. It’s no exaggeration to say that both in a micro and macro sense, this season’s edition of the WLOCP will be as big as they come.

This will not be lost on Florida fans in Jacksonville. Although Georgia will enter the game as the betting favorite, Gators fans will sense a vulnerability from Georgia fans and likely be much jaw-ier than they’ve been the past two seasons, when they were clearly the inferior team and just shut the hell up. The days of a peaceful WLOCP experience in which we didn’t have to worry about spats with soldiers in the Jean Shorts Army were far too short-lived.

There needs to be some context added to these numbers, though. Mainly, we have to take into account that Florida has played a considerably tougher schedule than Georgia so far. The Gators have played games against top 10 ranked LSU and Auburn. Georgia has that win over top 10 Notre Dame on its resume, but it’s also faced two teams that were forced to play third-string quarterbacks, and it lost one of those.

However, non-traditional metrics also skew in Georgia’s favor, as well. In SP+—a predictive rating that measures a team’s future chances of success—Georgia leads Florida 26.4 to 20 following Week 8. Georgia has also been handed a 61.5% chance of winning based on ESPN’s Football Power Index. By all accounts, Georgia has been the (slightly) more impressive team this season.