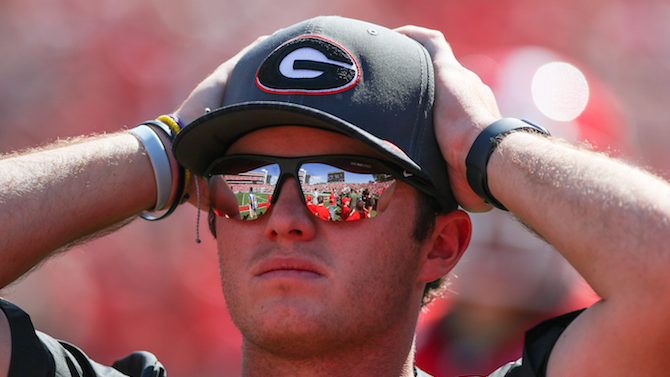 Georgia flirted with disaster against Notre Dame and Tennessee, but against South Carolina, it got on one knee and popped the question: Will you ruin our season?

The Dawgs lost to South Carolina 20-17 in double overtime on Saturday at Sanford Stadium, and, truth be told, they deserved it. Everything that had been going right all season—from Jake Fromm’s outstanding accuracy to the offensive line’s excellent protection to kicker Rodrigo Blankenship’s perfect record—went wrong all at once. All of that combined with the poor late-game management and conservatism that are quickly becoming Kirby Smart’s most defining characteristics resulted in the most disappointing and unexpected loss of the last three years.

The biggest problem of the game was one of the team’s greatest strengths up until this point: Fromm. Conventional wisdom has long been that the more Fromm passes in a game, the more likely Georgia is to lose. That bore itself out against South Carolina. Fromm went 28 for 51 through the air, setting career highs for pass attempts and incompletions, with 295 yards and a touchdown. He also turned the ball over four times—three interceptions and one fumble—after having not turned it over once in the five games prior.

The defining moment of the game, and perhaps ultimately the season, was a 53-yard pick six late in the first half to give South Carolina a 17-10 lead heading into the break. The other three turnovers, including one in the first overtime, killed any chance of Georgia beating the Gamecocks in a shootout. Any way you shake it, this loss is on Fromm.

But Fromm will share some of that blame, mostly with the much-lauded offensive line. Georgia’s offensive front simply failed to make lanes big enough for Georgia’s backs to consistently break big runs. Despite D’Andre Swift rushing for 113 yards, the team only rushed for a total of 173 and was consistently stifled on first and second downs. Fromm was also sacked three times after only going down once in the previous five games.

The most disappointing aspect of this loss is the fact that as bad as we played, there were ample opportunities to win the game. Time after time, Will Muschamp and South Carolina reached out and said, “Here, take the win,” to which Smart and the Dawgs replied, “Nah, we’re good.”

The most glaring instance of this came at the end of regulations. Having scored the game-tying touchdown with less than two minutes to go in the game, Georgia created an opportunity to win without overtime by stopping the Gamecocks on their ensuing drive and forcing a 57-yard field goal attempt, which South Carolina kicker Parker White missed by a mile. With eight seconds left, Georgia had reached the 38-yard line, just inside Blankenship’s field goal range, setting up a game-winning attempt as time expired. But Smart tried to get cute and gain a few more yards or burn a few more seconds by running another play, and the Dawgs committed a penalty pushing them out of field goal range. It was the most infuriating moment of an infuriating day and encapsulated Georgia’s pitiful play.

More opportunities to win were gifted in overtime, even after Fromm threw that pick. White missed a 33-yarder that would have won the game to keep Georgia alive before hitting a 24-yarder in the second overtime. A touchdown on that possession would have given Georgia a win, but it wouldn’t have been deserved. Instead, Blankenship missed his game-tying field goal attempt. Ball don’t lie.

My main takeaway from the game is that this team’s greatest flaw is a lack of killer instinct. That’s what kept us from boat-racing Notre Dame and Tennessee and what kept us from coming back against South Carolina. And, largely, that lack of killer instinct can be chalked up to offensive philosophy. Smart wants to pound and wear down opponents, which works great until you get behind the eight ball. Then there is no explosiveness, no big plays, which is exactly what you need to win games you shouldn’t. Smart knows how to win games one way: methodically. Until he decides to open up that offense up some more, losses like this will probably keep happening.

Photo Gallery: 2019 Boo-le-Bark on the Boulevard