Fromm Came Through in Georgia’s Win Over Florida 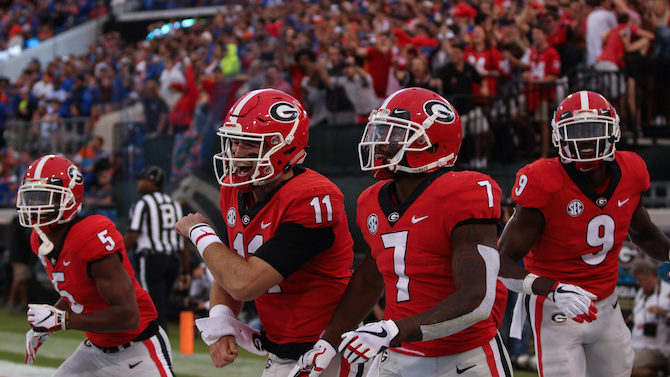 I’ve come to terms with the fact that Georgia probably will not dominate any opponent this season the way it did last season. Last season, there were multi-game stretches of beatdowns and near-perfect play. This season, the Bulldogs have not played a game yet that didn’t include poor coaching, poor execution or some combination of the two. Maybe it’s youthful inexperience, or maybe it’s a natural regression following one of the greatest seasons in UGA history, but this year’s Bulldogs ain’t last year’s Bulldogs, and this current crop still has a lot to improve upon if it’s to accomplish its lofty goals.

But they still beat the hell outta Florida.

Georgia defeated Florida 36-17 Saturday in the World’s Largest Outdoor Cocktail Party down in Jacksonville, the perfect bounce-back following a drubbing at the hands of LSU two weeks ago. Despite a sluggish first half that instilled belief in Florida that it could score an upset and knock Georgia down a peg or two, the Dawgs played one of their best second halves of the season to rip victory from the gummy jaws of a toothless Gator nation.

The win over Florida was necessary for Georgia’s drive to repeat as SEC East champs, but it didn’t put the division on ice. Georgia will have its chance to do that next weekend in Lexington, when it faces Kentucky in a winner-take-all showdown, a de facto SEC East championship game. (File that under “sentences I never thought I’d write.”) And there’s a lot that needs to be fixed if it is to get past a good Kentucky team next week, and still more if it’s to beat Alabama or LSU in a potential SEC championship game. Because despite the 16-point margin of victory against Florida, Georgia committed plenty of unforced errors that could’ve led to a loss against a different team on a different day.

But let’s start with the good news: Jake Fromm. The sophomore was under fire after he played the worst game of his career against LSU, and he responded with one of the best games of his career against Florida. Fromm was an efficient 17-of-24 passing for 240 yards and three touchdowns, including a crucial 24-yard dime to Terry Godwin that created separation in the fourth quarter. It was the kind of performance we all knew Fromm was capable of but had yet to see this season.

A lot of credit for that should go to Kirby Smart for sticking with him in the WLOCP. There were plenty of folks calling for Justin Fields to start, or at least be handed a few drives after Fromm’s showing in Baton Rouge. But Smart decided to make a statement and make it clear there is no QB controversy by playing Fromm and only Fromm under center in Jacksonville, and Fromm rewarded him by playing lights-out.

Now for the bad news: the poor coaching continued. The biggest criticism of Georgia following the loss to LSU was that it was badly outcoached by Ed Orgeron and his staff, with Smart often getting too cute for his own good. The game against Florida did nothing to assuage the fears that that could become a trend.

Two coaching decisions in particular stood out. The first was the decision to run a jet sweep to Mecole Hardman on third-and-one in the first quarter, a call that is, in my mind, inexcusable when you have the stable of tailbacks Georgia has. It immediately conjured images of the fourth-and-one play against Vanderbilt two years ago, when offensive coordinator Jim Chaney opted to hand the ball to Isaiah McKenzie instead of Nick Chubb or Sony Michel.

The second, and more egregious, was Smart’s decision not to use a timeout before Florida punted with about a minute remaining in the first half. The ensuing drive was Georgia’s best of the game, as Fromm hit tight end Isaac Nauta four times to drive 75 yards in 48 seconds and nail a crucial field goal. But with little time to get off plays at the goal line, Georgia was forced to kick that field goal on second down and went into the half with two timeouts remaining. A timeout before the punt would’ve saved Georgia 40 seconds and allowed it to use the other two downs to get six points instead of three. That’s the kind of avoidable mistake that will bite you against better teams.

There’s also the matter of the six-play, zero-yard drive following a turnover that gave the Dawgs the ball on the Florida one-yard line in the third quarter. It was one of the most maddening things I’ve ever witnessed as a Georgia fan, and I might have a conniption if I write about it too much, so I’m going to stop now.

All that said, it speaks volumes about the state of the program that everyone agrees that the team isn’t playing at the level it should, but has an average margin of victory of 19 points and could clinch the East with a game against Auburn to spare. If Smart and his Dawgs manage to get their act together and play to the standard that they set last season, anything is possible. And if they don’t, we still beat the hell outta Florida.

Vote Early This Saturday or at Expanded Locations Next Week