From Shots to Sorcery, Wizard Weekend Is Grown-Up Fun for Local Nerds 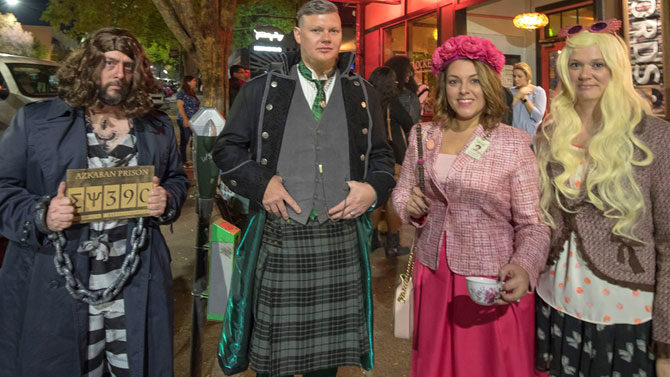 If you’re downtown this weekend, watch for wizards. On Oct. 19–20, Markster Con’s Wizard Weekend returns to Athens for a second year. The city will be filled with fans of the Harry Potter series—as well as wizarding in general—as they attend the Wizard’s Ball at Live Wire Athens on Friday and a Wizard Pub Crawl on Saturday.

Wizard Weekend began in Atlanta in 2014. Last year, Markster Con founder Mark Baggett decided to bring it to Athens. “There is a very creative element to Athens,” Baggett says, adding that many Athenians had reached out to him to suggest that he bring the event to town.

The Wizard Ball will feature a costume contest, and awards will be given to best overall wizard (male and female), best group, best craftsmanship, crowd favorite and best wizarding-inspired costume. Sign-up ends at 11:30 p.m. Friday.

“It gives people a creative outlet to be as simple as they want to be with their costumes, or [to] spend a lot of time making their costumes,” Baggett says. At first, Baggett was concerned that, in a college town, fewer people would dress up. But he says last year saw a great selection of costumes, and he hopes this year will rival it.

On Saturday, Iron Factory, Sandbar, Flanagan’s and Boar’s Head will host wizards and muggles of all kinds for the pub crawl. Registered crawlers will get a personalized attendance letter, Wizard Weekly newspaper and a free drink ticket. The bars will boast wizarding decor and themed special drinks for attendees.

Last year, at the first Athens event, Baggett says around 500 people attended the pub crawl, and 400 attended the ball. Baggett points out that Potter fandom ties into UGA culture, since a lot of fans are now young adults. “They’re able to escape the reality of going to this class that they completely hate to where they can say, ‘Hey, I would love to be able to take a class in potion making or the dark arts or magical herbs,’” Baggett says.

All of the weekend’s events are adults-only, with the ball being 18-and-up and the pub crawl 21-and-up. “It gives people an opportunity to revisit their childhood or their fandom, but not have to worry about being limited as far as being in a family-esque environment,” Baggett says, though he adds that he eventually hopes to expand the two-day affair to include a Sunday event that would be all-ages.

To manage his nearly 20 Markster Con events a year, Baggett brings five or six staff members and enlists local volunteers to help with setup and organization. His wizarding events have spread to neighboring states like South Carolina and Florida, giving people a place to immerse themselves into the fandom and culture.

“A lot of the other crawls that have come to Athens are not as geek-oriented as the wizard pub crawl is,” Baggett says. “…[O]ffering a direct link to the geek community kind of allows people to come out and raise their geek flag high.”

People of the wizarding persuasion tend to be friendly and accepting, especially to those in their same “house,” and Baggett says that even if one attends Wizard Weekend alone, one will make friends.

“It gives people the chance to come out and do something that’s unique and fun and creative and geeky—especially with it being such a strong fandom,” Baggett says. “Wizards have gone back through almost all of time, so it’s always been there.”