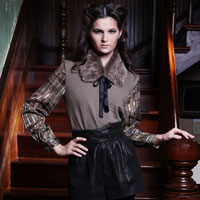 As the moon rises over the Georgia Theatre Friday night before this Halloweekend of Wild Rumpus parties, the Athens Fashion Collective will set the stage with its Fall 2012 Showcase of fashion, costumes, music and lights, luring everyone with its theme: â€œLose yourself to find yourself.â€

â€œFor this fashion show, we encourage everyone to come in costume to see yourself in a new light, maybe discover a new side of yourself and express it to others,â€ says Sanni BaumgÃ¤rtner, who founded the Athens Fashion Collective with Maggie Benoit and Rachel Barnes in fall of 2010. 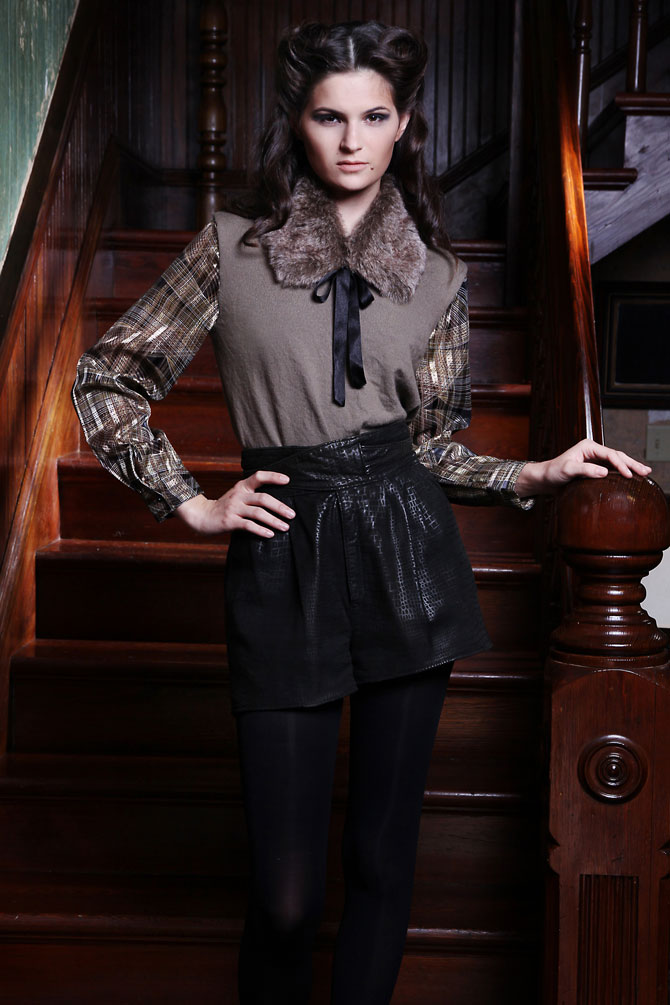 â€œIt really makes me proud of how far the idea of AFC has come,â€ says Barnes. â€œFrom just an inkling to have a casual fashion show that I had years ago to a production involving art, fashion and music at the Georgia Theatre no less.â€

In addition to the runway shows, the evening will also showcase floating aerial performances by Canopy Studio, as well as art installations by Patty Lacrete with ghostly projections by Mark Magnarella. Guests are also encouraged to wander up the stairs to the art gallery where you wonâ€™t need a sÃ©ance to feel the presence of the long departed: Agora owner Airee Hong will display selections from her collection of historic clothing that dates back generations. And, of course, there will be a wicked rooftop dance party.

â€œMy wish is for people to feel inspired by the collaborative efforts of those involved and feel free to be themselves, to experiment, to play, to dress up and be unabashed to explore the full expression of themselves,â€ says Benoit.

While Halloween costumes are typically “come as you arenâ€™t,” BaumgÃ¤rtner conjures the idea of everyday clothing telepathically sending a message of who you really are.

â€œThe clothes we wear can express so much about ourselves: what I do for work, how much money I have, which group I belong to, what team I favor, which university I go to, what magazines I read, which country I am from, what music I like,â€ says BaumgÃ¤rtner. â€œSome of these expressions are literal, like a print on a t-shirt, some more subtle, like wearing a certain style, that the group I want to be part of favors. Consciously or not, our clothing carries a message that other people read and react to.â€

She came to that realization the hard way.

â€œWhen I first came to Athens as an exchange student at UGA in the late ’90s, I barely spoke English,â€ says BaumgÃ¤rtner, who now owns the downtown shop Community. â€œFor the first six months I really struggled with not being able to express myself beyond the most essential words. I felt like I had been stripped of my personality, my ability to communicate who I was. The only way I could communicate was with the content of two suitcases full of clothing that I brought from Germany. Since then I have seen fashion as an essential and important part of self-expression.â€

But the Collective doesnâ€™t confuse self-expression with selfishness.

â€œAt our core, Athens Fashion Collective is always interested in sustainability and the community,â€ says Benoit. â€œOur challenge is to focus AFCâ€™s efforts towards always inventing in a manner that enforces sustainable and community-driven consciousness. At the end of the day, [the showcases] are about experimentation. Wearing a costume is, in many ways, experimentation.â€

This fall, years after her personal experience of using only clothes as self-expression in Athens, BaumgÃ¤rtner stumbled on an accidental fashion experiment with costumes in Atlanta. This time, she got to observe the effect from the outside, and, fortunately for BaumgÃ¤rtner and her friends, the villagers didnâ€™t turn on them with torches and pitchforks.

â€œI went to see the Dragon*Con parade because my husband [Don Chambers] was participating as one of the Box Heroes, a group of superheroes in fantastic cardboard box costumes,â€ says BaumgÃ¤rtner. â€œWe rode the MARTA train into town, and it was amazing to watch the reaction of the other passengers… When you think about all the possible clothing choices one can make, our standards of what is socially accepted are extremely narrow,â€ continues BaumgÃ¤rtner, whose redesigns will headline the fashion show. â€œIf you step outside these norms, people will reactâ€”sometimes in a positive way, like that day on MARTA, sometimes in a negative way… But fashion, like every art form, also has the ability to push those standards a bit, to make these boundaries wider and to open peopleâ€™s eyes to new possibilities of self-expression.â€

Pushing those boundaries of everyday fashionâ€”without crossing over to dramatic costumesâ€”is the intent of the Athens Fashion Collective. Designer Alexandra Parsons, whoâ€™s featured in the opening runway show, uses color, mood and texture to express that intent.

â€œMy Fall 2012 collection is about the woman who creates her own myth, and the man that inspires her along the way,â€ says Parsons, whose fall designs are influenced by the film Snow White and the Huntsman and various mythologies.

While the designers and artists will enchant the audience visually Friday night, live performances by Grass Giraffes and powerkompany will musically possess the crowd to dance and sway until Harouki Zombi materializes. The headlining duo, who are this week celebrating the release of their first EP, Objet Petit A, is Nina Barnes (of Montreal) and Orenda Fink (Azure Ray, who will not be performing Friday night because sheâ€™s on tour). They describe their live show as “part DJ/VJ dance party and â€˜neo-pathetic cabaretâ€™ performance art.” The crowd will then be transported to the roof for a DJ set by Immuzikation that will dance Friday nightâ€™s party into the festive Halloweekend.

â€œWe always love Halloween at the Theatre,â€ says Georgia Theatre owner Wilmot Greene. â€œIâ€™m blown away every year by the amount of outrageous participation. We like to put creative control into creative peopleâ€™s hands, and this Halloween that means Sanni and the Collective over at Community on Friday night and Timi Conley and the of Montreal folks on Saturday night. I mean, how much more creative could you get?â€